Top 10 Hell In A Cell Matches Of All-Time 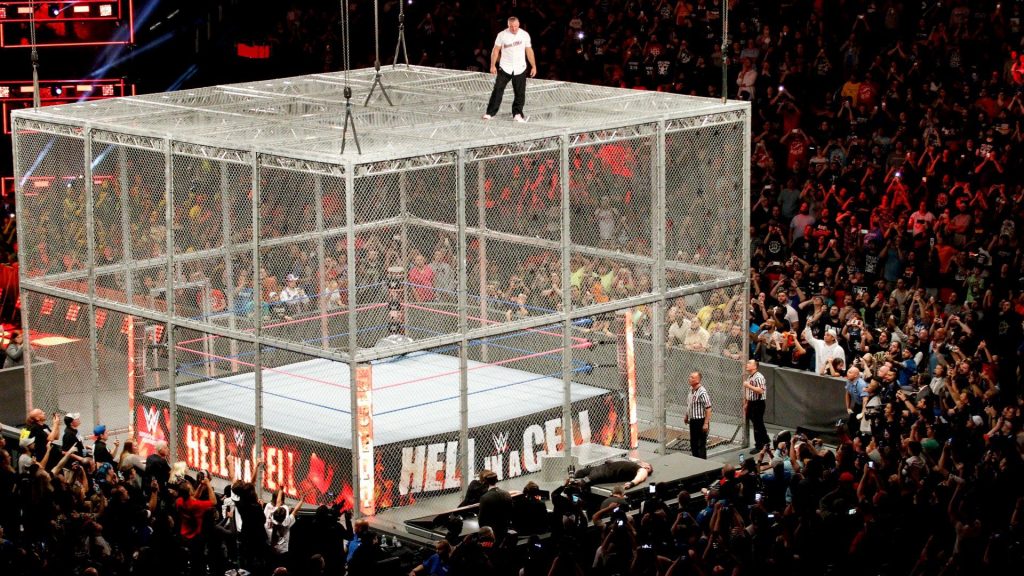 The heat of summer is fast approaching, as are the flames of WWE’s most hellish pay-per-view, Hell In A Cell. The towering, twenty-foot structure usually appears in October, but WWE have bumped the show to June for this year. We’ve been treated to some special and substandard cage matches in the past, but today, we’ll be focusing on the greats that’ve taken place inside (and occasionally outside) the chain walls, as we look at the 10 best Hell In A Cell matches of all-time.

Certainly one of the most chaotic affairs the cell has ever seen, as six of the Attitude Era’s biggest stars collided at Armageddon. Kurt Angle put his WWF Championship on the line against five other competitors, all of which going into the cell feuding with at least one other participant. Triple H and Steve Austin were going back and forth. The Rock was feuding with Rikishi over attempted murder (yes, you read that right). Then we had Undertaker and Angle, who’d been feuding over the title already. The GM at the time, Mick Foley, decided to throw all six men into a Hell In A Cell match at Armageddon for the WWF Championship. The match was fairly messy, but the action and chaos more than makes up for it, with plenty of entertaining spots littered throughout the match. Triple H dropped The Rock with a Pedigree on a car, Stone Cold smashed The Game with a camera, and the most memorable of all, The Undertaker chokeslamming Rikishi from the top of the cage onto a truck filled with sawdust. An incredibly jumbled match, with enough star power and spots to make it work. Kurt Angle overcame the odds to retain his WWF Title in the end, which he would later drop to The Rock at No Way Out the following year.

2019’s Hell In A Cell is remembered for all the wrong reasons, which is such a shame when you think about just how good the Raw Women’s Championship match was between Becky Lynch and Sasha Banks. The Man and The Boss opened the show in an extremely entertaining match, as the two put on an absolute stormer. Sasha Banks showed everyone yet again why she’s one of the best women’s wrestlers in the world, not taking away from Becky Lynch however, who also proved just how good a wrestler she really is. Sasha hit Becky with a Meteora from inside the ring onto a ladder, then locked in a kendo-assisted bank statement, before attempting to put Lynch through chairs, tables and the lot. The ending was just as exceptional, as Banks threw chair after chair into the ring, but before she could hit the Meteora to end it all, Lynch countered and dropped Sasha with a top rope Exploder Suplex onto the chairs, then locking in the Dis-Arm-Her for the win, retaining her title. Sasha Banks has shown time and time again she’s one of the best wrestlers to ever grace the mesh structure, having fantastic matches with Charlotte Flair and Bayley. It’s just a shame that the whole show was derailed at the hands of Seth Rollins’ toolbox.