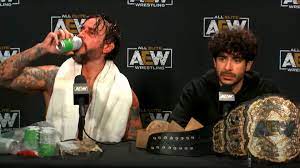 AEW has been in a big trouble with the CM Punk and The Elite controversy which arose from events following All Out media scrum. Punk went on a rant in press event and slammed Colt Cobana, Hangman Page and EVPs Young Bucks and Omega.

This led to a backstage brawl between the Elite and CM Punk who was with Ace Steel. AEW temporarily suspended all the individuals involved. With the reports being that they’re considering to fire CM Punk.

Dave Meltzer from WON reported that AEW will be looking to buy out CM Punk’s contract. But wrestling veteran Dutch Mantell believes it might not be as simple as it looks.

Mantell was speaking on Smacktalk where he said that he still thinks CM Punk will still be suing AEW president Tony Khan. He said that CM Punk is looking for an edge and he’ll see Tony Khan as an opportunity.

“I think he is still gonna end up in a lawsuit. I still believe that, they can talk all they want. And he can say whatever came in there and he could claim this and this. That’s what AEW doesn’t want. They don’t want to take it down to a lawsuit.”  – h/t ringsidenews