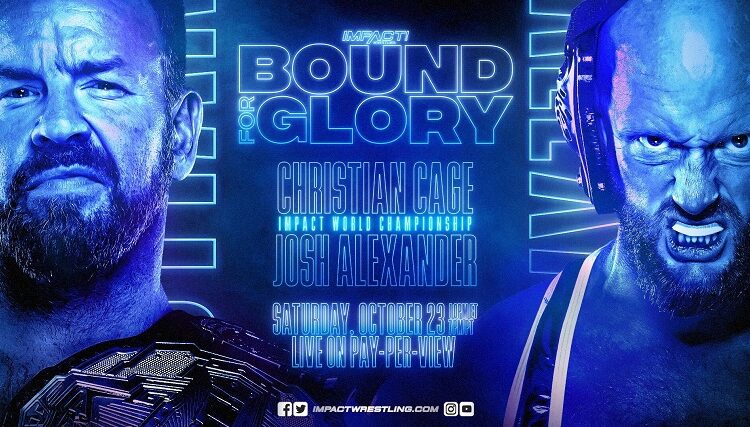 Whenever a wrestling promotion has their biggest show of the year they should give the fans the best main event possible and there is no question in my mind that with the pieces that Impact has at their disposal they have announced the best main event they possibly could. It’s a great story going into it because both men’s careers are almost identical in so many ways. Two men that are from Canada, they made a name for themselves in tag team wrestling in a very successful team, they were then thrust into a singles career and had to prove themselves as a workhorse.

As part of the North, over two tag team title reigns, they held the tag titles for 401 and were the most dominant team in TNA/Impact history. When Ethan Page decided to leave Impact and jump to AEW, the biggest question mark was what happens to Josh Alexander? I’ll be perfectly honest, I did not see the transformation into a singles star happening so quickly and so successfully. I kind of figured Impact may have thrown him into another tag team but Josh had something to prove and Impact believed in him and was willing to give him that opportunity.

The decision was made to place Josh in the X-Division, a once prominent and prestigious division but over the years much like Impact itself was trying to re-find its identity. The X-Division Championship much like WWF’s IC and AEW’s TNT titles, was long considered the workhorse title and arguably was the driving force behind TNA/Impact for years. Josh’s first shot at the title in February 2021 against TJP was unsuccessful but a few months later at Rebellion, Josh would defeat TJP and Ace Austin in a 3-Way to win his first singles title in his Impact career. It is often said winning something is the easy part but being able to keep it is the hard part. For the next 146 days, Josh Alexander would prove to the world that not only the X-Division still matters but that Josh Alexander is a talent that the world should be paying attention to as he put on performance after performance that not only elevated himself but the championship and the company that he represents. On a side note, at the same time Josh was doing this with the X-Division, Jonathan Gresham was doing the same in ROH with the Pure Title and both men have really had a hell of a year showing the world just how good they are.

For 146 days, Josh showed his dominance over the division and the question of who will beat him for the title is a question that will go unanswered as Josh chose to exercise a very unique concept that Impact has where the reigning X-Division champion can vacate the title for a Impact World Championship shot. At Victory Road, Josh successfully defended the title against Chris Sabin, who held the X-Division title more times than anyone at 8 reigns but Josh wasn’t done for the night after Christian successfully defended against Ace Austin, Josh confronted Christian and announced he was invoking Option C for a title shot at Bound for Glory (Impact’s version of WrestleMania).

Since making his shocking return at the Royal Rumble and jumping to AEW a few months later, Christian has had the comeback of the year. Christian defeated Kenny Omega for the Impact World title and just came up short at All Out in his match against Omega for the AEW World title. Christian is continuing to build onto his legendary career as he has returned to the place that gave him his first opportunity to be world champion that being TNA/Impact. Christian very much likes giving back to the younger generation and just being in the ring with the young talent of Impact helps all involved. Impact and the Impact World Championship means a lot to Christian and it is clear to the fans that he does care and it makes this match mean that much more because you have two men that love this business and want to represent Impact.

This is a match with two men that will outwork anyone and that makes for potentially one of the best matches of the year and that is just on paper before they even build to the show. This is a match that any wrestling fan that truly loves wrestling will go I want to see this match and it will get people that were on the fence about buying the PPV to buy it. As I previously stated in another article, that the Impact World Championship on Christian was primarily to be a transitional champion that would drop to an Impact star because either Kenny Omega and/or Tony Khan didn’t want him losing to an Impact star. Christian has shown over his career that he doesn’t have a problem putting talent over and he is such a legend at this point a loss does nothing to his legacy but a win over him does a hell of a lot for the career of Josh Alexander.

At Bound for Glory, it would be the perfect place to have Josh Alexander defeat the legendary Christian and become the first man in a year to be an impact star to hold it’s top prize. In Las Vegas, the gambling capital of the world, Josh is betting everything by giving up his X-Division title just for the opportunity to become the World Champion. The only thing certain about this match is that the fans will get their money’s worth as both men want to show the world that they are the workhorses of their respective companies and that Impact and the Impact World Championship does matter.

As crazy as this world has been since the pandemic, the wrestling world has had an insanely entertaining 2021 and all the companies have come out with a bang and as the year is coming close to an end, it doesn’t appear that Impact is slowing that trend down.