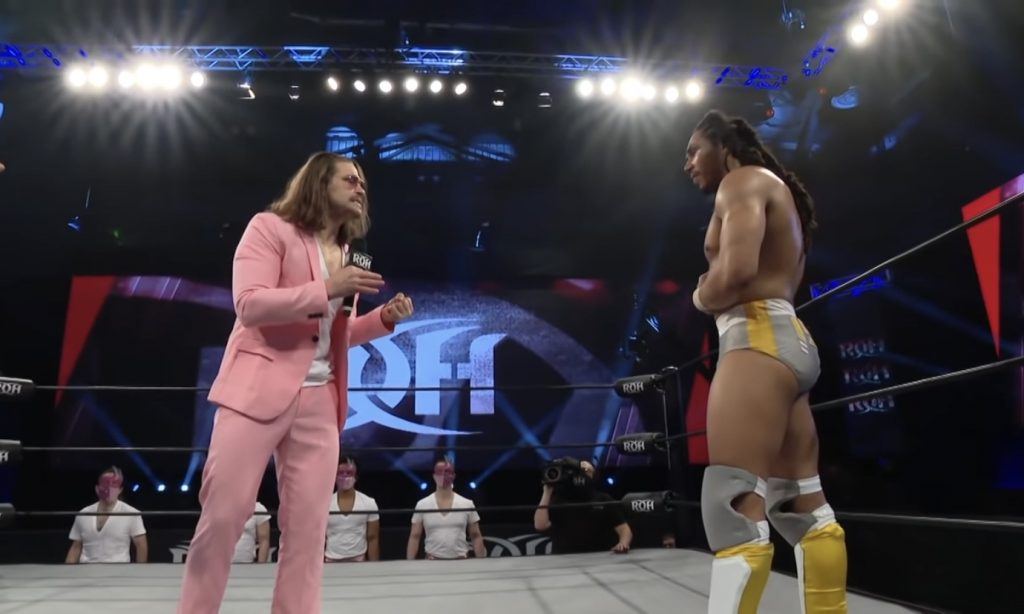 Coming off two fantastic weeks of Ring Of Honor television, especially the 500th episode last week which brought back a lot of eyes to the product, this week ROH was under pressure to deliver another great show to keep returning fans invested!

GOOD: As per usual, Quinn McKay kicked off ROH by hyping up the show and excitedly revealing to everyone watching what was set for the episode. Many people have criticised Quinn McKay in the past for being too over the top, but I find it impossible to not be at least somewhat interested in a show, even with a weak card, after she has hyped it up.

GOOD: Dak Draper then cut a fairly basically cocky heel promo on Eli Isom, but executed it for what it was perfectly

GOOD: Eli Isom followed this up with a charismatic ‘babyface’ promo which highlighted this young stars ability on the mic.

GOOD: Eli Isom and Dak Draper kicked off the in ring action for the night with an awesome match between two of the brightest rising stars in Ring Of Honor. The match ended in a draw after reaching the 15 minute time limit in a match which absolutely flew by!

GREAT: Eli and Dak then agreed to go five more minutes, however before it could get started again the lights went out and Dalton Castle returned! He came out in what was a grand entrance with his boys, and said that everyone in Ring Of Honor has seemingly forgotten that wrestling isn’t just about in ring action. He reminded everyone that this is also a TV show and that drama is needed to spice everything up. He told both Eli and Dak he saw something in them. He then walked up to Dak and said he liked what he saw when looking at him, but then turned around and told Eli the opposite before kicking him Eli with a low blow! Castle then told Dak that that’s what ROH has been missing, the drama! However then Castle turned on Dak too with another low blow. Fantastic performance by Dalton Castle here!

GOOD: Each member of VLNCE UNLTD then cut a promo on the main event match tonight against LFL in a promo that added some depth to the newly founded group.

GREAT: ROH then showed a recap of Dixon turning on the ROH DOJO trainees and joining BCB from a few weeks ago. The two then got interviewed by Quinn McKay and Dixon cut one hell of a promo!

GREAT: Before the main event, The Righteous came out to address the fact that Vincent has been missing since the 19th Anniversary show. Bateman led the promo and delivered it to perfection and gave it one hell of a creepy feel. The fact the commentators were very silent and only spoke quietly added a sense of fear to the segment too

GREAT: Kenny King, while standing beside his partners in La Faccion Ingobernable, delivered a really damn solid promo on VLNCE UNLTD. He threw shots at each member of the new faction before RUSH took the promo over to wrap it up in Mexican in what translated as ‘All Of You Dogs Will Be Destroyed’.

AVERAGE: In the main event La Faccion Ingobernable went to war with LNCE UNLTD in a 6 man tag match. The match was beyond chaotic from the get go and while it was undoubtedly fun, it was also messy, but I guess that was the point of the match. It ended with a no contest after both teams started bringing weapons into the match.

GOOD: As the show went off the air both teams were in a massive brawl with each other around the ringside area, and this brought a lot more hatred to the feud.

Overall this week’s episode of ROH TV was undoubtedly weaker than the past two weeks. However with that said this week’s episode progress storylines fantastically and really built on stories that haven’t been built on much as of late. The opening match delivered and the main event did what it needed to do, but the fact there was no winner in either of the matches on the show really harmed it. With that said, the show went past in a breeze and felt super easy to watch from start until finish and once again the production was solid.