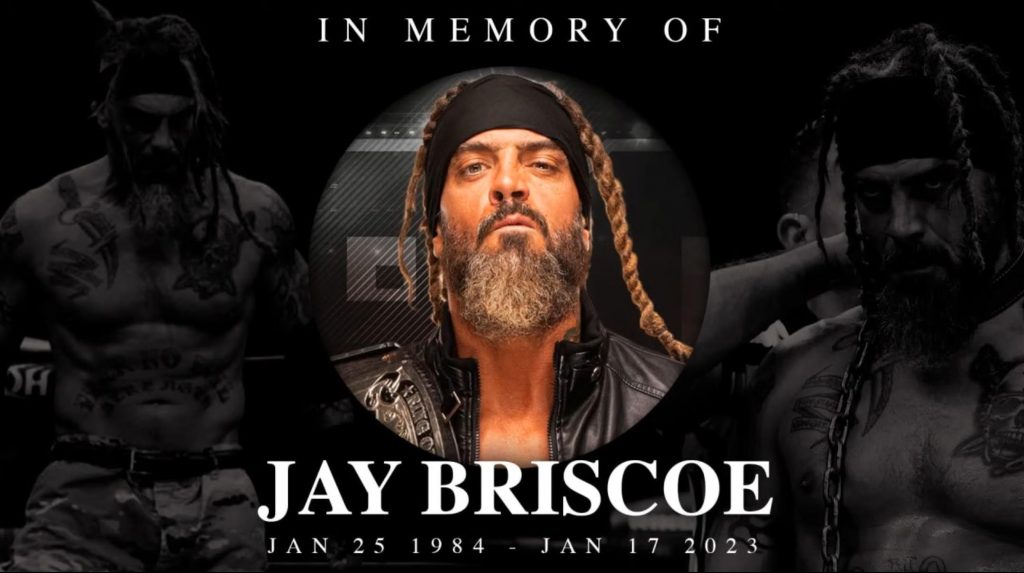 “Death comes to all, but great achievements build a monument which shall endure until the sun grows cold.”

Note: This is a collaborated piece written by Head of Opinions, Anthony Ricciardi and Reviewer, Clark Taylor.

It never gets any easier writing these types of pieces because tragically after watching wrestling as long as we have, we have seen a lot of wrestlers pass away young and unexpectedly. The death of Jay Briscoe at only 38 years old, is so truly tragic and our thoughts and prayers go out to Jay and his family during this unimaginable, difficult time.

The death of Jay suddenly and so young reopens old wounds of wrestlers that we have lost suddenly over the years like Owen Hart, Brodie Lee, Chris Candido and Eddie Guerrero for example. The pain of losing a loved one is something everyone can relate to because we have all suffered that pain in our lives and it is heartbreaking. The wrestling community as a whole can be combative and argumentative most of the time, but when one of our own passes away the fans and industry rallies together to honor the fallen.

“Carve your name on hearts, not tombstones. A legacy is etched into the minds of others and the stories they share about you.”

This quote above defines exactly what Jay Briscoe did with his 38 years of life on this planet. He left an indelible legacy on this industry that will never be forgotten. For almost 23 years, Jay Briscoe gave his blood, sweat and tears to the industry that he loved more than any other.  He and his brother, Mark, cemented a legacy in tag team wrestling that no one else can come close to matching. Both in the ring and out of it, they gave everything to this business and most importantly to their fans.

Part of the appeal of the Briscoes was that they were so easily relatable and their love and passion for the business was so genuine, which is why we fans loved Dem Boys for over 20 years. There are very few tag teams that can honestly say they truly elevated tag team wrestling like the Briscoes. They dominated the tag team title scene anywhere that they went and picked up tag gold everywhere they went.

Much like Tommy Dreamer is considered the heart and soul of ECW and the Undertaker is considered the conscience of WWE, the Briscoes were these things to ROH. There is no one else that truly defines ROH and what it stands for like the Briscoes. They were the pillars of ROH for 20 years and they were the measuring stick for every talent in ROH or talent thinking of joining ROH.

They worked with a virtual who’s who in tag team wrestling over the past 20 years. The Briscoes always made sure to not only elevate themselves no matter who they were working with, but to elevate their opponents, the titles and the brands that they represented. Both in the ring and out of it, the Briscoes were constantly giving back to the business whether it was their tight bond with the locker room or being there to connect with their fans as much as they possibly could.

Both in front of the camera and behind the scenes the Briscoes not only improved their generation of tag team wrestling but will likely directly inspire future generations of wrestlers that were fans of the Briscoes.  The outpouring of love and support from across the wrestling community shows just how much Jay Briscoe was loved and respected by his peers in the brotherhood of professional wrestling.

During their 20 years plus career, the Briscoes amassed a staggering 27-tag team championship reigns. Of those, thirteen of those reigns occurred in ROH. Their last appearance in ROH was at Final Battle 2022, when they successfully regained the tag team championship in a tag team dog collar match. This match was one of the best matches in 2022 and even made Anthony’s top 5 matches of the year.

One of the biggest tragedies is that the Briscoes were never given an opportunity to perform on the world’s biggest stage whether in WWE or AEW. They were constantly being denied opportunities because of some horrible comments that Jay Briscoe made years ago which he apologized for multiple times. Unfortunately, it was something that neither WWE nor AEW were willing to look past in order to sign them and have the Briscoes appear for their promotion. Jay Briscoe was not perfect, and neither is anyone else, but Jay Briscoe was tragically denied forgiveness.

“The greatness of a man is not how much wealth he acquires, but in his integrity and his ability to affect those around him positively.”

This is so hard to write, as a longtime fan of the Briscoes. Thankfully Anthony Ricciardi has provided an outstanding tribute to both the life and career of Jamin Pugh for me to add to. Tragedy seems to strike all too often in professional wrestling and while any loss is brutal, to lose someone so strong and full of life as Jay is hard to quantify. As Anthony covered earlier, both Jay’s singles track record, and his multiple time tag title reigns with his brother Mark speak for themselves. Beyond that though, they were as real as it gets in professional wrestling.

Dem Boys had an intoxicating style both in the ring and on the microphone. One of the things I’ll miss the most about watching Jay perform was his unrelenting physicality. Every match was believable, he always brought it. Jay’s promo style was so unique and so his own, always leaving you interested in his next encounter. He’d stare right into the camera, eyes wide, neck veins bulging as the intensity level raised, while he spewed subtly clever venom at whoever he or Dem Boys next opponent would be. Most times filmed on the farm, as one might expect from arguably the realest wrestler of all time. My lasting memory of him however has nothing to do with wrestling at all, it is from a video he filmed during the beginning of the pandemic in 2020, running through his daughter’s cheer routine with her in the family room at their home, bow in his hair and all. He was more than just a wrestling legend, much, much more.

Shock and devastation describe what we are all going through right now as a wrestling community. Jay painted masterpieces in that ring as both a singles and tag team wrestling that will define and ensure his legacy lives on in this business along with his fans that will continue to tell the tales to future generations just how great the Briscoes were.

Mark will definitely carry on the legacy, and his talent is not to be forgotten, the day following the tragedy was Mark’s birthday and my heart breaks for him and the whole family. The loss of the performer Jay Briscoe is hard enough, but he was also a son, a brother, a husband, and a father. We give our best wishes to his wife Ashley Pugh, daughters Gracie and Jayleigh, his son Gannon and brother Mark as well.

Thank you for everything that you gave us fans over the years and you will never be forgotten. You are a true legend and pioneer both in and out of the ring.

This tribute video by Mad Monk Tavern perfectly encapsulates the greatness of the Briscoes: