Honestly: Danhausen Is Wrestling’s Most Evil Must See Attraction 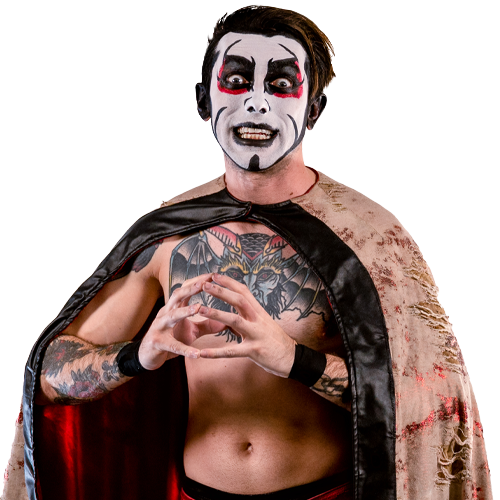 I’ll be 100% honest here, I never thought I would be writing a piece on this man when I first saw him in ROH but here we are with me writing this article and you reading it. The first time I saw Danhausen on ROH TV in 2019, I’ll be honest the character didn’t fully click with me. I wasn’t sure if he would be around very long or if he would be used like a Cheeseburger or Delirious in helping to get other guys over. The more I saw him, the more the character connected with me and the audiences before the pandemic were responding to him as well. Danhausen maybe the best character in wrestling today. Danhausen had the one thing missing in today’s wrestling, when you are playing a over the top character you need to fully commit to it. I’m not saying he is today’s Undertaker but Undertaker rarely if ever did interviews out of character and Danhausen is doing the same thing.

This career almost didn’t happen for Basil Mahmud, the man behind the paint, he was wrestling on the independent scene and in his own words, he would have great matches  with guys like Johnny Gargano and Ricochet but he was just another wrestler that didn’t have a character to connect with the audience. The audience just didn’t care who he was, he was just some guy wrestling Johnny Gargano. He was working as a nursing assistant and was going to quit the wrestling business because he was getting injured and losing money on the indies just going to the shows. However, before he quit he wanted to try a horror character and it started to connect with the audience. When he first did it the character was completely evil and he would do different face paints until he found the right one that the audience really connected with which is the version you see today. He would slowly tweak it into the character that you see today by adding the very nice to the very evil. The character started taking off and it became his full time job and he ended up leaving his nursing job.

Not since maybe Matt Hardy became Broken in Impact Wrestling, has a character outside of WWE or AEW gotten so over without a major network TV presence. No offense to ROH but syndicated TV and a streaming network is not the same thing as the USA Network or TNT that has wide exposure. Danhausen though is not just depending on ROH for his exposure though as his YouTube channel, Love That Danhausen, Twitter, Instagram and even his Patreon is his outlet to further expose his character.

The man fully commits to the gimmick and it is connecting with the audience. This connection forced ROH to sign Danhausen in 2020. Danhausen started his career in 2013 on the independent scene but if you look on his official ROH bio it says he debuted in 1993, he is 6’4 and at least 300 pounds. I believe he also claimed to be 3000 years old on TV. In truth, Danhausen is only 31 years old and unlike so many other people that enter the wrestling business he knows his career could end in an instant with one wrong move in the ring or his popularity could end, so he is smartly getting his image out there whether appearing on podcasts and merchandising himself outside the wrestling business.

Almost always Danhausen appears in character with full makeup for interviews but for one of those rare interviews that he did with Conan O’Brien, he appeared out of makeup and out of character. He stated he was inspired by Conan and people call the Danhausen character a possessed Conan O’Brien, which got a big laugh from Conan.