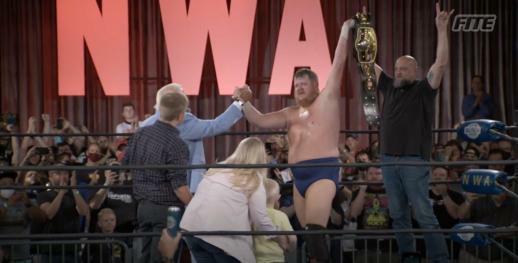 At this weekend’s NWA 73rd Anniversary Show, the NWA World Heavyweight Championship changed hands. Nick Aldis’ history 1,036 day reign came to a shocking end when he was defeated by former WWE World Tag Team Champion, Trevor Murdoch. The former Impact World Champion won the belt all the way back in October 2018, when he beat Cody Rhodes at NWA’s 70th Anniversary, to begin his second reign.

Of course, this isn’t Trevor Murdoch’s first taste of NWA gold, as just last year, he won the NWA National Championship at UWN Primetime Live from Aaron Stevens. Murdoch certainly hasn’t had a quiet career in NWA, and I personally, cannot wait to see what he does next.

What do you think? Are you happy to see Murdoch as World Champ? Or are you upset to see Nick Aldis lose. Let us know in the comments below.