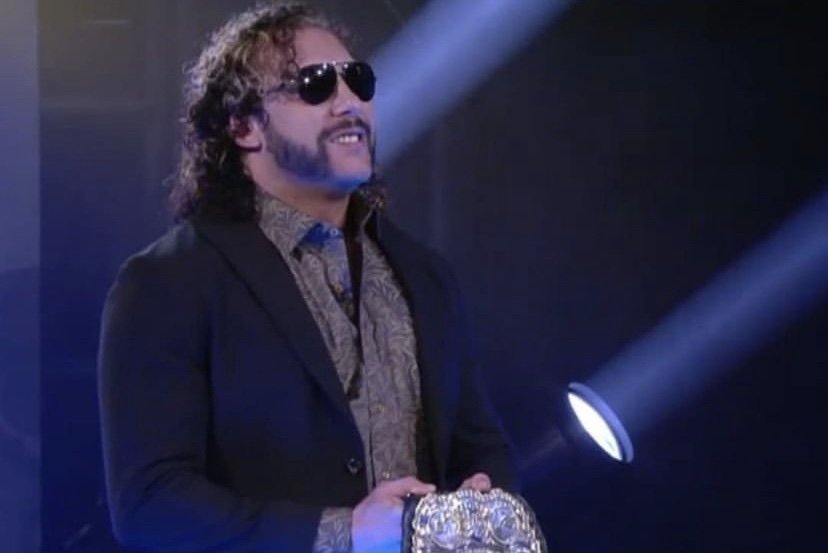 GREAT: The final edition of AEW Dynamite to take place inside of Daily’s place during the Pandemic era opened with the Young Bucks taking on the team of Eddie Kingston and Pentagon Jr in a tag team title eliminator match. The layout of the match followed several recent Young Bucks tag matches, with a lot of interruptions, biased refereeing, and a lot of fun spots and kick outs. At this point a crowd going crazy for Eddie Kingston shouldn’t be too much of a surprise, but wow was he over during this match. Kingston and Penta getting the surprise win felt like a huge moment, and I look forward to seeing the rematch, but this time for the titles, down the road.

GOOD: Christian Cage is backstage with Jungle Boy, where he gave him some feedback on his loss against Kenny Omega, as well as stating that he doesn’t believe in win or lose, but instead win or learn. Luchasaurus then walked into the room making his return, and thanked Christian Cage for having Jungle Boy’s back while he has been away.

GREAT: Ethan Page, alongside Scorpio Sky, came out to the ring and cut a promo on Darby Allin ahead of their coffin match next week. Sting then came out with a coffin, before revealing that Darby was inside it. The two then took out Page and Sky. Once Page had made his escape, he grabbed his mic back and announced that the match for next week is off, but if Darby doesn’t touch him again, they can do it in two weeks time at Fyter Fest.

GOOD: Jungle Boy defeated Jack Evans in a fairly short encounter which got Jungle Boy back to his winning ways after his world title loss.

GOOD: After the match the Hardy Family Office attempted to take out Jungle Boy, however the Jungle Express alongside Christian Cage made the save.

MUST WATCH: A pre recorded MJF promo then airs where he is seemingly in a car park. He isn’t one bit happy at the fact he was attacked during an interview last week, and stated that Jericho’s recent actions have shown that he is no longer the wrestling genius he once was. MJF then reveals that next week he will give Jericho several stipulations, and if he beats all the stipulations, Jericho will then get one final match one on one with MJF. He then ends the promo by stating that tonight the future star of AEW will become clear, and that the future star will indeed be Sammy Guevara, as the match will prove that MJF is the biggest star in AEW right now.

GOOD: Andrade is interviewed backstage where he challenges Matt Sydal to a match next week after being interrupted by him last week.

MUST WATCH: Kenny Omega then came out for an interview with Tony Schiavone where he spoke about his win over Jungle Boy, and how he now planned to take some time off as there was no one left to challenge him. The Dark Order then came out and Omega went on to laugh at the possibility of any of them challenging him…..however it soon became clear they weren’t there to challenge Kenny Omega, but instead remind him that he has not defeated everyone, as he is yet to have taken on the number one ranked Hangman. Omega quickly becomes visually annoyed, and stats that if they were talking about the person he thought they were talking about, he doubted that person would be too happy about the fact the Dark Order came out to confront him, as that person doesn’t have the guts to challenge for the AEW Championship. Omega then walks away while the crowd chant ‘Hangman’. Absolutely perfect way to start this feud.

GREAT: Ahead of his TNT Title challenge, Brian Pillman cut a pre recorded promo on Miro

GOOD: Despite Brian Pillman giving his best effort, Miro retained his TNT Championship in just under 10 minutes. Miro feels like a bigger deal each and every time you see him, and his new theme fits perfectly.

GREAT: The camera then cut to Hangman Page storming into the Dark Order’s Hangout, where he began to go nuts at the Dark Order for what they did. However each of them offered Hangman words of encouragement before walking out. The segment ended with Hangman standing on his own thinking.

GOOD: Backstage Taz revealed that the issues with Team Taz would be resolved in two weeks as Brian Cage will defend his FTW Championship against Ricky Starks.

SATISFACTORY: Nyla Rose then teamed up with Vicky Guerrero to take on Britt Baker and Rebel. The match was fairly short and they played it very safe and basic. Vicky looked fine doing the few small things she did, although I still have no idea what the point in this match was.

GOOD: After the match Nyla Rose put Britt Baker through a table

GOOD: The trio of Jake Hager, Santana and Ortiz cut a pre recorded promo on Wardlow and FTR, ahead of their 6 man tag team match next week at Road Rager.

MUST WATCH: In the main event Sammy Guevara took on MJF in what was a fantastic match to end the Daily’s Place era for AEW. The two gave each other absolutely everything they had, and while some of the kick outs might have been slightly over the top, they did it smartly. This match not only once again highlighted the ability of Sammy Guevara, but reminded people about how damn great MJF is between the ropes in a one on one situation. The ending to the match was slightly overbooked for my liking, but Spears costing Sammy the win gives them both something to do as the Jericho and MJF feud builds to All Out.

MUST WATCH: To end the episode a four minute emotional video package aired which showed all of the highlights of their 18 month run in Daily’s Place. Fantastic way to end the era that could have killed the company.

AEW ended the Daily’s Place era with arguably one of the best episodes of Dynamite to date. The show felt slightly shorter than usual, which is undoubtedly a good thing as it often feels overpacked, and every single match did it’s job. Sammy G and MJF killed it in the main event, Miro felt like a huge star, and Omega vs Hangman was built phenomenally. The main negative of the show was the women’s tag match, however they did well to play it safe and ensure Vicky didn’t have to do too much, so realistically even that did its job.