Bray Wyatt Released From WWE Due To Budget Cuts 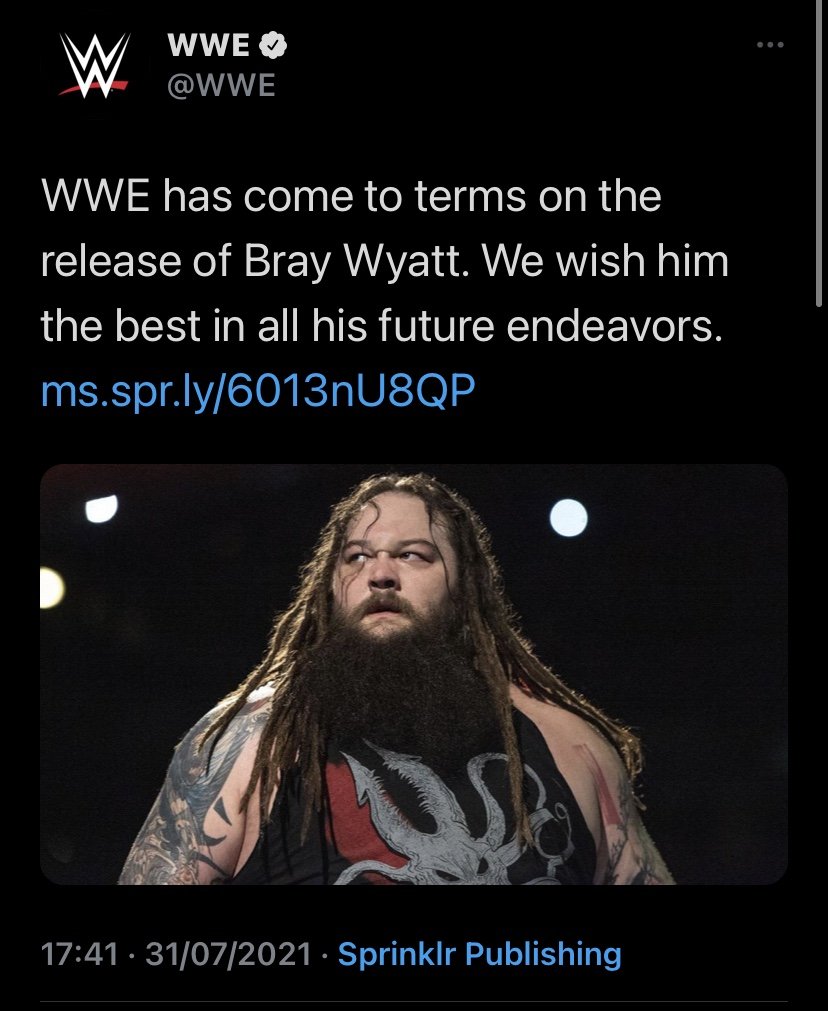 WWE have parted ways with Bray Wyatt as of 31/07/2021. WWE tweeted the news but quickly deleted it, likely due to some sort of error, before tweeting it out again confirming it.

Wyatt has wrestled his entire career in WWE, starting out in FCW before being a part of the second season of NXT in 2010 as Husky Harris. Later becaming part of The Nexus. He was written off TV ironically by Randy Orton in 2011 and vanished.

He’d reappear on the modern version of NXT in 2012 as Bray Wyatt. Along with Luke Harper and Erick Rowan they became known as The Wyatt Family. The three debuted on Raw in July of 2014.

Since then Bray drifted from feud to feud but always seemed to find himself in high profile matches on the card. Having back to back WrestleMania matches with John Cena and The Undertaker respectively.

Bray became WWE Champion at Elimination Chamber 2017, losing the title again ironically to Randy Orton at that years WrestleMania, after which we saw less and less of him.

At SummerSlam 2019, Bray redebuted as The Fiend and quickly became one of the most exciting characters in the company. After some unusual booking Bray became Universal Champion in November, before loving the title to Goldberg in Febuary 2020. Which many people believe began the downfall of The Fiend.

At WrestleMania last year Wyatt beat Cena in the fan beloved Firefly Funhouse match. The funhouse itself also being a fan favourite segment most weeks on Raw, due to how different it was to anything WWE had ever done before.

Wyatt’s last big feud to put a nice bow on things was against Randy Orton. Whom he lost to at WrestleMania in April in a match that ended with a chorus of boos.

Since WrestleMania fans have speculated of the whereabouts of Bray. Eventually it came to light that he was taking time off due to personal reasons, and it was reportedly he had a hard time mourning the death of Brodie Lee who passed away in December.

WrestleMania was Wyatt’s last WWE appearance, though his presence has been felt. In the fall of last year Alexa Bliss became a part of The Fiend character and has been continuing the storyline on Raw in Bray’s absence.

It’s unclear until we hear from the man himself what really happened with Bray and where he went. It’s also unknown what will become of Alexa Bliss and her character, now that all ties of The Fiend aren’t necessarily.

I wonder if Tony Khan is more of a Hurt or Heal type of guy?!

As with any WWE releases, speculation has already started as to where Wyatt will end up next, with many wishing to see a version of The Fiend with AEW creative freedom behind it. If we’ll see it, only time will tell.

EDITORS UPDATE: According to Dave Meltzer, Wyatt was told his release was due to budget cuts. He had been preparing to return in August.