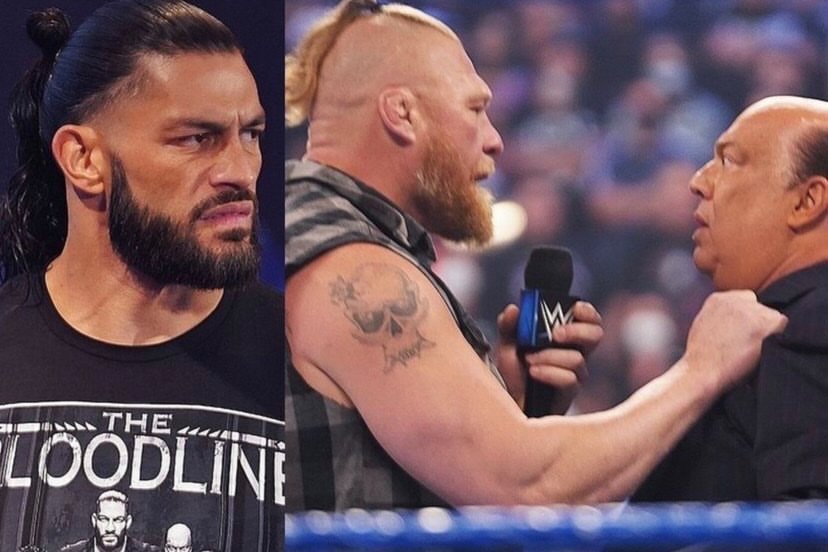 MUST WATCH: The Bloodline come out to start the show & Roman Reigns starts talking about how he & the Usos all run WWE. This went on until Brock Lesnar’s music hit & the crowd went nuts. Heyman asked Lesnar why he has to go after the Universal Championship & Lesnar took the mic & asked Heyman why he didn’t tell Reigns that Lesnar would be at SummerSlam. Reigns then grabbed his title from Heyman & the Bloodline left the ring very upset. Heyman then did the intro that he does with Lesnar where he starts with “My name is Paul Heyman.” Lesnar took the mic after & started smiling & laughing & then got serious & told Heyman to accept his challenge. Lesnar gave him five seconds to answer & he didn’t answer so he picked Heyman up for the F5. Reigns then came out of nowhere to Superman Punch Lesnar & the Usos came to help attack Lesnar as well. However, Lesnar still suplexed both Usos & ended the segment on top. This was a phenomenal segment to open the show.

GREAT: The Mysterios, Shinsuke Nakamura, Rick Boogs & Big E defeated Dirty Dawgs, Apollo Crews, Otis & Sami Zayn after a very, very fun tag team match where the rules were correctly enforced. Zayn brought out Trae Young right before the match & he got thrown out during the match when he tried to cheat to help the heel team win. This was so good.

MUST WATCH: Bianca Belair & Becky Lynch’s contract signing began with Belair when she said that last time she was in the ring with Lynch, Lynch won. She said Lynch would never run from a fight but now it seems like Lynch keeps bringing up 26 seconds because Lynch knows if they go toe to toe, Belair will win. Lynch then came out after that in a large red coat and glasses. Lynch called herself the “original WrestleMania main-eventer.” Lynch said she knew Belair was starstruck at SummerSlam, and she was more of a fan. Lynch then wanted to know what would happen if she didn’t sign the contract. Sonya Deville, Adam Pearce & Bianca Belair all got on Lynch and told her to sign it. The crowd started chanting “Sign it,” & Lynch said she sat at home hearing the crowd chant “we want Becky” & now they are treating her like that, and said that’s wrong. Lynch said she’ll give Belair her match and she signed and threw the contract at Belair, only for Belair to catch it. This was done so well.

GREAT: Paul Heyman cut a quick backstage promo when Kayla Braxton scared him and asked him about Reigns possibly accepting Lesnar’s earlier challenge & he said Reigns will answer at the end of the show. Big E then came out of nowhere to terrorize Heyman, how he has every week since he’s won the money in the bank briefcase. This was so great.

MUST WATCH: Seth Rollins defeated Edge in an absolutely wonderful match that had perfect in ring action, story telling & psychology. Towards the end of the match, Rollins kept superkicking Edge after he was able to turn all the momentum toward him after a low blow. Rollins kept shouting “Why won’t you die!” and it really added to it. This match could’ve used a little more time to have more unique moments, but overall, incredible match.

GREAT: A quick backstage segment where the Usos told Reigns & Heyman that they were going to win their match and retain their titles & after they walked off, Reigns asked Heyman again why he didn’t tell him that Lesnar would be at SummerSlam. Heyman didn’t answer and they went to commercial. The story telling is so fantastic.

GREAT: The camera then cuts to Edge being taken away in an ambulance while Rollins watches. When interviewed, Rollins then reveals he doesn’t know how to feel about this, and begins asking the interviewer how she feels about the situation.

GREAT: The Street Profits defeated the Usos by Disqualification. It looked like the Profits had it won & then Reigns came in and locked a Guillotine in on Ford to choke him out.

MUST WATCH: To end the show, Reigns got on the mic and before he had a chance to say much of anything, Finn Balor’s music hit, but it wasn’t just Balor, it was Demon Finn Balor. The crowd went insane and Balor went into the ring & stared down the Bloodline & then looked at the Universal Championship. This was a great way to end the show.

Overall, this was a near-perfect show from top to bottom. There was not much actual wrestling matches tonight, as there were only three of them, but each one got a great amount of time and all were entertaining, especially the Rollins v Edge match, which had New York going wild. The progression of the Bloodline and Brock Lesnar storyline was fantastic and Finn returning the demon persona felt big. The whole show felt massive and it was nice they did this as a 20 year anniversary for 9/11. They aired a package to start and other packages in between to honor those who lost their lives on that day. This really felt like the show of the year.