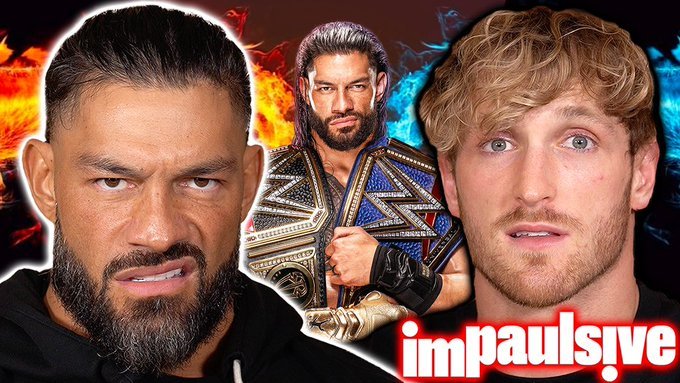 According to some recent reports, WWE is planning to announce Roman Reigns vs Logan Paul will be happening at Crown Jewel.

Logan Paul is undoubtedly one of the most popular personalities in the entire world. Aside from his popularity on social media, Logan Paul made a huge name for himself with his experiences in boxing and his appearances on WWE shows.

After making a special appearance at WrestleMania 37, Logan Paul proceeded to make his in-ring debut at this year’s WrestleMania 38, teaming up with The Miz to defeat The Mysterios. However, Miz turned on him after the match and led to a match between both men at SummerSlam, which Paul won.

Now, after signing with the company and becoming a WWE Superstar a few months ago, Logan Paul might be having another huge match looming on the horizon.

A few days ago, Logan Paul had an interview with Undisputed WWE Universal Champion Roman Reigns at his IMPAULSIVE podcast. During the interview, Paul stated he’s very interested in facing Reigns in the near future.

Even though many fans saw this only as a potential match rumor, a new information has hinted that WWE might be planning to announce that the match will be taking place very soon. Most specifically, at the coming Crown Jewel premium-live-event in The Kingdom of Saudi Arabia.

The Wrestling Observer had informed recently that WWE will make the official announcement on tonight’s edition of SmackDown, since the company announced on social media that Logan Paul will be appearing on tonight’s show to make a huge announcement.

Additionally, WON informs too that WWE will be having a press conference in Las Vegas on Saturday to make the match official.

Even though there is nothing official on this yet, the belief amongst many pro wrestling journalists and sports analysts is that the match would definitely be a huge banger for WWE.

Some even state that this match would be a top selling point for the company. However, it is also important to mention that having Roman Reigns facing Logan Paul would be another important move for WWE in its mission to solidify Reigns as the top star of, not only WWE, but in the entire pro wrestling world itself.

So, it is also important to mention that this match would be the perfect way of adding more momentum into The Tribal Chief ahead of his potential clash with The Rock at next year’s WrestleMania.