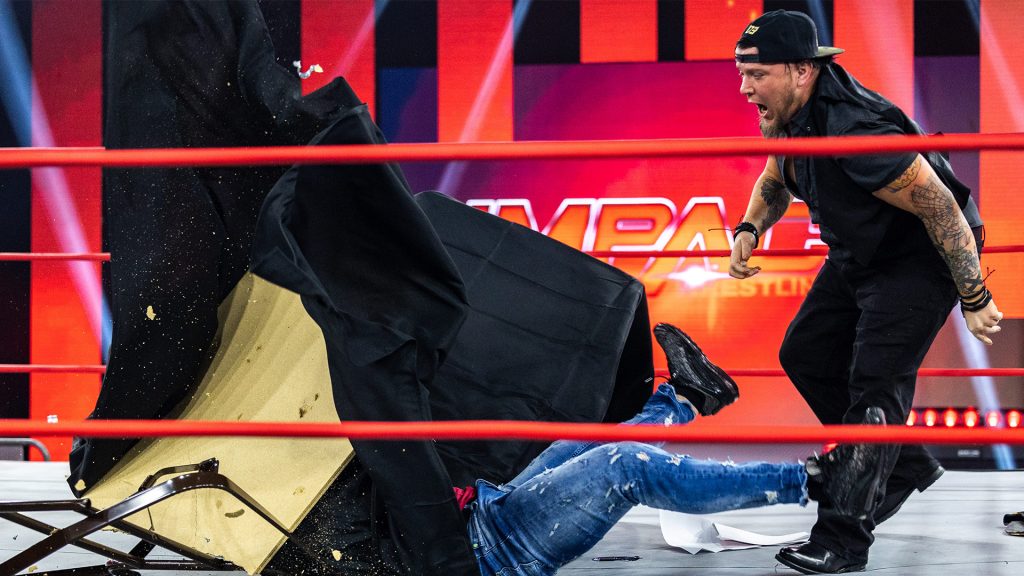 Coming off a really good show last week, Impact has a couple of matches lined up. We got Brian Myers taking in Jake Something, Susan and Kimber Lee vs Havok and Rosemary, and then a contract signing between Kenny Omega and Sami Callihan. With all this and more, let’s get right into the review.

GOOD: We open the show with Brian Myers vs Jake Something. This match was made official last week after Something challenged Myers to a match where if Myers lost, he had to call Jake a professional. Jake Something won this short match after kicking out of an impaler DDT and hitting his signature Black Hole Slam.

GOOD: After the match Brian Myers attempted to leave the ring with Sam Beale. Of course Jake Something stopped him and told Brian to call him a professional. Myers grabbed a mic and started to talk, but it was a set-up. Sam Beale attacked Something from behind and both Beale and Myers began to attack. When it appeared all hope was lost for Jake Something, out came Matt Cardona. Yes that’s right, Matt Cardona is back in the Impact Zone and he’s going back to right where he left off with Brian Myers. After beating down Myers, Cardona hit Beale with a Radio Silence to end the segment.

GOOD: Backstage we see Sami Callihan sitting silent backstage before Gia interrupts him. Sami says therr is nine nights before Omega has to step into the ring with him, before getting arrested for assaulting Don Callis.

AVERAGE: Next up we got Deonna Purrazzo vs. a debuting Lady Frost for the Knockout’s Championship. Now before this match, Purrazzo was boasting backstage that she had beaten all the competition and would be holding an open challenge, hence why Frost got a title match in her debut. But anyways, after a little back and forth, Frost gets some momentum going, only to roll her ankle and over-do a moonsault. This causes Deonna to takeover and submit Lady Frost to a Fujiwa Armbar.

GOOD: After the match, Deonna Purrazzo cut a promo saying that she was the best Knockouts Champion of all time, that she didn’t need to know who her opponent is, and she proved it by beating Lady Frost. Then Gail Kim returns! Kim tells Purrazzo not to get any ideas, that she’s retired, but she’s been talking to Scott D’Amore backstage and now Deonna has a mystery opponent at Slammiversary.

AVERAGE: Backstage we see Chris Sabin go to Swinger’s Palace. It looks dead as barely no one is in there and Johnny Swinger is nowhere to be seen. As Chris starts to get a little comfortable, Moose sneaks attacks him. I really like this rivalry so far, but this short segment just didn’t do it for me.

SATISFACTORY: Next up on Impact was a handicap match. With W. Morrissey on one side, and Manny Smith, Deonte Evans, and Jason Page on the other. This match is what you’d expect. The trio got no offense in while Morrissey was hitting big boots, chokeslams, and huge clotheslines. He ended the match by hitting Page with an F5, before stacking all three men for the 3 count.

GOOD: Backstage we get more development in the Sami Callihan story as Don Callis reveals footage of the attack from the production truck to Scott D’Amore. While you couldn’t see Callihan’s face, you could kinda make out you it was him by his build and tattoos. Sami smacked Don across the face, then the footage ends. Scott tells Don that even if Sami can’t make it to the contract signing, Don and Kenny can.

SATISFACTORY: Then we got Susan and Kimber Lee vs Havok and Rosemary. There isn’t much to say about this match, as it wasn’t very long. But Havok and Rosemary won the match after Susan reversed an attack from Havok, but got speared and pinned by Rosemary.

GOOD: Then it was time for “All About Me” with Tenille Dashwood and Kaleb with a K. The special guest on the show is Jazz. The first thing Jazz says is “Is this Piper’s Pit” (which I thought was great.) This causes Tenille to get annoyed and ask Jazz isn’t Jazz going to ask Tenille about Jordynne Grace and Rachael Ellering. Jazz and Tenille go back and fourth before Jazz goes to leave, and gets attacked. After the commerical break Jordynne Grace and Rachael Ellering challenge Kaleb with a K and Tenille Dashwood to match next week.

GOOD: Rich Swann and Willie Mack come out to challenge the Impact Tag Team Champions, Violent By Design. Instead, they got TJP and Fallah Bahh. They tell Mack and Swann while yes, both teams see eye-to-eye and have a common enemy, that Willie and Rich need to get in line. Then out comes VBD, but before they could even get started, The Good Brothers join the party. They come out preaching (yes, literally preaching) and what not about how they should get a tag title shot. Tommy Dreamer joins the four teams and tells them that Scott D’Amore has made a 4 way at Slammiversary for the belts and that Karl Anderson, Rich Swann, TJP, and Deaner would have a match.

GREAT: Fatal 4 Way time as the previously mentioned four men go at it. TJP and Deaner begin fighting it out on the outside, while Anderson and Swann go at it in the ring. Then TJP and Swann start trading blows before Deaner attacks Swann from behind. Then, at one point before the commerical break, Swann hits a swanton onto everyone on the outside. After some more really good action, Karl Anderson won after hitting a Stun Gun on Deaner.

GOOD: Backstage we see Susan and Kimber Lee outside someone’s locker room. Susan, upset about her and Lee’s lost is told not worry, that Kimber Lee has a back-up plan. What’s that plan exactly? Father James Mitchell. We haven’t seen Mitchell in over a year after he was killed(?) off by Havok and Su Yung. He tells Lee it’ll take some time, but he’ll help Susan.

GREAT: Then to end the show we got a contract signing between Kenny Omega and Sami Callihan. Omega and Callis came out first. Callihan, of course, was arrested earlier that night so Scott D’Amore came out for him. Kenny signed the contract as D’Amore assured him everything Omega asked for was included. Then a couple of minutes into the signing the lights started to glitch out. It happened a second time, and a security camera video played on the tron. It was a different angle from Callihan’s attack on Callis earlier and it showed that in fact a hoax. Don Callis had paid off John E. Bravo to pretend to be Callihan and fake attack Callis. The lights went off once more, and Sami Callihan was in the ring when they came back on. Kenny got the upper hand on Callihan before receiving a low blow and a package piledriver. Then Callihan signed the contract and powerbombed Omega through the table, ending the show.

This was an okay episode of Impact. With three returns and a fatal four way tag match set up for Slammiversary it really gets me excited for next week. But othee than the fatal four match, the aforementioned three returns, and the contract signing this week was pretty forgettable. However I won’t be too hard on Impact because they have been pretty enjoyable overall the past couple of weeks so let’s hope they can pick the steam back up next week.