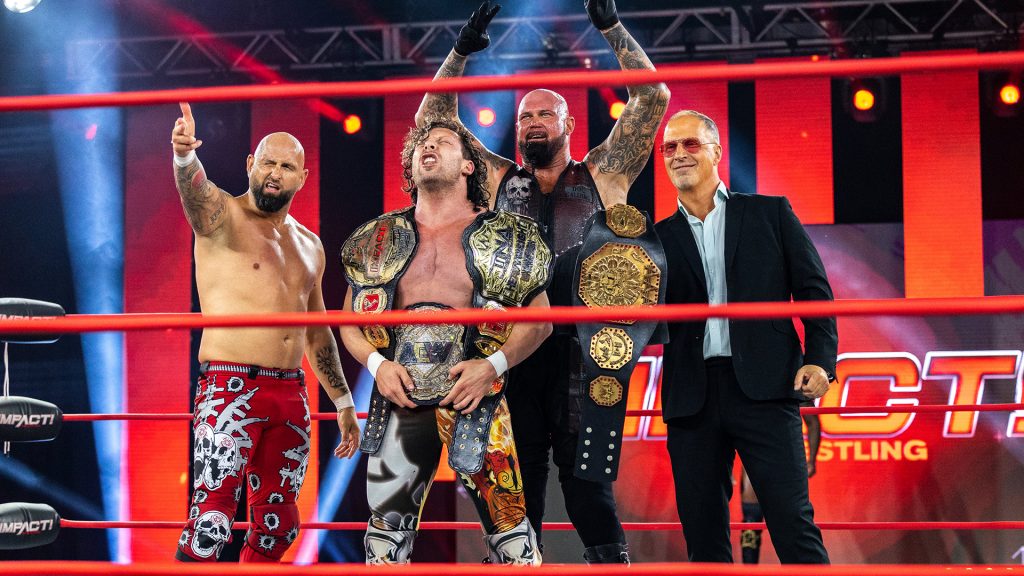 This week on Impact was lined up to be a good one. Allies Eddie Edwards and Kojima square off, the X Division scene continues to heat up as Chris Bey takes on Petey Williams, and AEW/TNA/AAA Mega Champion Kenny Omega along side the good brothers are in action tonight. So enough talk, let’s get right into the show.

GOOD: To open up the show we went straight into Eddie Edwards vs Kojima, or so we thought. The New Japan legend made his way to the ring first and waited for Edwards, but Edwards never showed up. Instead W. Morrissey (AKA Big Cass for anyone who doesn’t know) appeared on the titantron and revealed that he had attacked Eddie Edwards in the parking lot. While Kojima stood in the ring confused, Brian Myers and his protege Sam Beale came out to confront Kojima. The heels attacked Kojima prompting Jake Something to come out and make the save. A referee came out and made this match official.

GOOD: So now it’s time for the true opening match, Kojima and Jake Something vs. Brian Myers and Sam Beale. Something started off the match really strong before being overpowered by the heels, who were keeping him away from Kojima and refusing to let Jake tag out. When he eventually did tag out, Kojima gave it all he had against both Myers and Beale to put them down for the 3 count.

Result: Kojima and Jake Something defeats Brian Myers and Sam Beale via pinfall

SATISFACTORY: Next up we got Rachael Ellering, who had Jazz in her corner, going against Tenille Dashwood, who has Kaleb with a K her corner. Overall the match was pretty good, nothing too memorable other than the fact that despite not being seen in a minute, Tenille looked great in the ring. Rachael won the match via roll up despite the facts that Tenille took control for the majority and Kaleb with a K attempted to distract Ellering.

GOOD:After the match Dashwood began to attack Ellering as Kaleb encouraged her. Jazz and Rachael Ellering’s former tag team partner, Jordynne Grace made the save, seemingly reuniting with Ellering.

GOOD: Up next we had more tag team action as Fallah Bahh and TJP took on Rich Swann and Willy Mack. This was a fun match, though it was almost over as soon as it started. Not too long into the match, all four members of Violent by Design came and laid out all four men, possibly setting up a triple threat tag team match at Slammiversary in 17 days. (Josh Matthews won’t let you forget that.) Now I really liked what they had going on in the this match and I really wish it didn’t end the way it did, but I understand why and I’m fine with it.

GREAT: Then it was time for the best match of the night, as Chris Bey went up against Petey Williams. The story behind this match up is that Ultimate X is returning at Slammiversary and the heels and faces involved in the match have formed their own alliances with Bey being stuck in the middle. Bey took control early on, but Petey fought back, almost hitting a Canadian Destroyer that was reversed by Bey into some kind of TKO inverted neckbreaker. (I don’t know the proper name, but it looked cool) That wasn’t enough to put away the veteran as he went for another Canadian Destroyer. Bey, however, reversed it again, this time hitting Williams with The Art of Finesse to win the bout.

SATISFACTORY: In the semi-main event we got Steve Maclin vs Manny Smith. There isn’t much to say about this one as the former Forgotten Son was in control the entire time, before ultimately pinning Smith to win the match in lest than 5 minutes.

GOOD: In the main event we had a 3-on-3 tag team match between Kenny Omega & The Good Brothers with Don Callis and Moose, Sami Callihan, & Chris Sabin with Tommy Dreamer. Kenny and The Good Brothers basically controlled this match. The heels isolated Sabin early on, only for him to tag in Callihan, who got low blowed and tagged Sabin back in and he started to get a little bit of offense in. During the the entire match, Moose was refusing to let Sabin tag him in. Moose injured Sabin’s partner, James Storm, so there was a lot of tension building up between Moose and Sabin during the whole match. It got so bad to the point where Moose speared Sabin and left Omega and the Good Brother to pick the bones of his partners as he walked out of the match. After Moose walked out, Kenny hit Sami with a V-Trigger and The Good Brothers hit Sabin with a Magic Killer to win the match and close out the show.

Impact was pretty good this week. Nothing too terrible, but nothing mind blowing. I’m a little upset we didn’t get Edwards vs Kojima, as I felt like that would’ve been an amazing match. Chris Bey and Petey Williams knocked it out of the park and that just makes me even more excited for the Ultimate X match at Slammiversary. The only thing I would change about this week is the lack of Knockouts. Yes we got Rachael vs Tenille, but what about Deonna Purrazzo? Anyways as I previously stated, this week was really good and I can’t wait to see what happens next.