Honestly: New Day Is NOT The Greatest Tag Team Ever 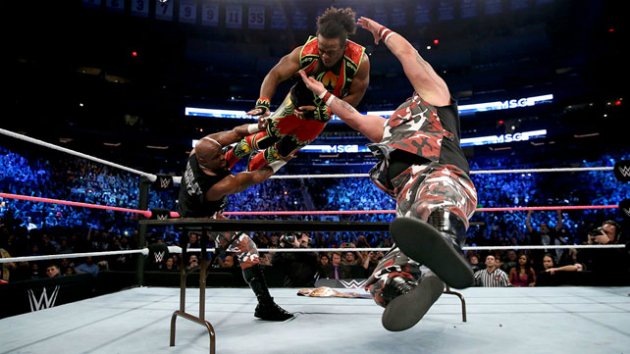 Earlier this week WWE made a list of the top 50 tag teams in history. Surprisingly to some, and not-so surprisingly to others, WWE crowned New Day number one. Allow me to dive in to arguments as to why they may deserve the spot, as well as rebuttal why I feel they don’t.

When I say that New Day shouldn’t be number one, it isn’t slander. The New Day have been absolutely fantastic and deserve every one of their flowers. They truly are one of the greatest of all time. I just don’t think they are the ABSOLUTE greatest.

When it comes to WWE created lists, you can be sure that it only applies to WWE, and WWE ONLY. If you are a tag team with a reputation around the world, and around different promotions… none of that counts when you get to WWE (in their eyes).

Combine that with ELEVEN tag title reigns, and major entertainment success, and you’ve got the reason why New Day was awarded number one.

To win 11 championships is a jaw-dropper in it self. They have the most amount of title reigns for a tag team in WWE history. What makes it even more special, is that they are still an active tag team. WWE history is normally based on past, but to be active and have these accomplishments gives WWE bragging rights. They can push any narrative about New Day being the greatest, and continuing to evolve, and reach new greatness. I assess that this is a part of the reason why they were named number one.

The New Day also brought new life to tag team wrestling, with the re-introduction of “The Freebird Rule.” After tag team wrestling was revolutionized in the early 2000’s, it appeared to remain that way, and even undergo a decline until the New Day came around. Being able to flip-flop back and fourth through members, to defend championships, although done before decades back, was innovative to this period of time.

All of these attributes, plus many many more, is certainly enough to land New Day a spot as the greatest tag team of all time. However, I just don’t think they are THE absolute greatest.

When I think about the greatest tag team of all time, two teams immediately come to my mind. The Dudley Boyz & The Hardy Boyz.

Starting with The Hardy Boyz, Matt and Jeff introduced a style to WWE that has yet to NOT be emulated. Talk about innovators? The daredevil, high risk style of the Hardy’s would become one of the most inspiring things in modern WWE. You look at AJ Styles, Seth Rollins, Ricochet, even New Day member Kofi Kingston, and countless of others, and you probably think these guys are amazing high fliers… these guys are doing some crazy things. Well believe it or not, if the Hardy Boyz aren’t SOLEY responsible of this renaissance, they certainly have a huge chunk of credit.

The Dudley Boyz were apart of the wrestling revolution known as ECW. It was over there that they mastered the art of drawing “heat.” The Dudley’s have to be arguably the most polarizing figures of that time. Already multiple time champions in their own right, they then came to WWE and introduced their ‘extreme’ style. They would win WWF/E tag team gold 8 times. Combining their WWE reigns with their ECW, WCW, TNA, and NJPW reigns, make the Dudley’s the team with the most accolades ever.

In my opinion The Hardy’s and The Dudley’s contributed more to professional wrestling. I personally would put the Dudley Boyz at the very top of the list of best tag teams, but the Hardy’s can also belong there. What makes this conversation so interesting is that even though I personally don’t agree with New Day being number one, THEY TOO have a case for being the greatest, as seen by WWE’s coronation of them on the list.