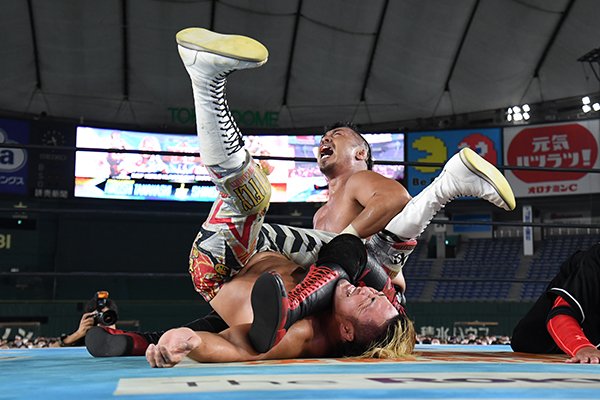 Sunday, 2021, July 25. We saw NJPW have its Wrestle Grand Slam show. An amazing show with an emotional war at the end. But there was another heartful war happening in japan, the 2020 Olympics. Since they have no crowd and a current state of emergency in Tokyo. Not a lot of events were happening or had a small crowd. But the Tokyo Dome. Fans came rushing in to see 2 warriors going at it all. Big bumps, high-flying moves, emotional fights. New Japan was the best-selling ticket in town.

NJPW’s Wrestle Grand Slam was first scheduled on May 15 but postponed to July 25 due to 9 wrestlers getting infected with COVID 19 including Kazuchika Okada and El Desperado. Another WGS date was at Yokohama Stadium but it got cancelled. New dates were announced for WGS after a week after the incident. The Yokohama Stadium show was replaced with a WGS 2 day show at the MetLife Dome in Saitama. The Tokyo Dome show has just occurred last week. Over 5000 masked fans went to the Tokyo Dome to watch Pro Wrestling. Since the Olympics are happening without a crowd. New Japan was the best ticket in Tokyo.

As you may know. Tokyo is currently in a state of emergency which limited live events to having a certain amount of people in the crowd. Since NJPW does not want to be in big big trouble, they had 5000 fans come in the 55,000 seated Tokyo Dome. Due to the State of Emergency, The Japanese Government declared that the Olympics will have no crowd due to Covid cases rising up in Japan as it hit a record breaking number of 3000 just yesterday as I am writing this. This does not only affect the fans who were so excited to see the battle of warriors. This affected the athletes as well.

Famous Japanese sports journalist Tasuku Osawa said “Its very, very disappointing to see such an empty stadium”. During the match in the 63,700 seated Saitama Stadium, Japan’s phenomenal soccer player, Takefusa Kubo scored a goal against Mexico. Silence. Only the voices of some enthusiastic journalists but it was not enough. Osawa “I remembered the 2002 World Cup when there where people in the stands standing up and cheering at the top of their lungs. Everybody was standing, dancing, singing. It was a hugely emotional day, a day I cannot forget for life of today’s young Japanese, its a shame they won’t get to experience it.”

For every sport we need a crowd, for Pro Wrestling, it is the most important part. So I have went to the Gee Store in Osaka where there is a Tokon Shop corner and interviewed some NJPW fans.

Fans of all ages came in, kids, teens, elderly, women, all ages. “It feels like I can feel their energy when they fight” Furukawa Sakami, 73. She has been watching since the Inoki days and her son, Akiho takes her to shows still to this day!

Another Elderly by the name of Yamanashi Senda stated that “I love it because it’s different, Its not Judo or Taekwondo. Its Pro Wrestling” She still loves pro wrestling and is a sponsor for some wrestlers.

For Pro Wrestling, even kids can enjoy it! One boy named Daisuke said that “pro wrestling looks cool, the moonsaults, deadly moves, I love it!” I also asked all the people I interviewed who their favorite wrestler is and for kids, Okada and Tanahashi are the best for kids! Another kid named Shin said that “I like the wrestlers! I love Okada, Tanahashi, Ibushi. I hate Bullet Club and Great Okan(slang for mother)!”

プ女子(Pujoshi) Joshi does not mean female wrestlers; Joshi means female. The name pujoshi means female puro fan. The name joshi was added to female puro in japan today because its an all women roster. Some Pujoshis I met were very sweet. “I love how they look and their moves. It gives me goosebumps when Tanahashi goes up the ropes because we think, is he gonna miss?! I love that feeling and no other thing can give me a chill like that” said Akane, 24. For female favorites, most of then said Kota Ibushi and Sho. They said that they look so cool and cute. “Pro wrestling is like a thing where you can relieve all your stress. You can say, Hey! Lets go watch Pro Wrestling! Its so fun to watch” said 32 year old Tomoko.

Some other people that I interviewed said “The sound of the chops, the rails, the bumps that makes me feel so hyped. Thats something you cant get while watching it live on TV but you can when you go to a show.” Said Ryota, 37. “I just came back from Tokyo to watch WGS. It was such a shame to not be able to cheer. The live experience is such a good feeling, I WILL go to more shows like the G1!” Said the Ikeda family. These show the loyalty and support of a Japanese Puro fan!

This was amazing getting to meet other puro fans! Will do again!