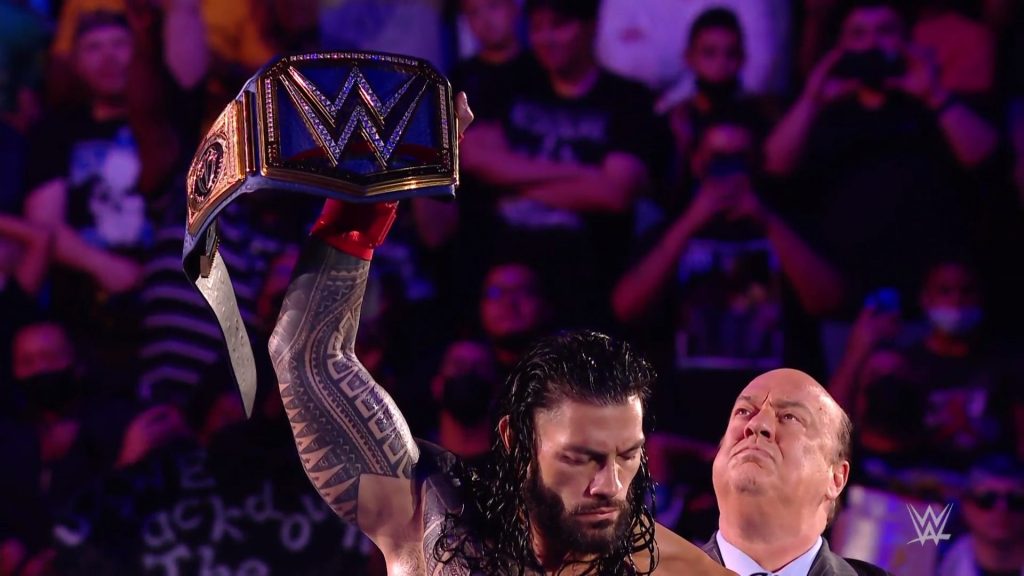 Last week’s episode of Smackdown, while not bad, was definitely the weakest episode in a while. A solid first half hour was plagued by a very hit or miss duration. There were some highlights like Bianca’s homecoming being fun and Seth’s promo being great, but a lot of the actual matches were very subpar or average at best. With Extreme Rules being this Sunday, can Smackdown bounce back for their go home show? Let’s find out!

GREAT: The show kicks off with the Smackdown Women’s champion Becky Lynch. Becky is upset that Bianca was given a party last week for essentially no reason but no one gave her any fanfare for everything she’s accomplished over the past year. She goes on to say that she didn’t want to ruin Bianca’s homecoming last week, but felt she had to because Bianca hit her first. Bianca Belair interrupts and says that while she was embarrassed at Summerslam and last week, it won’t happen at Extreme Rules. Bianca has a great line where she says that even though they both won the rumble and main evented Wrestlemania, Bianca did it in significantly less time. Belair finishes by saying that Becky is still stuck on the 26 second win at Summerslam and says that won’t happen at Extreme Rules. Bianca extends her hand to Becky, but Becky slaps her instead. Bianca proceeds to beat up Becky, but Lynch gains the upper hand. She goes for the Manhandle Slam, but Bianca reverses into the KOD and stands tall ahead of Sunday. This was a solid opening segment to open the show with. Both women looked great here and this was a good progression to their feud. Looking forward to Sunday.

GREAT: Our first match of the evening is for the Intercontinental championship as King Nakamura defends against Apollo Crews. Crews has a quick backstage promo where he says that it’s been months since he lost his IC title, but tonight he’s going to redeem himself and bring prestige back to himself, his people and the title after he wins it back from Nakamura. The match starts off fast paced with Nakamura delivering a quick flurry of offense. He goes for a running knee in the corner, but Apollo moves out of the way. Apollo proceeds to press Nakamura over his head and just TOSS him out of the ring. A wicked spot very early in the match. Apollo gains control but Boogs wills Shinsuke on with his guitar playing, allowing him to form a comeback. Nakamura goes for his top rope knee, but is caught with a beautiful midair drop kick from Apollo. Nakamura goes for the Kinshasa, but Apollo is pulled out of the ring by Commander Azeez, but Nakamura tries attacking him to no avail. Boogs, however, delivers a VERY impressive overhead suplex to Azeez. Boogs is so damn good. Shinsuke reverses an armbar into a pin for the win and retains the title in a great match.

GOOD: Montez Ford is interviewed backstage. Kayla Braxton asks him if the Usos will be as dominant Sunday as they were on Raw. Montez says that it doesn’t matter what emotions they feel, the Street Profits are going to win the tag team titles back at Extreme Rules. He says that Angelo Dawkins isn’t here tonight because he’s at a wedding and says that the Usos are nothing more than Roman’s bloodline bitches. This was a good promo from Montez.

GOOD: Roman Reigns is backstage with Paul Heyman. He’s disgusted at Ford’s comments about the Usos and demands a match with Montez tonight. Paul tries talking Roman out of the match because of his match Sunday against the Demon, but Roman insists. I loved Roman’s subtle anger in this segment, showing a sliver of genuine love for his cousins.

AVERAGE: Sonya Deville and Adam Pearce are backstage when they’re interrupted by Heyman. They make fun of Heyman, continuing to insist he’s aligned with Brock. Heyman asks them to book the match between Roman and Montez, to which they agree. Heyman interestingly finishes by saying that after the match, they’ll discuss the draft. I wonder what that is going to entail exactly.

GREAT: Seth Rollins is backstage and says that he’s being patient with Edge, but is upset that he hasn’t heard a response to his challenge last week. However, Seth says that Edge’s silence is deafening and that Edge is too hurt to respond. Rollins goes as far to say that he potentially ended Edge’s career. Seth says that he’s now grown impatient and that next week he demands an answer to his challenge. If Edge doesn’t show up, he says that he’s going to find him and beat the answer out of him in front of his wife and children. What a great, chilling promo from Seth here. I adore this feud and Rollins has improved by leaps and bounds this year. Great stuff here.

AVERAGE: Up next is Zelina Vega vs Liv Morgan. Carmella joins Cole and Pat on commentary, but just talks about how beautiful she is. The match is decent for the most part. Liv does the double knees to Vega into the turnbuckle, which prompts Carmella to go check on her and distract Liv. Liv tries attacking Carmella, but Zelina hits Morgan with a boot followed by a sunset flip into a pin for the win. A short, decent match but it’s nice to see Zelina get a win for once.

GOOD: Up next is the debut of Happy Corbin’s newest talk show, Happy Talk. Corbin says that his talk show is about promoting happiness and positivity. He introduces his first ever guest….himself. His rationale is that he is the happiest person in the world and that he’s the happiest possible guest he could get. Corbin plays footage from last week where he beats up Kevin Owens and revels in his actions, saying it brings him joy and happiness. Kevin Owens interrupts, but is attacked by a returning Riddick Moss! The two proceed to beat up Owens, going as far as to slam him on the steel steps. This was a good segment and it’s nice to see Riddick Moss back.

AVERAGE: Montez Ford is interviewed backstage once again and is asked if he regrets his comments about the Usos from earlier. He says that he doesn’t and says that he’s not afraid to get into the ring with Roman. Tonight he wants the smoke.

SATISFACTORY: Up next is Nikki A.S.H. vs Natalya. I got really confused for a second wondering why Nikki and Rhea were on SmackDown, but I forgot that the tag champions are allowed to go across both brands. This was an ok match but was way too short. Nikki rolls up Natalya for the quick win.

AVERAGE: Post match, Shotzi Blackheart and Tegan Nox come out and fire a missile at the tag champions. It seems that WWE finally remembered Tegan and Shotzi and they’ll finally get their title shot.

GOOD: Dominik Mysterio is backstage with his dad. Rey says that he’s going to help Dominik from now on, but Dominik says that Rey is smothering him and won’t let him do things on his own. He says that he would have beaten Sami the past two weeks if it wasn’t for Rey butting in. Rey leaves and tells Dominik to clear his head. Sami Zayn shows up and puts over Dominik, saying that every time they’ve been in the ring together Dominik has improved and that Dominik has the tools to be a great WWE superstar one day. However, he says in order to do this, he should start listening to his dad less and listen to himself more often. I really liked this. I’m game for Sami manipulating Dominik into potentially turning on his father.

GREAT: Up next Naomi appears to finally be making her in-ring return to Smackdown. She gets on the mic and says that she wants to wrestle, but Sonya keeps disrespecting her and refusing her request. She says that she’s fed up and wants to face somebody tonight and issues an open challenge. Sonya, however, comes out and says that Naomi will not be competing tonight. Sonya says that she makes the matches, but Naomi challenges Sonya to a match. Sonya denies her request and says that she no longer competes. Naomi says that Deville sucks at her job and keeps asking for the match. Sonya cuts her mic audio and calls for security to remove her from the premises. Sonya berates Naomi as she leaves, saying that Naomi has failed every chance WWE has given her and tells her to “TikTok her way back into obscurity.” I’m REALLY looking forward to this eventual match. It needs to happen.

AVERAGE: Backstage, Roman and the Usos walk to the ring, but are confronted by Alpha Academy. I like WWE setting up some potential feuds post Extreme Rules.

AVERAGE: Becky Lynch is backstage and talks about how Bianca embarrassed her earlier tonight and says that at Extreme Rules, she’s not only going to beat her but she’s going to break her. A decent, short promo from Becky but I’d like them to add a stipulation of some kind.

MUST WATCH: Up next we have our main event as Montez Ford takes on the Universal champion Roman Reigns. The match starts off with Montez gaining a brief advantage over Reigns, but Roman quickly gains control and dismantles Ford for the duration of the match. Montez eventually is able to get an upper hand, throwing Roman into the barricade several times. He also throws Reigns into the announce table and steps on top of it, causing it to collapse. Reigns, however, gained control again with a vicious clothesline and a brutal pop up slam. Ford’s selling in this match is wonderful. Montez gets a very close two count on Roman. I love Montez in this match. This is a potential star making performance for the man. Ford goes for From the Heavens, but Roman gets the knees up. Roman quickly locks in the guillotine, to which Ford taps. This was a fantastic main event. Ford really held his own against the Universal champion and looked great, even in defeat.

MUST WATCH: Post match, Paul Heyman says that Montez has not paid enough for his sins against the Bloodline. He wants Roman to make an example out of Ford to send a message to the Demon ahead of Extreme Rules. The Usos come out and pull out several steel chairs. Roman proceeds to beat down Ford with a chair as The Usos set up a table on the outside. Roman hits a vicious uranage on Ford through the table. However, the lights go out and the Demon arrives!!! Finn Balor is posed on the top rope and takes out the Bloodline with a dive. He pulls out a kendo stick and beats down the Usos. Roman goes to hit Balor with a chair, but is hit with a sling blade. He beats down Roman with a chair and dives on Roman on the outside. The Demon stands tall to end the show in a fantastic segment.

Going into this show, I wasn’t expecting a lot based on what they announced. Boy did this show prove me wrong and exceed my expectations. This was a very fun episode of Smackdown. A great opening segment with Becky and Bianca, a fantastic main event with Roman and Montez and the Demon beating down the Bloodline were all highlights of the show. Even the segment with Naomi and Sonya has turned their feud into a sleeper hit. A solid go home show for Extreme Rules.