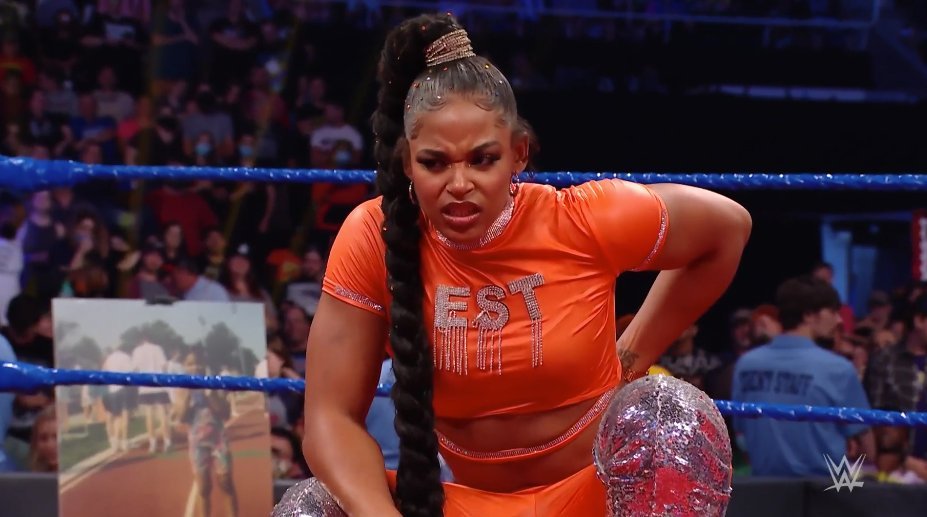 Last week WWE returned to the world’s most famous arena Madison Square Garden and delivered, arguably, the best Smackdown of the year. A fantastic opening segment with Brock and Roman, a great match with Edge and Seth Rollins and the return of the demon Finn Balor made for an electric Friday Night. With Extreme Rules being almost one week away, can Smackdown keep this momentum going? Let’s find out!

GREAT: The show kicks off with the Bloodline. Paul Heyman puts over Roman Reigns as a man who will not back down from any challenge as Universal champion and has shown that day in and day out. Heyman has a great line too where he says that Roman acknowledges no demons and questions why Finn has to tap into his inner demons to beat Roman. Paul talks about Brock Lesnar and says that while Brock is great, he’s nothing compared to Roman Reigns. However, the Bloodline is soon interrupted by the NEW WWE champion Big E! Before he has a chance to say anything, though, Finn Balor comes out too. This was a really good segment to kick off the show. It’s nice to see Big E show up on Smackdown, most likely via the wild card rule. I loved the tease with Big E and Roman for a potential match at Survivor Series as well. My only complaint is that the segment ended rather abruptly.

GREAT: Coming back from the break we have an impromptu tag team match as Finn Balor teams up with Big E to take on the Usos. Big E hits a wicked splash on Jey Uso on the apron, but the Usos eventually take control and begin isolating the WWE champion. Finn eventually makes the blind tag and comes in with a house of fire. Jey Uso also makes a blind tag and trips up Finn and pulls him to the outside. Big E eventually makes the hot tag and runs down the Usos. E goes for his patented spear through the ropes but is stopped by Jimmy who hits a massive superkick. Finn Balor eventually comes in to make the save. The two hit a beautiful double team finisher combo where E hits the Big Ending in unison with Balor’s Coup De Grace. A great opening match here.

GOOD: Backstage, Roman is with Heyman and asks Heyman if there’s anything he wants to tell him. Heyman sheepishly says no, but Roman insists that Heyman know something. Paul continues to insist that he had no knowledge of Brock’s return at Summerslam and says that Brock fears Roman. He says Brock fears Roman and created this false narrative to turn him against the tribal chief. Roman asks Heyman if Brock will be at Extreme Rules, to which Heyman says no. Roman, however, doesn’t believe him. Heyman says that he isn’t 100% sure Lesnar won’t show up, but says that he would be stupid to. Roman finishes by saying he doesn’t pay Paul to give him hunches, he wants results.

AVERAGE: Up next is Robert Roode vs Rick Boogs. This was an alright match. The finish sees Roode go for the Glorious DDT, but Boogs reverses into a Samoan drop. Boogs hits a series of suplexes into the Boogs Cruise to pick up the victory.

AVERAGE: Post match, Boogs and Nakamura celebrate with McAfee but are jumped by Apollo Crews and Commander Azeez. Azeez beats up Shinsuke and Boogs as Apollo gets on the mic and berates the king. He finishes by saying he wants his rematch for the Intercontinental championship. A decently good segment but it’s good to see Shinsuke doing something of substance again as IC champion.

AVERAGE: Kevin Owens has a backstage segment where he says he’s sick of Happy Corbin. He says he’s furious about what happened a few weeks on the KO show when he and Logan Paul attacked him. Owens finishes by saying he’s gonna use that anger and take it out on Corbin tonight. A decently good segment.

AVERAGE: Up next is Kevin Owens taking on Happy Corbin. Before the match, Corbin attacks Owens and chokeslams him into the LED apron. The match never officially happens but this beat down was alright. I still really like Happy Corbin and this Owens feud isn’t bad.

GOOD: Paul Heyman is backstage when he’s interrupted by Kayla Braxton. Kayla says that she has sources about the whereabouts of Brock Lesnar but Heyman continues denying any involvement with Lesnar and tells her to leave him alone. He immediately runs into Big E and congratulates him on becoming WWE champion and defeating a champion that he could actually beat. Big E, however, says that at Survivor Series he will face Heyman’s boy, whether it be Roman or Brock. He turns around and gets hit with a surprise superkick and gets beaten down by the Usos. This was a fun segment that should definitely lead to The New Day vs The Bloodline.

GREAT: Seth Rollins is in the ring and discusses his actions last week against Edge. He says that people should check on Big E after his beat down and ties it to the beatdown Edge got last week. He has a great line where he says that after being stomped, Edge was nothing more than a lifeless cockroach on the bottom of his boot. Seth says that the crowd should have expected his actions last week. He had one of the biggest victories of his career, but never had a chance to celebrate it. Everyone kept calling him a monster, although he simply used a move in a match and won. He blames the fans for what happened to Edge because they goaded Edge into berating Rollins. Rollins says that he’s not done with Edge and says that he had fear in his eyes. Because of this, Seth actually felt sorry for him and says that it’s eating away at him. To get rid of that feeling, Seth says he has to finish Edge. This promo was incredible. I adore this entire Edge and Rollins feud and Rollins being so emotionally conflicted about the whole thing is fantastic. I’m really excited to see where they go potentially heading into Extreme Rules.

GOOD: Kayla Braxton is backstage with the Smackdown Women’s champion Becky Lynch. Becky says that Bianca had all the momentum in the world before running into a roadblock, that being Becky herself. She finishes by saying she’s never been to a homecoming before, alluding to potential plans for later.

POOR: Up next is a tag team match as Liv Morgan and Toni Storm take on Zelina Vega and Carmella. Liv drives Carmella’s face into the turnbuckle, to which Carmella immediately begins clutching her nose, saying it’s broken. Camella gets counted out to end the match rather abruptly. This was an absolutely nothing match and this was a slap in the face to four women that deserve so much more than they’re given.

AVERAGE: Post match, Liv gets on the mic and doesn’t feel bad for breaking Carmella’s nose and says that this feud needs to end. She challenges Carmella to a match at Extreme Rules to end the segment. This was alright but Liv doesn’t have the best delivery on the mic.

GOOD: The Street Profits are backstage as they put over Bianca’s homecoming celebration later tonight. They switch gears to talk about The Usos and are pissed at them for jumping Big E earlier tonight. They finish by saying that they’re going to take the tag titles from the Usos at Extreme Rules.

SATISFACTORY: Carmella and company are backstage in the trainer’s room. Carmella is upset at Liv for busting her nose and accepts her challenge at Extreme Rules.

GOOD: Finn Balor is backstage and talks about how he wasn’t born into a wrestling family or a prestigious bloodline. Rather, he was born into a family of railroad workers, but chose professional wrestling all the same. He says that the demon is a manifestation of the negativity he’s faced within his life from people who said that he wouldn’t make it. He says that tonight Roman looks into the face of Finn Balor, the challenger. But at Extreme Rules he looks into the face of the demon, the universal champion. The segment ends with a dissolve effect as Finn changes into the demon. This was a good segment to remind people of the existence of the demon as well as put it over as a big deal.

AVERAGE: Sonya Deville is backstage and is interrupted by Naomi, once again, asking about when her debut is going to be. Sonya, once again, says to talk to her next week, but this time Naomi is having none of it. She says that she is a two time women’s champion and that she’s accomplished more than Sonya has done in her entire career. She backs Sonya into a wall and says that one way or another she will get her match. I’m happy there was more progression to this storyline finally and I’m hoping the payoff is Sonya vs Naomi.

GOOD: Up next is Sami Zayn vs Dominik Mysterio. The match starts off a bit slow but Dominik hits a very nice splash to the outside to get the match moving. Dominik builds momentum and hits the 619. The crowd is firmly behind him to win the match, but he takes too long to go to the top rope and hit the splash. As a result, Zayn gets the knees up and rolls up Dominik for another win. This was another good match between the two but I’m tired of seeing this match for, what, the third time? Do something different please.

GREAT: Finally we have Bianca Belair’s homecoming celebration. To kick it off we have the mayor of Knox County himself Kane!!! Kane introduces Bianca who gets a warm reception from the crowd. Bianca says that Knoxville turned her into the EST and says that her father taught her an important lesson. If someone starts something, make sure you finish it. Belair says Becky did knock her down at Summerslam but she knows how to get back up and will take back the Smackdown Women’s championship. Kane says that when she wins the title there will be a big celebration once again and presents Bianca with the key to the county. Bianca leads the crowd in a local chant before Becky comes out to ruin the fun. She says that Bianca isn’t going to win at Extreme Rules and will be stuck as nothing more than Knoxville’s champion, not the women’s champion. She also says that she’s not out here to steal Bianca’s thunder and says that even though Extreme Rules will be her night, tonight is Bianca’s night. She extends her hand to Belair in solidarity, to which Bianca reluctantly agrees. Becky tries leaving but Bianca maintains her grip. Becky goes for a punch but is reversed by Bianca who gets her up for the KOD. Lynch, however, is able to reverse it into the Manhandle Slam and lays out Bianca to end the show.

While not a bad show by any means, this was definitely one of the weaker episodes of Smackdown recently. The first half hour was great with the opening segment and the opening tag match. The Seth Rollins promo and Bianca’s Homecoming Celebration were great too. However, everything else on the show was hit or miss. The Roman segments were fun and Sami vs Dominik, while very repetitive, was still a good match. The women’s match was highly disappointing and a complete waste of the talents of four women.