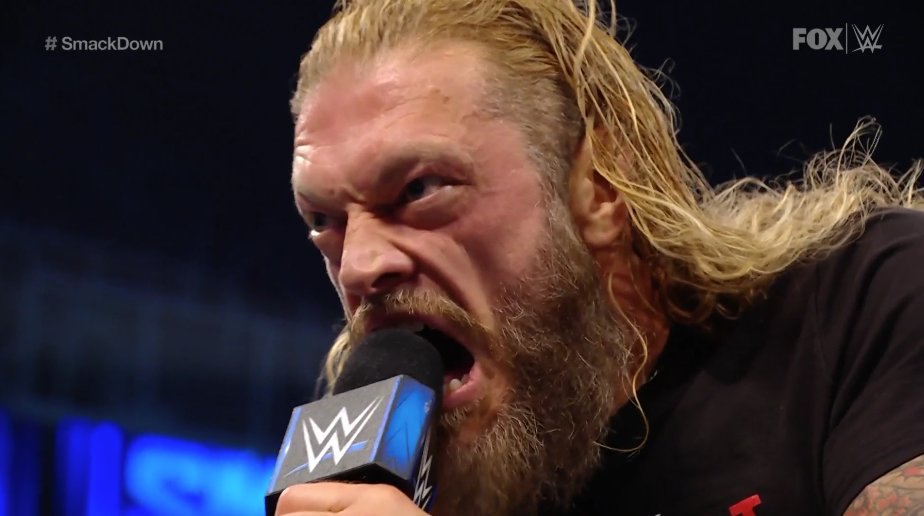 Last week, WWE had their annual draft. Rosters will be shaken up, but not quite yet. These changes don’t materialize until after Crown Jewel. Until then, we are treated to two highly anticipated tournaments. Tonight marks the beginning of the prestigious King of the Ring tournament as well as the first ever Queen’s Crown tournament. Which superstars will advance? Which superstars will etch their names in history? Let’s find out!

GREAT: The show kicks off with the contract signing for the Smackdown Women’s championship match at Crown Jewel. The three have a fun back and forth until Sasha attacks Bianca from behind once again. Becky jumps the ring and the three begin to brawl. Bianca, however, lifts both Sasha AND Becky over her head for a double KOD. Sasha evades and falls onto the table. Bianca proceeds to hit the KOD on Becky onto Sasha, through the table. A fantastic spot to end a really fun opening segment.

AVERAGE: Rey Mysterio is backstage with his son Dominik. Rey is interviewed about being in the King of the Ring tournament and says that it would be an honor to rule over all of WWE. Rey finishes by saying it would make him sick to see someone like Sami Zayn win the crown.

GOOD: Up next we have our opening match as Rey Mysterio takes on Sami Zayn in a KOTR first round matchup. Before the match, Sami Zayn says that Dominik made the right decision to stay behind and let Rey do this match by himself, even going as far as to say he’s better than his father. This is a fun back and forth match until Dominik eventually comes to ringside. Sami takes off the turnbuckle pad, but Dominik goes to put the pad back on. However, Rey tells Dominik to get off the apron, allowing Sami to roll him up for the win.

GOOD: Up next we have “In defense of Seth Rollins” where Seth will answer for his invasion of Edge’s home last week. Kayla asks Rollins if he felt he crossed the line last week, but Rollins presents his case. He says that he’s been mocked and ridiculed for months, but still managed to beat Edge. However, instead of receiving praise for his big win Seth has been vilified and treated as a monster. Seth says that no one understands him and goes to look for someone who does.

AVERAGE: Up next we have a first round match up in the Queen’s crown tournament as Toni Storm takes on Zelina Vega. This was a decent match, but very surprised that Zelina went over here.

GREAT: Roman Reigns is out next and says that he’s happy that Paul Heyman was able to get the Usos on Smackdown. However, Reigns wants Paul to admit that he is responsible for Brock Lesnar’s free agency. Paul dodges the question by saying that he’s been accused of many things, but he’s never been accused of being stupid. Roman tells Paul to tell Brock that he has no chance to prove his loyalty, and Heyman does just that. This was a solid segment.

GOOD: Adam Pearce and Sonya Deville are backstage when they’re interrupted by Seth Rollins. Seth asks them if Edge is going to be there tonight so he can answer his challenge. Seth says he’s gonna go to the ring and wait for him. Before he leaves, however, he gives them a portrait of Edge and Beth Phoenix.

AVERAGE: Up next is another Queen’s Crown opening match as Liv Morgan takes on Carmella. This was a decent match but Carmella winning was absolutely the wrong call here.

AVERAGE: Mace is interviewed backstage about moving to Smackdown. He says he’s going to destroy the competition in a decent backstage promo. I’m just confused as to how he’s on Smackdown when the draft changes don’t go into effect until after Crown Jewel.

SATISFACTORY: Up next is Happy Talk with Happy Corbin and Madcap Moss. Moss tells a bad joke about a tuba and toothpaste until Owens comes out. He is subsequently beaten down by Corbin and Moss to end the segment. I’m looking forward to Owens in AEW.

GOOD: Backstage, Naomi interrupts Pearce and Sonya and asks why she’s not in the Queen’s Crown tournament. Sonya, however, says that Naomi isn’t worthy enough to be in the tournament. Naomi says that she wants a match, and Sonya says that she will get one next week against Sonya herself. Nice to see Sonya back in the ring but I hope they deliver on that.

GREAT: Up next we have another King of the Ring tournament match as Finn Balor takes on Cesaro. This was easily the best match on the whole show. A great back and forth contest. Finn eventually wins with the Coupe de Grace.

GOOD: Becky Lynch is backstage and talks about how the odds have always been stacked against her and that she’s done everything that’s been asked of her. Sonya tells her to prove she’s the best by signing the contract, to which Becky does.

MUST WATCH: The show ends with Seth Rollins coming to the ring to address Edge. He asks Edge one more time to answer his challenge, going as far as to berate his family. However, much to Rollins’ surprise, Edge shows up to the arena! Edge jumps the ring as Seth goes to get a chair. Before he can use it, though, he eats a spear. Edge beats down Rollins until he escapes. Edge officially challenges Rollins to a Hell in a Cell match at Crown Jewel.

Overall, this was a good enough episode of Smackdown. The contract signing and the Roman segment were great and the Rollins/ Edge segment was a fantastic closer. However, the in-ring action on this show was a tad weak. Rey and Sami was a good match and Finn and Cesaro was easily the match of the night. However, the two women’s matches should’ve been given more time and the winners of those were highly questionable.