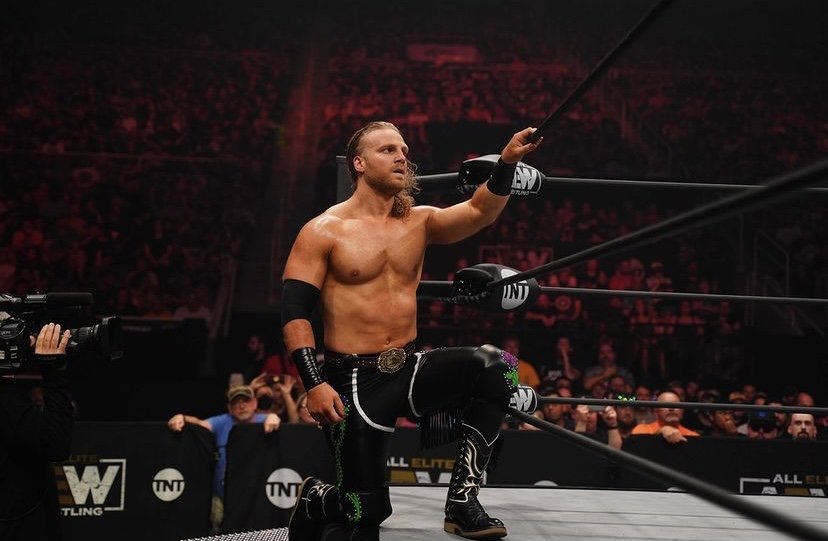 GREAT: After amazing entrances by the Dark Order & Hangman and the Elite, the five on five elimination match began. Karl Anderson of the Elite eliminated Alex Reynolds of the Dark Order first. The next elimination occurred when  Evil Uno eliminated Karl Anderson. Doc Gallows & Stu Grayson both got counted out which means it was 3 on 3. Kenny Omega then hit the one-winged angel on Evil Uno to eliminate him. Matt Jackson then eliminated John Silver to make it a three on one situation. Hangman Adam Page then eliminated one of the Young Bucks. Omega then pinned Page with the One-Winged Angel to win. This match was hurt by the lack of rules enforced at times but was still great.

GOOD: Ricky Starks came out next & said that he covered up for all the problems that Cage caused & when Starks broke his neck, Cage didn’t check up on him. He realized then that Cage is a selfish guy & that he is a star & Cage isn’t. He said that Cage has no charisma & then Cage’s music hit. Cage then started beating up the band that came out to play for Starks & when Cage went to the ring, Hook & Starks fled the ring. This was a good segment & Starks is great on the mic.

GREAT: A very quick but awesome video package showed up next where Hiroshi Tanahashi said that he will be the next challenger for the IWGP US Championship.

GOOD: FTR defeated PNP after what seemed like an unplanned finish happened because Cash was hurt.

AVERAGE: A brawl broke out between Malakai Black & Cody Rhodes which resulted in Black laying out Cody. This was fine but didn’t help their build much.

AVERAGE: Chris Jericho defeated Nick Gage in a very, very violent main event where weapons were used such as light tubes, pizza cutters and chairs. By the end of the match both men, especially Jericho, were heavily bleeding. Jericho won after hitting Gage over the head with four light tubes at once and then hitting the Judas Effect. This match felt clunky at times and lackluster at times.

This show started off great with the opening tag and went downhill as soon as Cash Wheeler suffered an arm injury and never fully recovered, but the show was still great and the crowd helped that very much.