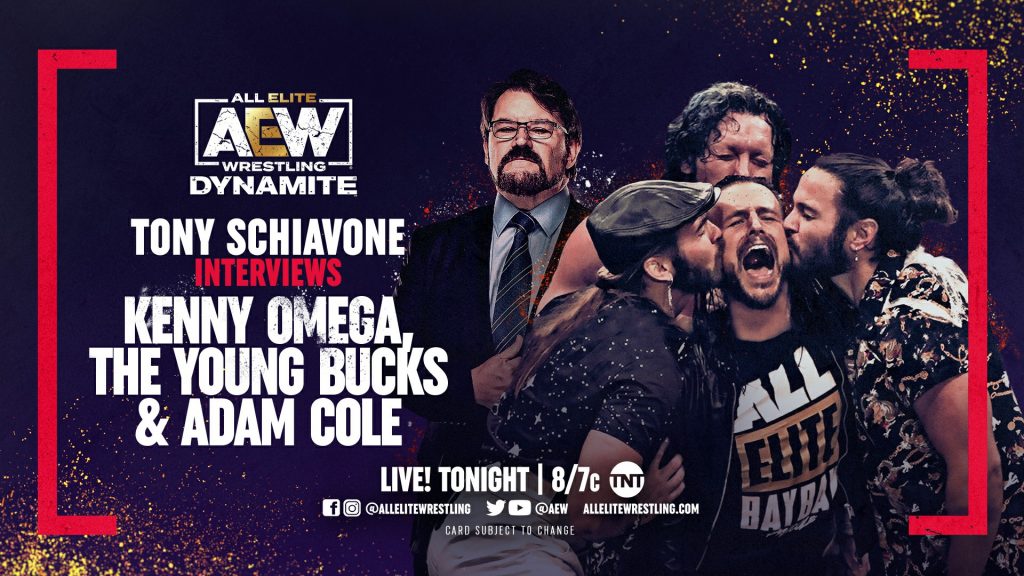 Tonight is the aftermath of one of the greatest wrestling PPVs of all time, All Out. The Lucha Bros defeated The Young Bucks to become new AEW World Tag Team Champions. Kenny Omega defeated Christian Cage to retain the AEW World Heavyweight Championship. CM Punk made his AEW in-ring debut. Lastly, Adam Cole and Bryan Danielson made their AEW debuts! Tonight we find out more about all of these circumstances. I’m ready, are you?

AVERAGE: The show kicks off with Malakai Black against Dustin Rhodes. Dustin immediately goes after Black to brawl. The fight spills to the outside where Malakai puts Dustin Rhodes through a table. As Dustin tries to catch his composure Malakai is inside tearing off the turnbuckle pad. Malakai brings Dustin into the ring where he brings the fight to him. Black targets Dustin’s legs with submissions and strikes. After a while, it appears as though his leg can no longer hold up. Dustin is eventually able to gain momentum. He attempts a Canadian Destroyer on Black but can’t execute due to the leg. Black hits a running knee strike for a near fall! Malakai then searches under the ring and grabs Cody’s boot in an attempt to anger Dustin. Black is successful as Dustin fights back and executes Canadian Destroyer. Near fall! Dustin attempted to execute a splash to Black in the corner where Black moves out of the way for Dustin to crash into the exposed turnbuckle. Black then executed the black mass spinning heel kick for the win. This was a fairly decent match but Black certainly botched the black mass. Either way, the match was entertaining for the most part.

GREAT: Up next CM Punk comes out to address the AEW crowd! As usual, the crowd is electric for his presence. CM Punk gets right to the point by thanking Darby Allin, Sting, and the AEW crowd. Punk says he didn’t know what to expect but now he wants more. The fans serenade Punk to a “you still got it chant.” In return, Punk says we also got Minoru Suzuki vs Jon Moxley. Classy promotion for the main event by Punk. CM Punk then gets into the events of All Out. He shouts out the new signings Ruby Soho, Adam Cole, and Bryan Danielson. Punk then states after the PPV, his wife asked him what’s next? As Punk was getting into the possibilities he’s interrupted by Tazz. Tazz claims that he’s known Punk a long time and is sick of this “love fest” he’s got going on. He tells Punk to never mention any member of Team Tazz in his promos. Punk tells Tazz to send all of the members. He quotes Tazz by saying “beat me if you can, survive if I let you.” While exiting, Punk stares down Will Hobbs. Punk was fantastic as usual! The fans certainly never get tired of him, as it should be. I can’t wait to see what’s next for Punk and Team Tazz.

GREAT: Tony Schiavone is backstage with Ruby Soho. Ruby can barely get started before being interrupted by Britt Baker, Rebel, and Jamie Hayter. Britt Baker tells Ruby she’ll be irrelevant after losing to her for the championship. Ruby rebuttal’s by mentioning she helped Britt break-in. Britt says Ruby’s nickname is the runaway because she ran away from where she sat in catering for 4 years.

SATISFACTORY: Up next is Will Hobbs against Dante Martin. Dante starts strong very briefly before getting destroyed by Hobbs. Hobbs is tossing Martin around like a rag-doll. Will Hobbs is having fun completely wrecking Dante Martin. After a while, Dante somehow gets some fight in. He hits a huge missile dropkick from the top. A near fall sends Hobbs rolling out the ring. As Dante attempts to hit high flying offense to the outside, Hook steps up on the apron to distract Martin. Martin simply jumps over hook crashing onto Hobbs outside. After executing some more athletic offense, Hobbs picks Martin out of the air to finish him with the Power Bomb. This match was a tale of two stories. The fact that Martin was able to execute a comeback made this match better.

GREAT: Dan Lambert is in the crowd with Scorpio Sky and Ethan Page. He goes on to drag CM Punk, Bryan Danielson, and Adam Cole. Lambert proceeds by going on his weekly rant on the AEW company as a whole, including fans.

SATISFACTORY: Matt Hardy is seen saying that he will cut Orange Cassidy’s hair. The camera cuts to Cassidy saying “whatever.”

MUST WATCH: Up next MJF addresses the crowd. MJF says before Sunday, he beat Chris Jericho 3 times. He even says that he beat him a 4th at All Out, but the match was restarted due to bias against him. The bias against him is because people in the back want to be him. MJF then proceeds to diss the city of Cincinnati. He calls out everyone in the crowd to do something but says they won’t because they are cowards. MJF begins dissing Brian Pillman Jr’s sister. Brian Pillman Jr. comes out to set the record straight to MJF about the city of Cincinnati. MJF tells Brian Pillman Jr. not to try going toe to toe with him on the mic. He proceeds to get intensely personal about Pillman’s mother before being attacked by Pillman. Wardlow tries to help but Pillman is able to escape and continue the attack. After Wardlow gets his hands on Pillman, Griff Garrison is forced to come out. He is also assaulted. Holy crap what an amazing segment.

AVERAGE: Up next is Ruby Soho against Jamie Hayter. Hayter imposes her will over Soho to begin the match. Soho is able to fight back before being dumped into the rope. The fight spills to the outside as Jamie sends Ruby into the barricade. Ruby tries to fight back again but is slammed onto the edge of the ring. The momentum remains to be all Hayters. Soho is able to run Hayter’s face into the middle turnbuckle to mount a comeback. Now the momentum belongs to Ruby. Jamie Hayter attempts an electric chair but the move was botched. Ruby is then able to hit her signature kick for the win.

AVERAGE: As Ruby was celebrating Britt Baker attacked her from behind. She beats down Soho until Riho comes out to try and fend off the fight. Riho is wiped out by Jamie Hayter. Britt Baker attempted to curb stomp Ruby on the women’s championship before being fended off by Kris Statlander.

AVERAGE: After the match, the Dark Order begins to fight each other. Tay Conti and Anna Jay come out looking worried as Colt Cabana tries to keep the peace.

AVERAGE: Tony Schiavone is backstage with Tully Blanchard. Tully begins talking about how the performance of the Pinnacle was considered true leadership. He then calls out Sting and says they’ll eventually go one on one.

AVERAGE: Sammy Guevara comes out with a bunch of signs promoting Fuego Del Sol, the Inner Circle, and his wife.

AVERAGE: Alex Marvez is in the trainers’ room with Pillman Jr. and Garrison. Pillman calls out MJF to a match, before being interrupted by The Acclaimed. The Acclaimed challenge Varsity Blondes, before wishing him luck against MJF.

MUST WATCH: Up next, Tony Schiavone introduces The Elite. Don Callis thanks the crowd, braggingly of course, for voting Kenny Omega the number one on PWI’s 500. Callis proceeds to talk about getting the tag titles back, leading to Nick Jackson introducing Adam Cole. The crowd erupts into the “Adam Cole BAYBAY” chant. Adam Cole confronts Schiavone about Britt Baker and says if he looks at her wrong he’ll slap him in the face. Cole kicks Tony out of the ring calling him a nerd before making his point. He calls AEW the greatest wrestling promotion in the world. Thanks to The Elite. Cole says he knows he’s new to AEW but he’s been Elite for a very long time. Now he’s with the very best. The Young Bucks are the best tag team of all time, Kenny Omega is a once-in-a-generation superstar, and now they add on Adam Cole. Now The Elite is complete. Cole says next week he makes his in-ring debut and proves to the world why he is great. Omega takes over the mic to address being interrupted at All Out but is once again interrupted. Bryan Danielson is here and he’s coming out to the ring. Kenny is pissed and kicks The Elite out of the ring to talk to Bryan one on one. Kenny says Bryan is just the person he was looking to talk to. Bryan snatches the mic out of Omegas’s hand and asks the crowd if they want to see Danielson vs Omega. Bryan says Kenny is afraid to fight him because he knows Bryan is better than him, Bryan will kick his head in, and Kenny isn’t on his level. Bryan puts Kenny in his signature cross face before being attacked by The Elite. Christian and Jurassic Express along with Kazarian come out and fend The Elite off. Cutler is left in the ring for Bryan to hit the running knee. Amazing segment right here! Such GREAT stuff!

GREAT: Up next is the main event. Minoru Suzuki against Jon Moxley. The hometown ovation of Moxley is insane! Moxley and Suzuki begin by exchanging forearm strikes to the face. Boot to the face by Suzuki. Moxley returns it! This is an absolute slug out. Suzuki begins to gain momentum on the outside of the ring. The action goes back inside where Suzuki keeps momentum with limb locks. Moxley is able to blast out of the corner with a clothesline to rock Suzuki. The two go back and forth with strikes and bites. They engage in back and forth head-butts before both falling to the ground. Suzuki and Moxley continue the brawl before Moxley executes Paradigm Shift. “This is awesome” and “fight forever” chants are heavy. Suzuki is busted open but keeps fighting before another Paradigm Shift. Moxley is victorious over Minoru Suzuki. What a match! That was an ugly brawl that was great to see!

This was a very lackluster show dare I say SAVED by MJF, CM Punk, The Elite & Adam Cole, Bryan Danielson, and Moxley vs Suzuki. The rest of the show was very poor. I must admit, when necessary, the fans were ROCKING! Noticeable difference in the quality of shows from last week, to this week. Seems like they’ve gotten comfortable with the buzz of All Out. Let’s hope next week is better!