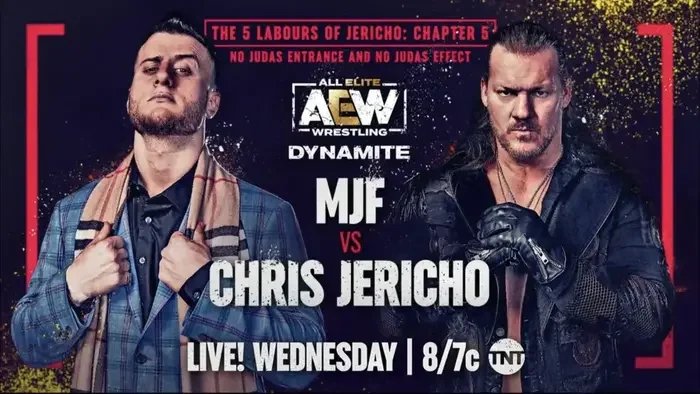 Coming off the heels of Christian Cage defeating Kenny Omega for the Impact World Championship, and right before a rumored HUGE debut of CM Punk on Rampage this Friday night, will Dynamite provide a ‘BOOM?’ We will certainly find out.

GOOD: Sting makes his entrance and waits on the ramp for Darby. Darby’s music plays but he comes from behind and attacks 2.0 with his skateboard. Sting and Allin hit stinger splashes, and the match is officially underway. Sting and Allin bring 2.0 through the crowd towards a backstage area where Daniel Garcia makes the fight a 3 on 2 since anything goes. Darby Allin scales the crowd railing and dives taking out 2.0 and Daniel Garcia. Eddie Kingston then gets involved to even out the playing field. Sting and Darby introduce tables to the matchup but the momentum shifts. 2.0 now has the upper hand. 2.0 hits a double power-bomb to Sting through the table in which Sting instantly pops back up to his feet and hits a double Scorpion Death Drop, followed by a double Scorpion Death Lock. 2.0 tap out to give Sting and Allin the win. Very entertaining and wild start to the show!

GOOD: AEW recaps Sammy Guevara’s special announcement which took place before the show. He proposed to his girlfriend. After the replay, Shawn Spears and Tully Blanchard are seen backstage for a promo. Spears makes fun of the proposal and offers Guevara’s girlfriend a spot in the Pinnacle so that for one night only “she can be on top.” What a douche Shawn Spears is… such disrespect.

GREAT: Up next is Sammy Guevara vs Shawn Spears. Guevara was making his entrance and Spears attacked him from behind. A brawl ensues on the stage in which Sammy Guevara hits a somersault dive off the stage onto Spears. Guevara and Spears continue to brawl on the outside. The momentum shifts to Spears’s side as Spears and Tully execute a Young Bucks style pile-driver. They try to go for it again but Tully is ejected from ringside. Spears pulls down his knee pad and executes unprotected knees to Guevara, and then blew a kiss at his new fiancé. Guevara sees this and attempts springboard offense only for Spears to move out the way. The two go back and forth with slugs and maneuvers. Guevara sets up a steel barricade on the ring apron. Both men are up top trying to throw the opponent into the barricade. Guevara hits a cutter from the top rope. Near fall! Spears hits a C4 from the top rope. Near fall! Guevara then hits a Death Valley driver on the barricade set up, followed up a 630. Another near fall! Guevara then pulls down his knee pad, hits 3 knees to spears face drawing blood, and then hits the GTH for the win. Amazing match.

AVERAGE: Tony Schiavone is backstage with Christian Cage for a word. Before Christian can talk Don Callis interrupts. He brags about giving Christian his first break in pro wrestling and tries to embarrass Christian. Christian says he’s so far in Kenny Omega’s head. He said he was going to take the Impact World Title and he did. Now Kenny is scared for All Out and the potential of Christian taking the AEW world title. He finishes by calling Don Callis a “piece of shit.” This is your average manager vs talent segment, nothing special.

GREAT: Tony Schiavone is in the ring with Dan Lambert, who goes on a rant on the country. He then introduces Junior Dos Santos from UFC along with another fighter as his backup. He proceeds to diss AEW and their fans, as well as the talent. He says if anyone is feeling froggy, come jump. Lance Archer has had enough of the crap and makes his way, only to be attacked on the stage by Ethan Page and Scorpio Sky. Dan Lambert was fantastic in his promo. Great intensity.

GREAT: Chris Jericho is standing by backstage for a word. He talks about the last 5 weeks and the 5 labors of Jericho. He says everything he’s gone through the last few weeks, the blood he’s spewed is all worth it. Tonight he gets his hands on MJF. He doesn’t need the Judas music or the Judas effect. He says he has momentum and the fans and will destroy MJF tonight. Very passionate and fiery promo from Jericho.

GREAT: Omega and Gallows drag Christian back to the ring and the entire Elite attack Jurassic Express and Christian. Kenny hits One-Winged Angel on Christian. The Elite stands tall.

GOOD: Tony Schiavone is standing by with Dr. Britt Baker for a word. Britt says she’s brought back up in Jamie Hayter for Red Velvet and Kris Statlander. Jamie challenges Red Velvet to a match next week. Britt Baker then teases Red Velvet about never being able to win the Women’s Championship. This was a short but sweet promo.

GREAT: Tony Schiavone is back in the ring and introduces Paul Wight. Schiavone thanks Wight for coming to the ring last week and helping with QT Marshall and The Nightmare Factory. Paul Wight says it felt so good to be back in the ring and put his hands around Aaron Sollow’s neck for a chokeslam. Wight was about to make an announcement, but QT interrupted. QT assumed Paul was going to announce a return to the ring and says Paul shouldn’t announce something in which he’ll let the fans down. Marshall brings up Wights surgeries in a way to embarrass him. Wight says QT is wrong if he thinks he’s embarrassed and proceeds to make his announcement. Paul Wight vs QT Marshall at All Out. This was an excellent promo from both Marshall and Paul Wight.

AVERAGE: Tony Schiavone is now backstage with the entire Elite. He announces that Tony Khan has let him know that there will be a tag team tournament to find The Young Bucks new contenders for All Out in a cage match. The Elite get angry and storm off.

AVERAGE: Tazz is in the ring and introduces Hook and Ricky Starks. Ricky Starks calls out Brian Cage, but the camera cuts backstage for a brawl between Cage and Will Hobbs. Starks and Team Tazz go to follow the chaos as the camera cuts for the next segment.

GOOD: Tony Schiavone is backstage with the Death Triangle. Pac says he knows no better place than Chicago to embarrass Andrade. He says Andrade will have no chance. Andrade then approaches Pac and the triangle. He says if Pac wants the match he has to agree to all his terms. He hands Pac a massive book and walks off. Another short but sweet promo.

AVERAGE: Up next is Penelope Ford vs Thunder Rosa. Rosa has all the momentum as she takes the fight to Ford. The fight spills to the outside where Penelope Ford hits a cutter to Thunder Rosa on the outside. Momentum shifts to Ford now. Penelope Ford executes an innovative top rope knee drop to Rosa on the apron. The fight begins to go back and forth before Thunder Rosa takes all the momentum. She goes for the Fire Thunder Driver but Ford reverses. The two trade reversals for a few before Rosa makes Ford submit with a chokehold. Decent matchup, nothing too special.

GOOD: Tony Schiavone is backstage with Brock & Arn Anderson. Arn addresses Malakai Black’s debut. He then announces Brock has a match with Malakai next week, in which he tries to talk him out of it. Brock Anderson tells Arn he isn’t asking him, he’s telling him. This was a short, but decent promo.

GREAT: Jon Moxley is backstage ripping the entire Elite. He says everyone must have forgotten who’s at the top of the food chain, and this Friday Daniel Garcia has no idea what he’s getting into.

GREAT: Up next is the main event. The 5th labor of Jericho. Chris Jericho vs MJF. If Jericho uses the Judas Effect he will be disqualified. Jericho also can’t use the Judas entrance. Jericho enters to no music as the crowd serenades him with the Judas lyrics. MJF pushes Jericho to begin the match. He tries to toy with Jericho with taunts. Jericho attempts the lion-tamer sending MJF rolling out the ring. Jericho then hits his springboard dropkick followed by a cross body to the outside. MJF fights Jericho off and then grabs the camera just like Jericho does, and puts up his middle finger. The momentum is in MJF’s favor as they hit the ring. MJF begins to target Jericho’s arm sending him into the steel post. He continues to target Jericho’s arm with knee drops and arm locks. Both men hit a double close line giving both men breathing room. Jericho takes over the momentum as he begins to take the fight to MJF. It’s short-lived as MJF exposes Jericho’s hurt elbow, and executes a double foot stomp to the arm. Jericho drops MJF with a shoulder tackle and hits the Lionsault. Near fall! The crowd erupts into a this is awesome chant. Jericho hits a top rope hurricanrana. Another near fall! Jericho and MJF begin to engage in a fistfight. MJF spikes Jericho with the Heatseeker, for a near fall! Jericho puts MJF in a chokehold in which MJF grabs referee Aubrey Edwards to cause a distraction for a low blow. Jericho falls and MJF hits the lion-tamer on Jericho. After spending significant time in the hold, Jericho finds the ropes. While the referee is distracted Jericho hits MJF with a bat. He was going to go for Judas Effect but hesitated. MJF locked in Salt of the Earth to secure the submission victory. This was a very good matchup! The atmosphere was electric.

Minus what felt like an interview every 5 minutes, this was a really good show. Sting & Darby Allin vs 2.0 was a short but sweet, right-to-the-point matchup. Very entertaining. The Young Bucks vs Jurassic Express was also an awesome match. The post-match beat down by the entire Elite was amazing. Things feel personal between Christian and Kenny Omega. Speaking of personal, the main event was fantastic. It was pieced together very well, and the closing sequence was great. Great episode of Dynamite.