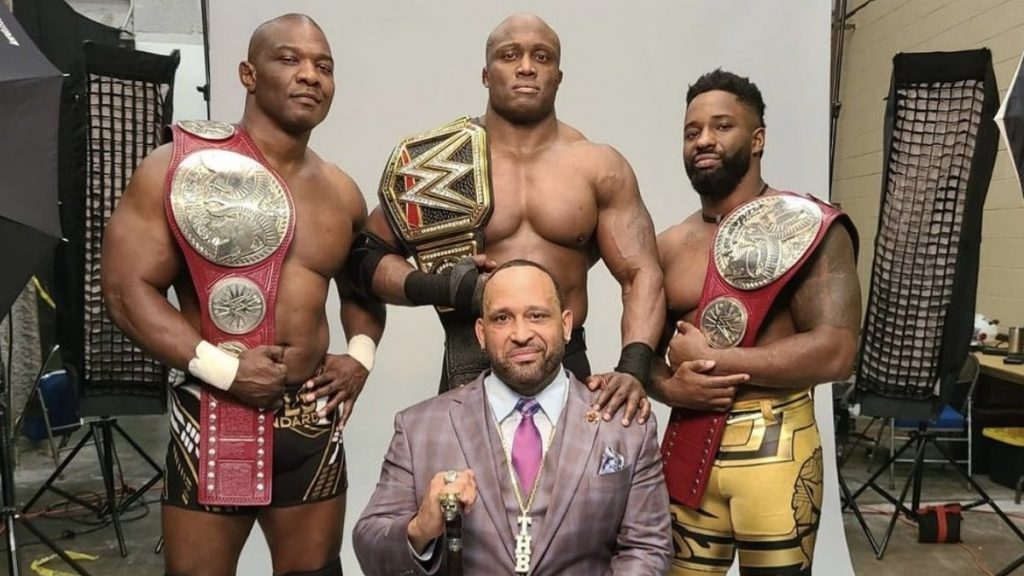 Since the stables’ formation in early 2020, The Hurt Business has quickly risen to the top of the ranks of professional wrestling and solidified themselves as a key part of WWE Raw programming. What wrestling fans may not know is that there were plans for the dominant stable to include Ring of Honor star Kenny King.

In an interview with Inside the Ropes, Ring of Honor star Kenny King revealed that the stables’ manager and WWE veteran MVP vouched for King to be included in the Hurt Business.

“I used to get a phone call like that, like once a month with The Hurt Business ‘What are you doing?’ ‘I’m still under contract’ You know if Vince wants to come buy me out my contract that I’d be there in a minute.”

The ROH star expanded on conversations he had with the Hurt Business stable members:

“We just had a little out in three of us, and we were just sitting there talking about how, you know, just the chemistry was just so natural, and it works so well. And there were just so many places that, you know, we can all cover some of the different areas with three of us and with our characters andwith our wrestling, and it just covered everything. So, you know, we talked about it quite often, you know, with with contractual obligations and things, politics and all the bullsh*t. It is what it is. We never rule it out. Because it is one of the I mean, the three of us together would, it’s always going to be money. It will always be money, it was always money. So, you know, you never know what might happen in the future.”

During the Inside the Ropes interview, King did not only express his interest in the stable but was also very complimentary of current WWE Champion Bobby Lashley:

“I’ve always known that Bobby Lashley was World Championship material. His work in the last year and a half has been out of this world. I was one of the people that turn my TV off when I saw him bending over pointing at his ass because he’s just not a bend over. He is an absolute, he’s an animal, he’s a walking tank, he can fight you beat you up for real. So there’s not too many guys in pro wrestling that you would be like it realistically, even if I didn’t want to let him win, I couldn’t do anything about it.”

It’s up in the air as to what plans future WWE programming holds for The Hurt Business. Ring of Honor main-stay Kenny King could indeed prove an exciting addition to the dominant stable.

Make sure to follow Wrestling Republic on all social media platforms and check back at wrestlingrepublic.com for future updates on The Hurt Business and WWE Raw programming.

Bayley Reveals Why She Wants To Lead A Women’s Group, Including Why IYO SKY And Dakota Kai Were Involved