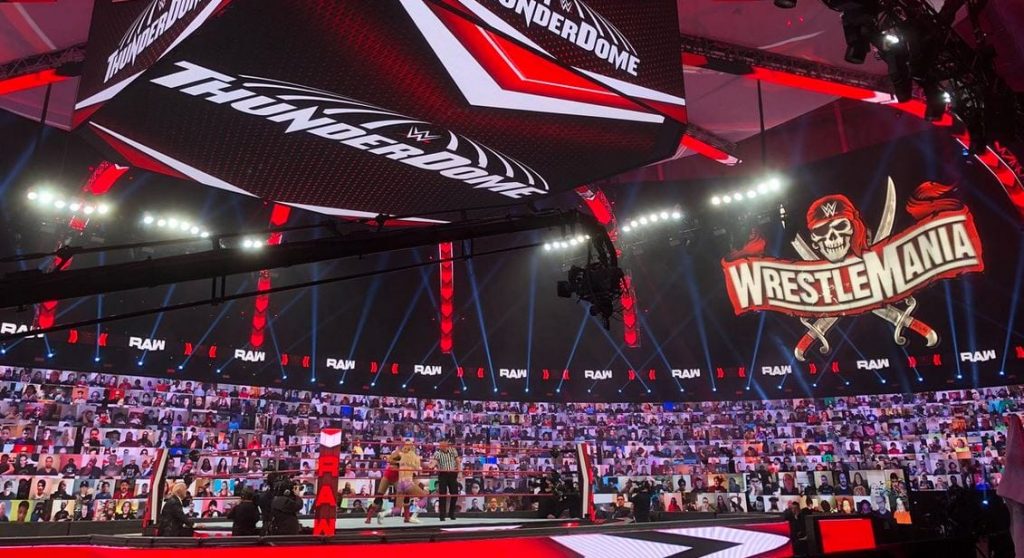 Since April 12, the WWE ThunderDome has called the University of South Florida’s Yuengling Center home, but the pro wrestling organization was robbed over the weekend.

The University of South Florida Police Department is seeking assistance in identifying a person who took many things belonging to WWE from the Yuengling Center (current home of WWE’s ThunderDome).

On Saturday, June 5, an alert was sent with many surveillance photographs. Between the hours of 12:10 and 1:58 a.m. on Saturday, May 22, the event happened.

The Bulletin reads, “”On the above date and time, the unidentified suspect pictured below, removed several items from inside the Yuengling Center belonging to WWE. The suspect below is seen wearing a red shirt, blue jeans, and black sneakers. He appears to be a H/M between the ages of 25-30 with brown hair, a mustache and light goatee. If information about the suspect is ascertained, please contact the USF Police Department at 813-974-2628.”

The whole press release, as well as images, may be seen below. As additional information on the situation becomes available, we’ll update you.

Since the day following WrestleMania 37 in April, WWE has had their TV and pay-per-view production at the Yuengling Center in Tampa. Since August of last year, it has become the third building to house their special “ThunderDome” set-up.

The crime was allegedly perpetrated in late May, but the notice was just sent out yesterday night.

This comes just over a month before WWE’s residency at the Yuengling Center comes to an end, as the company will return to the road to tour the United States beginning with the July 16 episode of Friday Night SmackDown.