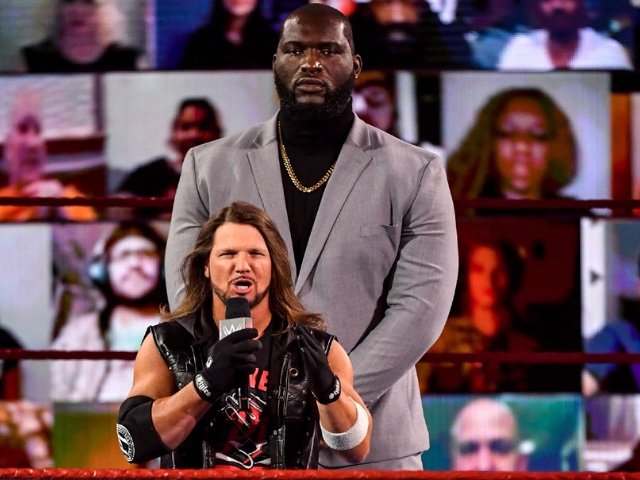 WWE Superstar Omos has opened up about how he found out about his Gigantism and well as revealing the details about how a brain tumor put a holt to his basketball career.

In an interview on the latest episode of Out Of Character With Ryan Satin, Omos spoke about his brief spell playing NCAA College Basketball.

During the conversation the 7’3 giant explained to Ryan Satin how he found out about his brain tumor, which led to him ending his NCAA College Basketball run.

“It was an email from a doctor and it was sent to the President of the University and my coach was CC’d in the email,” Omos revealed to Satin. “My coach said to me ‘I don’t know who this guy is, but he seems like a very high up guy on the campus. I want you to look at this email.’

“I read it, it said ‘hey, I noticed that one of your guys, Tolulope Omogbehin, he’s a big guy but I think he has a tumor by the size of his face and the size of his hands. He has a pituitary tumor and he has to get that checked out asap.’ I’m reading this email like no way, I’m fine and I looked at my coaches and they said ‘what do you think?’

“I said, ‘I don’t think I have anything. But hey, I’m going to do it just so I can have a piece of mind.’ I tried to shut them up, that Wednesday I did an MRI, took about a couple days, went to the trainers’ room and they’re like nah, go up to the coach’s office.

“Go up to the coach’s office, it’s the President of the University, all the doctors are in there, they’re like ‘so, this is your MRI right here of your brain, you see that little spec right there? You have a brain tumor. We don’t know if it’s benign or it’s a cancerous tumor but we’re going to have to put you on the sides for a while and figure out how to deal with this.’

“It was a shock to me because when you tear your ACL, you can always come back and control it, do rehab and get stronger and faster, that’s easy. This threw such a curveball because it was out of my control, I could not control anything and I remember having to do the first surgery and that was very very trying for me. They had to go through my nose and it was very very traumatic.”

Omos then went on to reveal how he found out about his Gigantism as well as having partial crushes dieses.

“In the process of doing the tests, they found out that not only did I have the pituitary tumor, I had gigantism, I had partial crushes disease, which is very rare,” Omos said. “It’s different forms of large human beings but it’s different variations and I had all three combinations.

“I had the other three combined and my case was very very unique. It was the first time in medical history they had seen someone with all three together and I became this anomaly in the medical world. I had a journal published about me, about my case.” (Via Out Of Character With Ryan Satin H/T WrestlingInc)