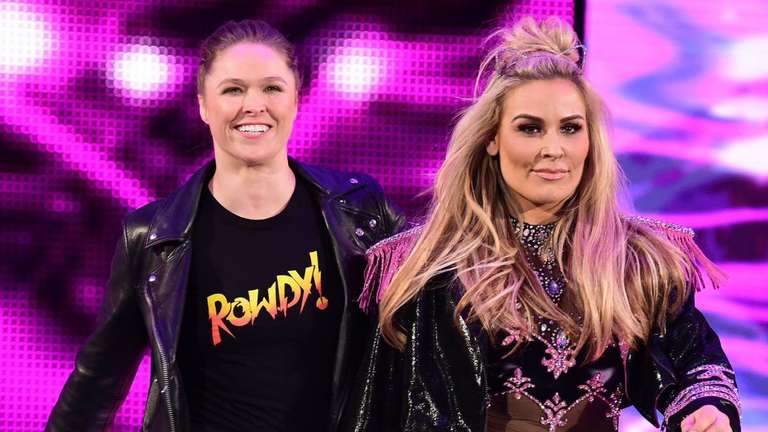 Ahead of their match at MITB for the Smackdown Women’s Championship, both stars called each other on social media.

Ronda began the exchange of words by throwing shade at Nattie for The Neidhart’s YouTube Channel and her sister’s content.

Jenni, Natalya’s sister, has an individual OnlyFans account which is promoted without shyness by Nattie.

“Some[one] needs to tell you your discount only fans sister fetish youtube channel is weird and embarrassing, @NatbyNature.” Ronda tweeted out.

Natalya responded right away saying that she would rather make videos with her attractive sister than discussing “conspiracy theories” that are “weird”.

“It was either do a channel with my hot sister or bring people to a rock at the back of my farm to cry and talk about conspiracy theories. I chose the sexy sister thing. Cause we might be weird, but we’re not as weird as your hot takes on life. https://onlyfans.com/jenni-neidhart,” Natalya responded.

The conspiracy theories words are inspired by theories Ronda has shared on her social media over the years.

One of the most famous was back in 2013 when Rousey retweeted a controversial video regarding the Sandy Hook Elementary School shooting that occurred on Dec. 14, 2012, in Newtown, Connecticut.

The retweeted video was from the “ThinkOutsideTheTV” YouTube channel, and its purpose was to highlight a conspiracy theory about the legitimacy of the shooting itself.

At first, Rousey called it “extremely interesting, and must-watch” content, words that were received with a lot of social media backlash.

Rousey then deleted the video she originally posted and supplied a follow-up tweet, writing, “Asking questions and doing research is more patriotic than blindly accepting what you’re told.”

Days after Rousey posted a public apology expressing “I never meant to insult or hurt anyone, sorry if anyone was offended. It was not my intention in the least.”

Continuing the feud for MITB 2022 Nattie delivered a backstage promo.

Where she said that the Sharpshooter is clearly far more damaging than Ronda’s armbar because it caused her to miss the show this week.