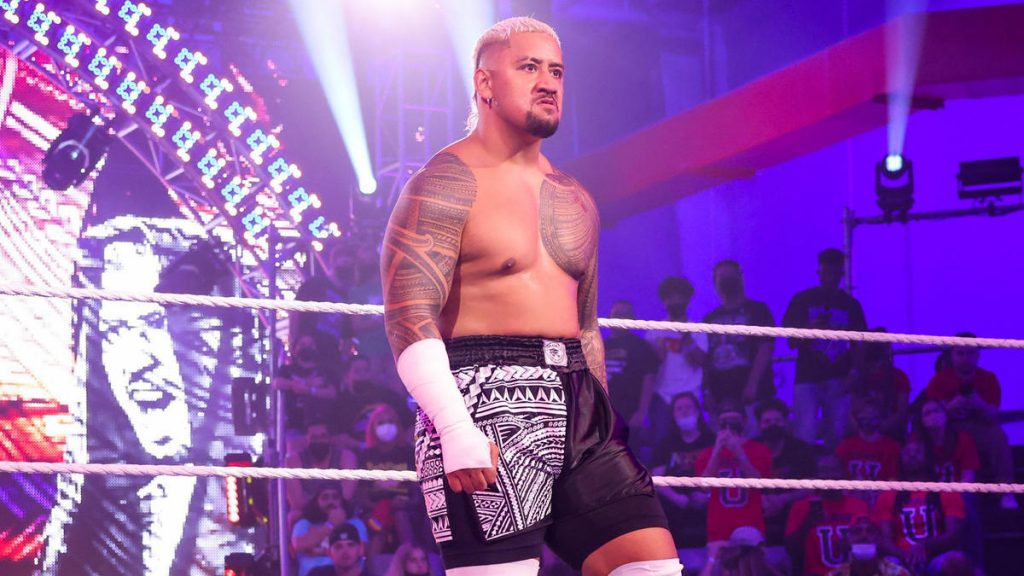 Although a WWE star, Solo Sikoa recently acknowledged AEW Talent with a shout out

WWE SmackDown star and member of The Bloodline Solo Sikoa recently sat down to speak with YouTube’s Josh Martinez’s “Superstar Crossover”. He spoke about his time in NXT, being on the main roster with “The Bloodline” and a little on some AEW talent.

NXT Had Plans For Solo Sikoa

While speaking with Josh Martinez Sikoa talked about what he thought his next for him in NXT. He also wanted to set the record straight with his final title reign before getting called up to the main roster.

“I felt like before I got called up, there were a lot of plans to after Carmelo Hayes and maybe Bron Breakker, you know, generation versus generation,” Sikoa said.

Even though those plans didnt happen he’s ok with the result. “I felt like it worked out just fine, man”.

Speaking about his final championship run, he wanted to set the record straight on something. “Just to let everybody know, I’ve never lost the North American Title. I had to give it up, so it’s two different things. I never got beat.”

Sikoa Talked About An AEW Star

Although the conversation primarily revolved around Sikoa and his time woring in the WWE. Solo took a few moments to speak on AEW star Ricky Starks and voiced his respect for Starks work.

“Shout out to Ricky Starks. I know who he is. I’m also a fan of his mic work. He knows how to use a microphone and he knows how to get down. I think it’s cool. I think it just shows respect, man, because at the end of the day, we both know, and everybody knows this, that this is a hard business to do. Not everybody can do it. If it was easy, everybody would do it, but everybody doesn’t do it. So I think when one worker shows love to another one, especially in a different company, I think that’s much respect. I mean, at least that’s what I think. That’s cool. Shout out to Ricky Starks.”

What Paul Heyman Has Taught Solo

Sikoa wanted to be sure it was known Paul Heyman and his family’s relationship runs deep. “First of all, he’s been around my family for over 50 years. So he’s been around Roman’s dad. He was around my dad. I don’t know if a lot of people know this. My dad was one of the first Paul Heyman guys when they started in WCW because he was their manager.”

On to the next generation of Heyman men Sikoa spoke of his influence, “He’s with Roman and my brothers and now with me. There’s a lot of things that he’s taught me and it’s still teaching me. He said this is the place where you can go be a big superstar and make some money to take care of your family.”

Solo Sikoa is a strong addition to “The Bloodline” and has a bright future on the main roster. Keep an eye on WrestlingRepublic.com for any news or updates on The Samoan Enforcer.

You can watch the full interview with Solo Sikoa below: