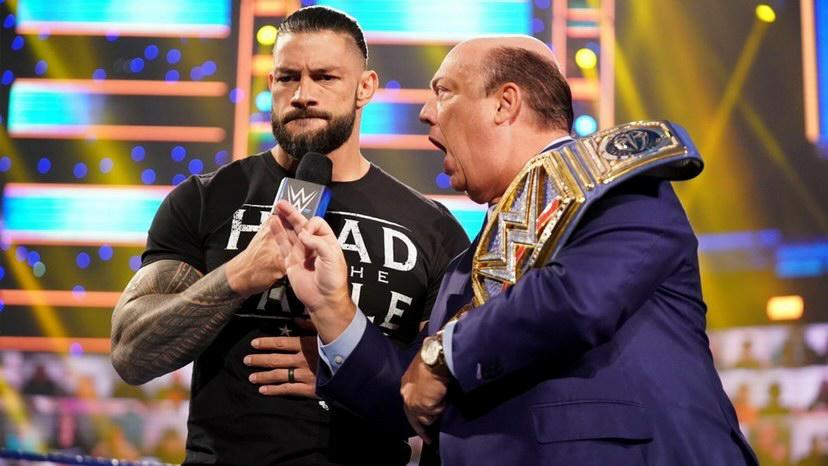 WWE didn’t do as good as you’d expect on Smackdown this week. This week just more average than usual. With a slow opening hour to a pretty good main event, this didn’t feel much like a go home show.

GREAT – We open up Smackdown with Jey Uso introducing the WWE Universal Champion, Roman Reigns. Roman Reigns comes down to the ring and tells Jey they have to address two things, Jimmy Uso and Cesaro. Roman starts off by saying he likes Cesaro, that he thinks he’s one of the best wrestlers in the world. But he can’t beat Roman Reigns. The Tribal Chief points out that Cesaro has had 0 world title matches while he has had 39. Then Roman addresses Jimmy Uso. But before he could get started, Jimmy comes out so Reigns can talk to him to his face. The Head of the Table tells Uso that he needs to get on board like his brother Jey. Jimmy tells Roman that he’s “nobody’s bitch” and then asks if Roman loses the Universal Championship, and the Usos win the Smackdown Tag Team Championships, would that make them Head of the Table. This clearly pisses Roman off and he’s goes on about how it doesn’t work that way, and that he’s the only one who provides for the family, before asking Jimmy does he think Roman can beat Cesaro. Jimmy tells Roman that, no, he doesn’t think Reigns can beat Cesaro. This visibly pisses Roman off once again, and he asks Jimmy does he think that he himself can beat Cesaro. This leads to Jimmy calling out Cesaro, who accepts the challenge, ending the promo.

GOOD – The first match of the night is a WWE Women’s Tag Team Championship match between Natalya and Tamina, and the champions, Shayna Baszler and Nia Jax. After some pretty decent back and forth action, the challengers won the titles after Tamina hit Nia Jax with a splash from the top rope.

Result: Natalya and Tamina via pinfall

BAD – After the match we got a quick post-match interview with the new Champions, and this was all over the place. Natalya and Tamina basically said how proud they were of each other before Natalya saying everyone who’s ever had a dream should never give up. They were treating this win like the WrestleMania main event. This promo was not needed and we could’ve been better off without it.

GOOD – Next on Smackdown we had Apollo Crews present Commander Azeez with the Nigerian Medal of Honor. The presentation was interrupted early on by Big E on the big screen who told Apollo that he would soon reclaim his Intercontinental Championship, before Sami Zayn came out to ask Apollo Crews for a title match, only to get rushed by Commander Azeez. As Zayn was trying to leave, Kevin Owens came out and tried to attack Sami himself. Zayn runs back into the ring and gets attacked. Owens enters the ring and a brawl breaks out. Big E runs out and joins the fight. The fight ends with Kevin Owens on top as Apollo Crews and Azeez flee the scene.

GOOD – Then it was time for the second match of the night, Rey Mysterio vs Dolph Ziggler. Mysterio beat Ziggler via pinfall in this short, but good match, however there is a big issue with this. Ziggler is one half of the Smackdown tag team champions. He is supposed to be a winning champion. Ziggler hasn’t won a match in the past 4 weeks and its kinda weird to see the champions going into the PPV with little to no momentum.

AVERAGE – Bianca Belair comes out and is interviewed about her WrestleMania moment against Sasha and her upcoming match against Bayley. When Bianca gets to the subject of Bayley she’s confused as to where she is and then Bayley pops up on the tron via satellite. Bayley and Bianca begin going back and fourth like little children and its kind of an embarrassing look for Smackdown Women’s Champion.

GOOD – Next up in the semi-main event we have Shinsuke Nakamura vs King Corbin. This match felt like a turn around for Corbin. Usually I would find Corbin boring and not interesting but he had some really good offense in this match and actually ended up on top.

GOOD – After the match, Shinsuke Nakamura attacked Corbin, taking him down and hitting him with the kinshasa. Then Nakamura looked over and grabbed Corbin’s crown, placing it upon his own head. Perhaps this is foreshadowing a future King of the Ring Tournament?

GREAT – Now it is time for the main event. Cesaro and Jimmy Uso face off in 1 on 1 action in Uso’s first match in over a year. Cesaro gets some good offense in, like at one point, Cesaro hit a really good european uppercut on Jimmy while he was on the top rope. Not only did Cesaro look good, but so did Uso. Uso about knocked the wind out of Cesaro with a really good executed superkick. However, towards the end of the match, Roman Reigns got involved and Cesaro won by DQ.

GOOD – After the match, Roman Reigns continued to attack Cesaro. Jimmy Uso was pissed at Roman, telling Reigns that he had Cesaro. Using this distraction, Cesaro got the upper hand on Roman as Jimmy watched on. Jey Uso then came out to help the Tribal Chief but Jimmy tried and failed to stop him. Cesaro got the upper hand on Jey Uso as well attacking, sparking Jimmy to get in and help his brother only to get attacked as well. The show ended as Roman Reigns looked on as Cesaro gave not 1, but 2 Neutralizers to Jey Uso.

This was probably one of the weakest go home shows for WWE in a while. This did not hype me up for WrestleMania Backlash anymore than I already was. Hopefully this is not a taste of what’s to come this Sunday, as I hope that WWE does their best to pick up the pace a little bit.