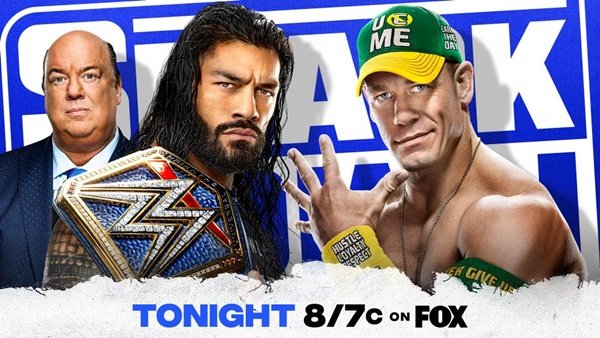 What will happen one day before the Biggest Party of the Summer? Last week Seth Rollins tried to embarrass Edge. John Cena also tore into Roman Reigns. Who gets the last laugh on the final night of wait before SummerSlam? Let’s find out.

MUST WATCH: The show starts with Edge making his way out to the ring. They replay the Rollins promo from last week ripping Edge. They cut back to the arena where Edge is sitting in a chair in the ring with the lights dark. Edge says he saw and heard what Rollins said last week. He says it sat with him. The feeling of Rollins boot on his neck in 2014 still sits with him today. Edge said he was worried about his life, his wife, and his kids. Last week Rollins threatened all of those same things again. Edge acknowledges his neck history and says he knows the dangers of the Curb Stomp. Edge says he knows that with everyone else, the chatter is always mind games. With Seth it’s different. Seth means everything he’s said. Therefore Seth has pushed him into a dark place. Edge hates this dark place not only because it’s hard to come back, but also because he likes it. At SummerSlam, Edge says he’s not going to just beat Seth. He’s going to break, and humble him. At SummerSlam, he’s going to burn Seth Rollins down! Great intensity from Edge! His passion made for greater anticipation for SummerSlam.

AVERAGE: The camera cuts backstage to Rey and Dominik Mysterio. Dominik says he knows Rey is going to beat Jey Uso tonight, and at SummerSlam, they will win the tag titles again. Rey tells Dominik to take it one match at a time. He tells him to simply go out there and have his back. Rey and Dominik make their entrance, and then the camera cuts backstage to Jimmy Uso hyping up Jey Uso.

AVERAGE: Up Next is Rey Mysterio vs Jey Uso. Collar and elbow to begin the match, Jey Uso imposes his power over Rey. They lock up again but Rey’s speed and agility get the best of Uso. The match is back and forth until Rey Mysterio hits a springboard moonsault to take out both Usos on the outside. Momentum shifts back to Jey Uso but Rey creates space. Uso picks Rey out of the air with a Samoan Drop. Jey Uso sets Rey Mysterio up on the top rope. Rey hits a hurricanrana from the top rope. Near fall. Mysterio hits a springboard crossbody for a near fall. Uso hits a pop-up neck breaker for a near fall. Back and forth matchup. Dominik attempted to assist Rey with a pin the way the Usos won the titles. The referee sees this and ejects Dominik. Rey confronts Dominik about it only to be attacked by Jey, and sent in the ring for a Uso Splash. Jey Uso secures the win!

POOR: Baron Corbin makes his way out to the arena with Big E’s briefcase. Corbin vs Owens is up next. Owens starts the match with a strong offense. Strikes and a senton. Corbin executes his signature exit and re-enters the ring clothesline. Momentum is Corbin’s now until he eats a superkick, falling to the outside. Owens hits another senton on the outside. Corbin tries to run away from the match but out-comes Big E. Big E assaults Corbin and tries to get his case back. Corbin escapes with the case.

SATISFACTORY: Kayla Braxton is backstage with Bianca Belair. They replay the events from the contract signing last week. Belair says just hearing the name Sasha makes her skin crawl. Bianca says she wants Sasha to witness what she does to Zelina Vega and Carmella. Belair says she’s done playing nice, now everyone will see the meanEST, the nastiEST, the baddEST in WWE.

POOR: Shotzi and Nox vs Tamina and Natalya is next. Shotzi and Tamina start it off. Tamina beats down Shotzi and tags Natalya for a double team. Natalya now takes the fight to Shotzi. Momentum is all Natalya’s. After having the whole match in their favor, Shotzi executes the upset by hitting a roll-up for the win. This match felt pointless, but I get the point of being underdogs pulling off the win.

GREAT: Up next Seth Rollins will address Edge. Rollins makes his entrance into the ring. Seth says he likes Edge’s style. Rollins said he heard what Edge had to say, and all he did was scratch off every excuse as to why he will lose at SummerSlam. Seth tells Edge there’s no shame in his shortcomings. The lights turn red and the Brood song plays. Edge comes on the screen and tells Rollins to beware. A very dark blood-like substance pours onto Rollins. Rollins is fuming! Great segment with Edge showing the lengths he’s willing to go to.

POOR: Next up is Montez Ford vs Otis. Ford slaps Otis in the face. Otis begins to toss Ford around. Montez begins delivering strikes to Otis only to be out-powered. Ford begins to flurry again. Otis swats Ford out of the air and hits his signature splash. Easy win for Otis.

POOR: Up next is Shinsuke Nakamura and Rick Boogs vs Apollo and Commander Azeez. Boogs shows off his power by swinging Apollo Crews around in the gut-wrench position. Apollo tries to put up a fight but Boogs regained momentum. Boogs tagged in Nakamura while Apollo tagged in Azeez. Azeez brings the fight to Shinsuke for a while before both men tag back out. Boogs gets the pin over Apollo. Very short match.

SATISFACTORY: Carmella attacks Bianca Belair as their match is now up. Carmella fires out of the gate with an assault on Belair in the corner. Bianca tries to fight back but is dropped on her back by Carmella. Momentum is all on Carmella’s side. Bianca Belair begins to power out of a rear-naked choke. She deadlifts Carmella into a vertical suplex. The fight goes back and forth now, but not for long as Belair hits KOD on Carmella for the win. Back-to-back wins for Bianca Belair have her looking strong ahead of SummerSlam.

GREAT: Roman Reigns and John Cena go face to face next. Roman Reigns makes his way to the ring first. Cena gives Reigns no time as he interrupts to a HUGE POP! Roman Reigns says John Cena came out last week and said a lot of dumb stuff. Reigns tells Heyman to say that no one has beaten this version of Roman Reigns. Cena says the impossible is possible. Everyone knows it except for Roman. Cena says he is here to take the championship and do movies so that Roman can stay there as an embarrassing failure. He’s going to bring Reigns back to earth and all it’s going to take is 1..2..3. The reason why Reigns is angry is that all Cena has to do is never give up, and it’s 1..2..3. John Cena says tomorrow the champ is here and all it will take is 1..2..3. Roman Reigns says Cena should have rethought coming back because he beats people so bad WWE no longer has use for them. Roman Reigns says let’s up the stakes… either he walks out of SummerSlam Universal Championship, or he leaves WWE. They go to shake hands but Reigns attempts a Samoan drop in which Cena reverses into a roll-up for 1..2…3. Great segment. What will happen at SummerSlam?

Edge delivered such a passionate promo I couldn’t help but be invested. Returning later on in the night to spill the Brood liquid on Seth was a great touch. Bianca Belair was booked well and strong. She must pull out all the stops to beat Sasha at SummerSlam. Last but not least, John Cena was phenomenal on the mic as usual. Roman Reigns upping the stakes and saying he’ll leave WWE if he loses created new suspense that this build has been lacking. Most of the show was lackluster, but Edge, Belair, Cena, and Roman were the MVPs of this episode.