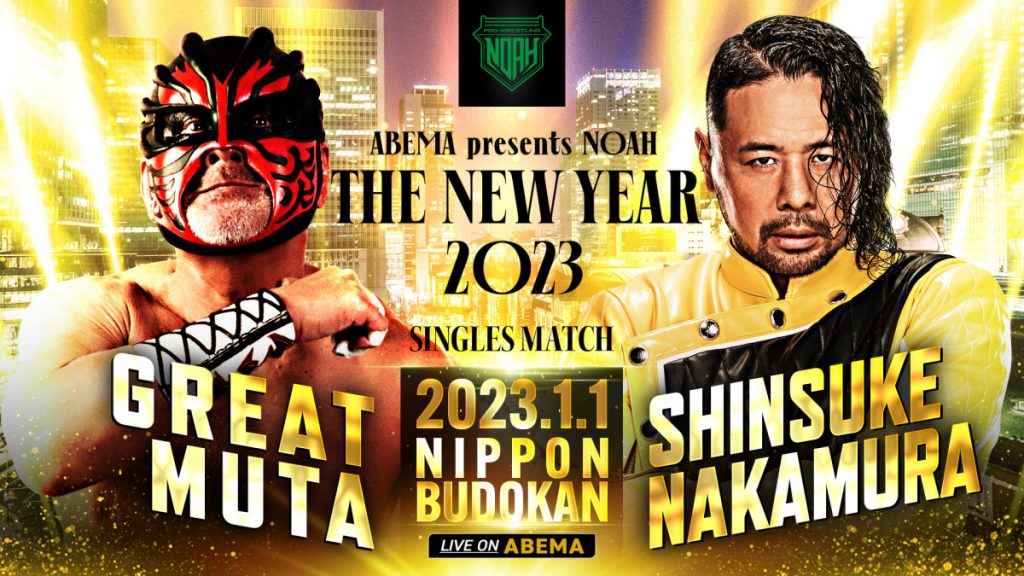 Today, Pro Wrestling Noah revealed that Shinsuke Nakamura will face The Great Muta at New Years in Budokan for Noah. This will be one of the last matches for Keiji Muto as the Muta persona before his retirement in early 2023.

The Great Muta/Keiji Muto is currently on his retirement tour. Muto’s retirement tour is set to end next February at the Tokyo Dome next year. Keiji Muto’s last match in his career is set to have long-time rival, Sting involved in the match. His retirement tour so far has seen Muto/Muta face greats like Kaito Kiyomiya, and tag with the likes of NJPW’s Great O Khan. The Great Muta recently appeared on NJPW where he cost The Great O Khan to advance in the NJPW WORLD Championship tournament to Toru Yano. Muta’s final match with NJPW will be at Historic X Over in a 6 man tag with Yano, Okada against Great-O-Khan, Aaron Henare, and Jeff Cobb. The Great Muta’s last match will be at Ariake Arena on January 22.

Muto’s match with Nakamura will be under his Muta gimmick. After the match got announced, The Artist of WWE posted on Twitter that it was a miracle.

This will be WWE’s first time opening the ”Forbidden Door” with a Japanese company. As Shinsuke Nakamura was a big star in NJPW before his venture into WWE, this will be his first time wrestling for another company under the WWE banner. This match could be the future of what’s more to come for WWE under Triple H and his version of the company.

As Muta’s career comes to an end, this is sure to be a heck of a match to kick off Puroresu in 2023!