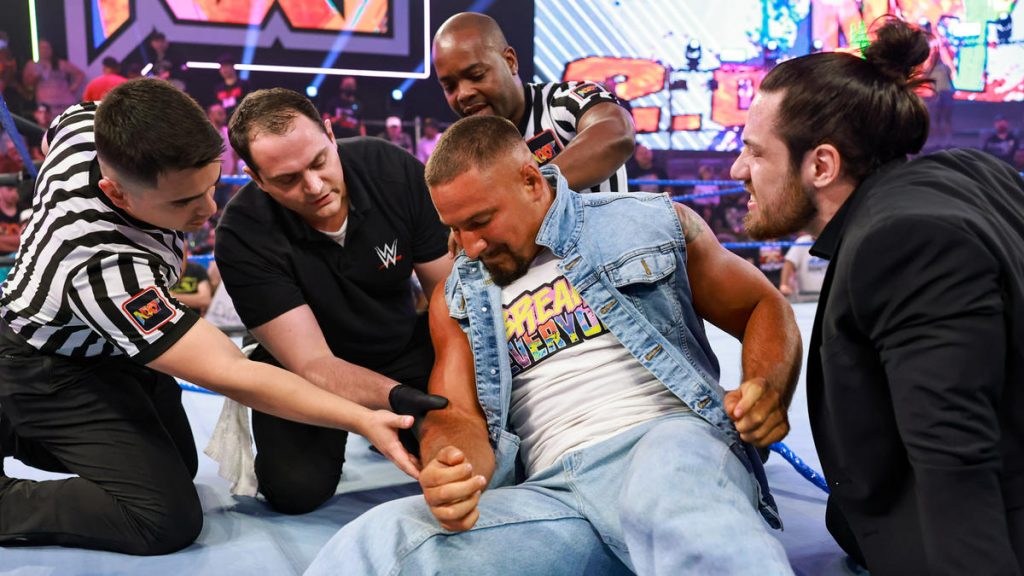 Overall NXT prepared their audience in a fairly good way for the Great American Bash. Tension in the Diamond Mine continued to evolve, Bron Breakker nearly had his shoulder separated and Nikkita Lyons was able to make a somewhat successful return to the ring. Kiana James stole the victory and got an upset on Indi Hartwell. Pretty Deadly and the Pretty-Rowdy Bros, Briggs and Jensen are on a collision course for the UK Tag Team championships.

NXT looks to put the finishing touches on the Great American Bash. We have a number one contendership match for Toxic Attractions’ women’s tag team championship. Nikkita Lyons and the NXT Uk Tag Team champions Briggs and Jensen both return tonight. Bron Breakker and Cameron Grimes go face to face before their big championship match as well.

GOOD Cora Jade and Roxanne Perez Vs Katana Chance and Kayden Carter – Winner gets  NXT Women’s Tag Team champions next week: This starts off as face vs face as they are all fan favourites. To clear something up, Roxanne still has her guaranteed championship match and has a chance to earn another one. The “Toxic” lounge returned for Toxic Attraction as they were able to watch from above. The match started off quite average, there was solid in-ring action but no real story and the crowd didn’t care that much about it. The crowd was slightly engaged in the match but barely reacted to Cora Jade’s hot tag. The finish was good with Roxanne getting the victory for the team.

Joe Gacy and the Dyad challenge the Diamond Mine to prove they are a family.

Nikkita Lyons says her eyes on Mandy Rose, before Mandy Rose challenges her to a match.

SQUASH Ikemen Jiro Vs Giovanni Vinci: There were some hot moments but it was too short of a match to rate with Giovanni getting the quick win.

Results: Giovanni Vinci by Pinfall via Sit Out Last Ride.

Grayson Waller gets some autographed merch from Carmelo Hayes.

GOOD NXT Uk Tag Champs Josh Briggs and Brooks Jensen Return: The boys and Fallon Henley made it to the ring and were serenaded with you deserve it chants. Briggs says they brought the fight to the boys in the UK, with the crowd chanting USA. Brooks thanks Briggs for being his mentor. A second you deserve it chant was started in the middle of it as well. Fallon announces its time to drink some beer before former champions Pretty Deadly interrupted. Pretty Deadly accuse Josh and Brooks of lowering the prestige of the championships. Pretty Deadly were attacked and removed from the ring by Josh, Brooks and Fallon. Fun/enjoyable segment.

ABOVE AVERAGE Indi Hartwell Vs Kiana James: This was a short but very even match. Nothing was truly wrong with the in ring action between girls. Shocked that Indi Hartwell took the loss and I am curious to see what her direction is.

Results: Kiana James by Pinfall via Rope Assisted Roll Up.

Tony D’Angelo predicted that Troy Two Dimes Donovan was sleeping with the fishes.

Wes Lee challenges Trick Williams to a match next week.

GOOD Diamond Mine, The Creed Brothers and Roderick Strong with Damon Kemp and Ivy Nile Vs Joe Gacy and The Dyad: Match started off a little slow but when Joe Gacy preached his message they were able to get in control. One of the Creeds got a gorgeous deadlift suplex from a seated position that caused all 4 non legal men to enter the ring. The Diamond Mine stood tall before the commercial. Roderick took the hot tag and made the creed brothers mad. Brutus took a hit for Roderick before The Creed brothers left Roderick to get pinned by the Dyad.

Results: The Dyad by Pinfall via Assisted High DDT

Carmelo Hayes Vs Grayson Waller for the championship was made official for the Great American Bash.

Alba Fyre is announced as injured for an undisclosed amount of time.

SQUASH Sanga Vs Xyon Quinn: For a bit of the beginning it started off equal but it turned into Xyon Quinn being beaten by Sanga.

Results: Sanga by Pinfall via Chokeslam

Tiffany Stratton Vs Wendy Choo is made official for next week.

GOOD Mandy Rose with Toxic Attraction Vs Nikkita Lyons: Overall this was a pretty solid match between both women that ended in a Disqualification. The match was a more solid match than the opening tag match but this had the odd ending. Mandy continues to look really good as the top champion in NXT. Nikkita gets attacked by Gigi and Jacy before Cora/Roxanne make the save.

Results: Nikkita Lyons by DQ via Gigi and Jacy Interfering.

JD McDONAGH claims to be the necessary evil that NXT US needs and is not just the UK Ace.

AMAZING Bron Breakker and Cameron Grimes Face to Face: Bron Breakker is the clear fan favourite, as Cameron Grimes is losing the support of the crowd. Bron and Cameron had an awesome war of words that ended with Cameron throwing Bron into the corner turnbuckle twice with the turnbuckle breaking off. The scene to close the show with Cameron yelling at the officials to make sure Bron is okay was perfect and actually makes me want to see Cameron steal the victory.

Overall NXT prepared their audience in a fairly good way for the Great American Bash. Tension in the Diamond Mine continued to evolve, Bron Breakker nearly had his shoulder separated and Nikkita Lyons was able to make a somewhat successful return to the ring. Kiana James stole the victory and got an upset on Indi Hartwell. Pretty Deadly and the Pretty-Rowdy Bros, Briggs and Jensen are on a collision course for the UK Tag Team championships.