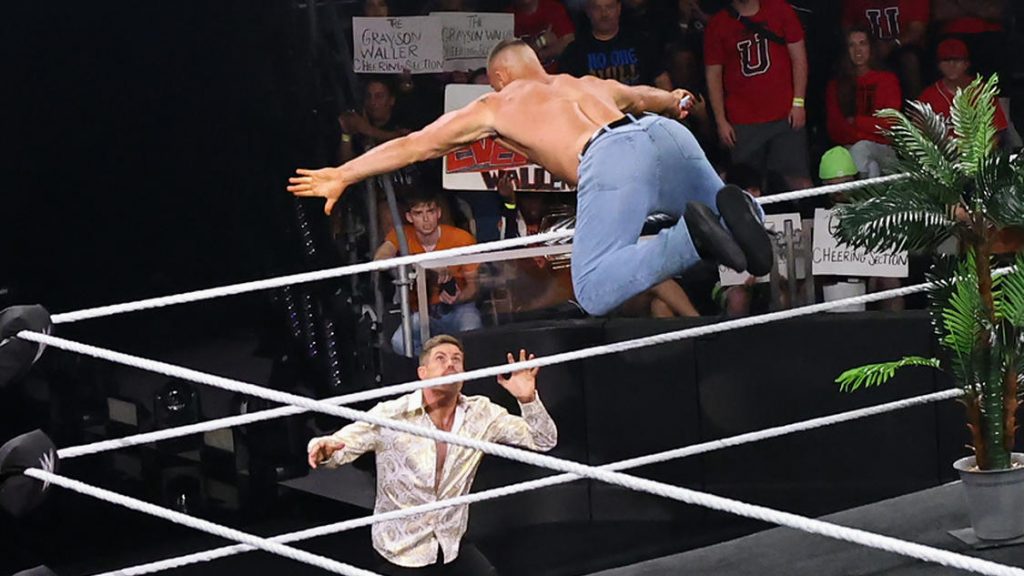 The in ring action was missing something. Apollo and Carmelo was fun and so was Alba Vs Isla. Other than that, the rest of the matches were squash matches. The storylines were advanced with the main segment being the Waller Effect. The crowd was somewhat basic and have been hotter on past NXT’s.

New Year, First NXT days away before their annual New Year’s Evil. With the same Grayson Waller Effect and Apollo Crews being a gatekeeper to the main event. Axiom looks for revenge against “Trick Willy.” And Isla Dawn looks to continue to torment Alba Fyre in the extreme resolution match.

Great Promo Package showing the year’s events for the brand.

Crews gets the early advantage with a dropkick but Carmelo gets the springboard clothesline. Apollo gets a lengthy stalling suplex before hitting a slingshot senton. Using the strength advantage with multiple german suplexes and a belly to belly, Apollo gets a standing moonsault to the outside on Melo before commercial. Carmelo gets a sickening stomp to Apollo’s new to capitalize once back from the break. Apollo gets a nice pump kick and clothesline combo. Crews continues to sell the knee but gets a nice superplex. Hayes counters a suplex with the suplex cutter after a pump kick. Carmelo takes a great blockbuster from Apollo as they both crawl to their feet. Apollo Crews goes on a roll before having his standing moonsault countered with Melo getting the codebreaker and diving leg drop for the win. Solid finish with Carmelo and Apollo looking good both ways. Axiom hits a cross body to both before hitting the moonsault

There isn’t a match where he always looks good and everything he does in the ring is polished. Axiom takes the victory with ease before Carmelo Hayes and Trick attack him. Apollo runs back down and makes the save.

Schism makes a challenge to the New Day.

DIjak tells Channing Lorenzo that he is the face of fear after the night he abducted him.

Andre Chase talks to Drew Gulak about Charlie Dempsey not being able to wrestle.

DIJAK wins with ease. Tony D’Angelo stands up for his associate before challenging DIJAK for next week.

Results: DIJAK by Pinfall via Feast Your Eyes

ABOVE AVERAGE Toxic Attraction In The Ring:

Jacy continues to allude to Toxic Attraction rebuilding their empire as they target Roxanne. Indi Hartwell, Cora Jade, Nikkita Lyons, Zoey Stark and Wendy Choo appear in the crowd before a brawl ensues with more of the winners roster. Roanne Perez announces from the platform that next week a 20 woman battle royal will determine her Vengeance Day contender.

A lengthy brawl happens in the back with Isla taking a fall onto some chairs. Alba struggles to bring Isla to the ring before they eventually do and start the match. Isla targets the hand of ALba by stomping on it. They go to the commercial after Fyre was taken off the top rope by a chair being tossed into her face. Dawn hits her meteora on the outside in the break as she is in control of Alba. Alba gets her fingers shut in a red toolbox before she sets up for the swanton through a set up table. The table fails to break after the Swanton as Alba puts her through the table with a gory bomb. Fyre gets the win after rolling Isla into the ring. This was a fun and enjoyable street fight like match.

Results: Alba Fyre by Pinfall via Gory Bomb Through The Table

Javi dominates the first moments of the match before Oro takes control. Oro gets an exploder suplex before hitting a running spinning heel kick to the corner.

Results: Oro Mensah by Pinfall via Spinning Heel Kick In The Corner

Brooks Jensen and Kiana James seem to have something brewing as Kiana tells Brooks to text her later.

Another short technical match that had Drew continue the submission hold.

Fun match that had The Schism use shenanigans. Woods distracts the Dyad before Kofi hits a dive to them. Kofi reverses a uranage before being getting the win with Trouble In Paradise.

Results: Kofi Kingston by Pinfall via Trouble In Paradise

Grayson and Bron have a talk that resulted in Grayson trying to call him a Rick Steiner rip off. Bron punches Waller before hitting him with a punch. Bron attacks him including doing a tope onto Grayson Waller with Grayson’s phone in hand.

The in ring action was missing something. Apollo and Carmelo was fun and so was Alba Vs Isla. Other than that, the rest of the matches were squash matches. The storylines were advanced with the main segment being the Waller Effect. The crowd was somewhat basic and have been hotter on past NXT’s.