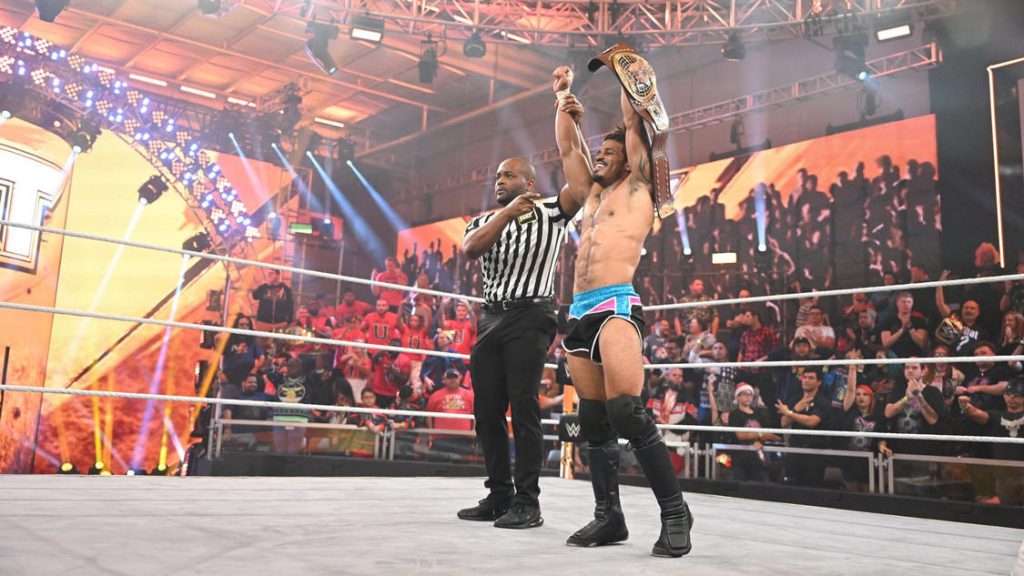 The opening contest was the peak of this show but the rest was good. Nothing stood out but the show was fine. Enough stories were advanced throughout the show but this is a very basic weekly show.

Shawn Michaels’ NXT looks to finish off the chaotic year with a bang. JD McDonagh collides with Julius Creed. Wendy Choo and Cora Jade have a grudge match. The Schism will face the trio of Malik Blade, Edris Enofe and Odyssey Jones. The Battle Of The Bar commences as Fallon Henley looks to defend her family bar against Kiana James. Tony D’Angelo gets his North American Championship match against Wes Lee.

This match excels with JD working on Julius’ arm and overall being the more experienced. There were some good spots with Julius hitting the lucha like springboard for the arm drag. A great combo in the jumping knee and the Spanish fly from McDonagh. After the match Veer Mahaan challenges the Creed Brothers for New Year’s Evil.

The beginning is fire because we have seen Wendy Choo grow into this angry woman. So with Wendy not even doing her entrance and running right into the ring it shows the tension. The match continued to go with Cora just being the bully. Having multiple instances of laughing at Wendy. The in-ring action was good and the crowd continued to show hate towards Cora. Wendy gets the victory with a full nelson slam and diving splash.

Two athletic guys in the ring together in a short match. SCRYPTS got the win but the character is not doing him any favors.

This was Lyra’s second match but she the diving splash did not look good. Lash is getting good in the ring.

This was a fun match with the Schism getting some great spots. Ava doing stuff with Booker was interesting and ultimately the finish made The Schism look awesome. The Schism is very underrated and all three guys are great workers.

Results: The Schism by Pinfall via Double Codebreaker and Upside Down Clothesline Combo

GOOD Fallon Henley Vs Kiana James – Battle For The Bar:

This was a good match, the story from a writing standpoint is interesting. There is probably more to come based on how Brooks reacted to Fallon winning.

After working with some in ring talent and trainees at the performance center. Gulak grapples and ends up tapping out multiple of the people he brought. Drew was directing his lesson to Hank Walker. With each trainee, Gulak had to work harder to get a submission in. Miles Borne was able to take down Gulak as he used to Gulock. Charlie Dempsey came out, challenging Drew to give a run for his money. Dempsey further challenges Hank for a match next week. This was slightly reminiscent of the Samoa Joe and Bryan Danielson segment of elevating submissions together.

Overall I think this match went longer than it needed to. There was some good stuff with Tony working on Wes Lee’s leg. Wes was selling greatly in the match but this match was dragging. The finish was fine with Dijak abducting Channing Lorenzo. Dijak shows he is all about justice in all forms. Allowing Wes Lee to capitalize for the victory.

The opening contest was the peak of this show but the rest was good. Nothing stood out but the show was fine. Enough stories were advanced throughout the show but this is a very basic weekly show.