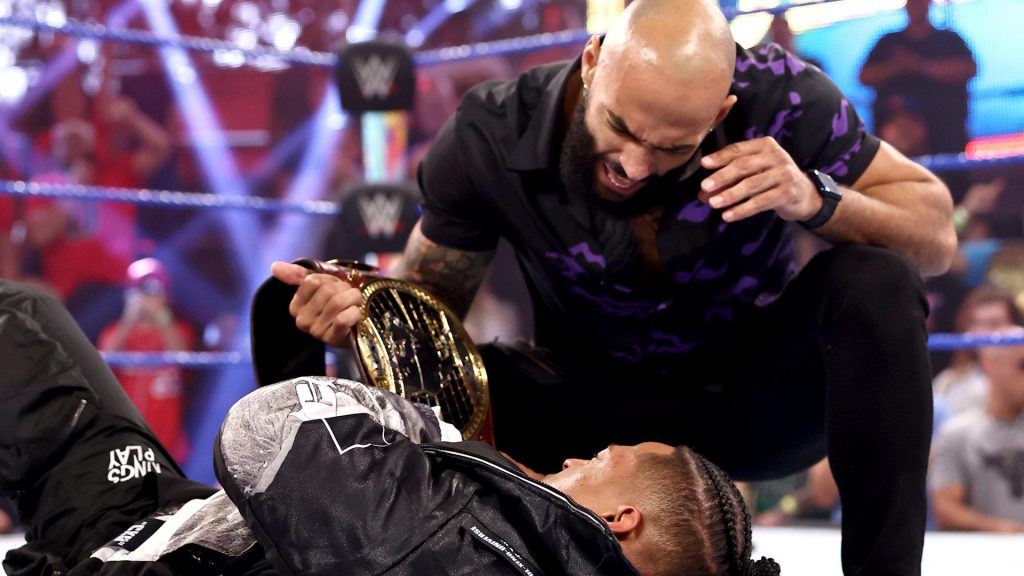 NXT further built up to the Worlds Collide event in what could only be described as a toast to NXT’s past. We saw nine stars of NXT past, Finn Balor, Rhea Ripley, Ciampa, Gunther, Doudrop, Nikki ASH, Ricochet, Shayna Baszler, Butch. These stars contributed to the build of the unification matches including Ricochet challenging Carmelo Hayes. The biggest high point of this NXT was the storytelling with seeing all of the past faces and everything done in the show made me as a viewer excited for Worlds Collide. The matches were alright with nothing being great or amazing but the atmosphere and excitement are those high points of this show.

As he was about to talk, Apollo Crews stopped Grayson from talking on the mic. Crews takes early control of the match as he gets a nice dropkick. In a mocking attempt, Apollo does the jumping lunges that Waller does. Getting a long stalling suplex on Grayson before hitting a slingshot senton. Before the break, Grayson gets an inadvertent eye poke causing doctors to come down to check on Apollo. Waller works on Apollo with a headlock as Crews tries to fight back. Apollo fights back getting a jumping clothesline and kip-up, he then gets a blockbuster for a nearfall. Grayson counters a military press before getting the rolling stunner with an eye poke for the victory. Solid and fun match to start it off, with the crowd being hot.

Meiko Satomura claims Blair and Mandy will not get past the Final Boss.

Finn Balor tells Bron Breakker not to underestimate the moment or the opponent at Worlds Collide.

ABOVE AVERAGE Tatum Paxley and Ivy Nile Vs Katana Chance and Kayden Carter:

Kayden takes control of Ivy, getting an assisted dropkick on Ivy. Paxley is tagged in as they get some tandem offense on Carter. Tatum sported a similar mask to Ridge Holland when his nose was broken. Carter gets control of Tatum with a springboard dropkick. Katana is tagged in getting a slingshot senton, Tatum overpowers her before they collide with a double clothesline. Gigi Dolin and Jacy Jayne distract Ivy and allow Katana and Kayden to get the win with the 450 splash and neckbreaker combo. Short back and forth type match.

Results: Katana Chance by Pinfall via 450 Splash and Neckbreaker

Katana and Kayden announce they are ready for a parking lot party on Sunday for Worlds Collide. Doudrop and Nikki ASH come out and challenge them for a match at Worlds Collide.

Kiana James goes on to trash talk Zoey Stark before their match later tonight. Saying Zoey overpromising and under delivers.

Joe Gacy gives The Dyad smiley face buttons for their victory last week. Cameron Grimes says he has an answer for Gacy and says he doesn’t need the Schism. Gacy accuses Cameron of being lonely after all of his losses this year. Joe says Cameron is spending another lonely night without a championship, a family and a father. Cameron would then attack The Dyad before Gacy could lay out Grimes he hugs the man. Solid promo from all parties involved, with Gacy’s line being a great line about Grimes’ father.

Roxanne Perez describes her feelings of heartbreak when Cora underwent the changes that occurred. Roxanne blocks Cora on her phone and says their friendship is over but their rivalry is not.

Fallon and Lash Legend start the match as Kit Wilson tags himself in. Josh Briggs meets Kit in the ring using his power. Brooks, Briggs and Henley take control, sending Fallon out of the ring with an assisted dive. Prince and Wilson use their tag psychology to take control of Josh, working him down. Jensen gets the hot tag and takes control of Elton. Joe Coffey uses the NXT UK title to help Pretty Deadly get the victory.

Shayna Baszler tells Mandy Rose she better unify the championships to make sure her words of the last year aren’t garbage.

JD McDonagh says he would rather be creepy instead of emotionally fragile like Wes Lee.

ABOVE AVERAGE Andre Chase with Bodhi Hayward and Thea Hail Vs Charlie Dempsey:

Technically solid match that had Bodhi Hayward be the unintentional distraction for Charlie. Charlie came back into the ring and got rolled up by Andre Chase.

Results: Andre Chase by Pinfall via Leg Trap Roll Up

Gunther reminds Tyler Bate about the legacy of the NXT Uk Championship.

Nathan Frazier and AXIOM organize a two out of three falls match.

GOOD Gallus Vs Diamond Mine:

Overall a fun and enjoyable match. Roderick Strong has his phone and distracts Damon Kemp. Kemp goes back into the ring and the numbers game causes him to lose to Gallus. Pretty Deadly, Briggs and Jensen come out and an all out brawl commences with Security trying to stop the brawl.

Carmelo says how he is not going to defend the championship. Ricochet returns to NXT being serenaded with Welcome back chants. He tells Carmelo and Trick to shut up and says how Worlds Collide shouldn’t just be NXT. Ricochet claims he wants to give Carmelo a championship match people will remember. Trick gets kicked and Carmelo gets caught with the Recoil. Ricochet stands tall with the NXT North American Championship to close the show.

NXT further built up to the Worlds Collide event in what could only be described as a toast to NXT’s past. We saw nine stars of NXT past, Finn Balor, Rhea Ripley, Ciampa, Gunther, Doudrop, Nikki ASH, Ricochet, Shayna Baszler, Butch. These stars contributed to the build of the unification matches including Ricochet challenging Carmelo Hayes. The biggest high point of this NXT was the storytelling with seeing all of the past faces and everything done in the show made me as a viewer excited for Worlds Collide. The matches were alright with nothing being great or amazing but the atmosphere and excitement are those high points of this show.