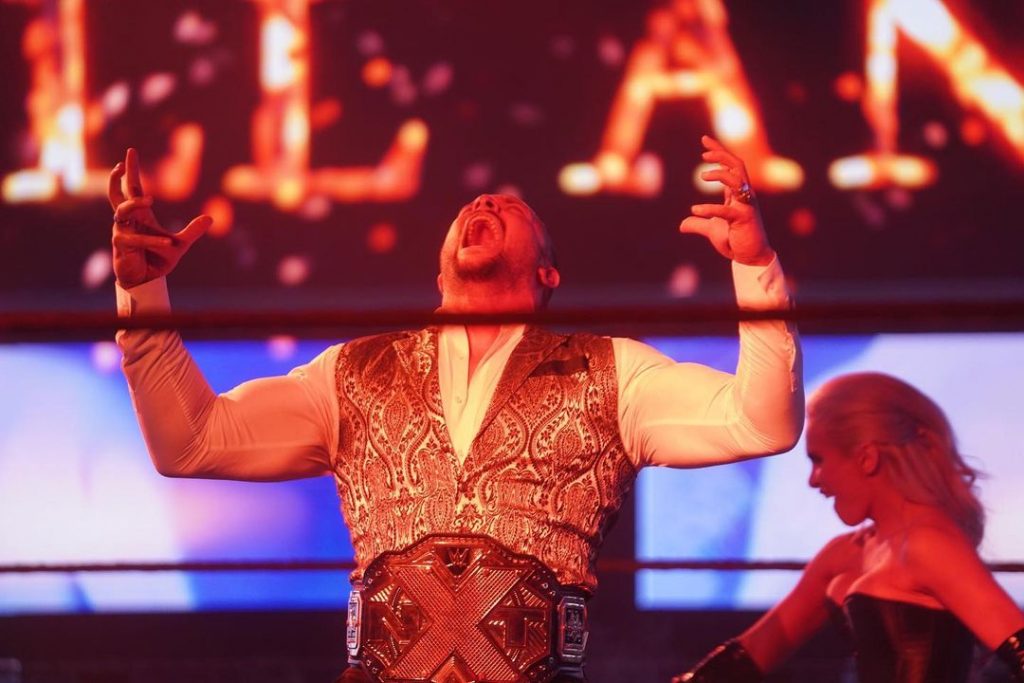 After a decent episode of NXT last week, they’ve prepared with some fire this week, because NXT this week was featured with a couple of matches with stipulation. Leon Ruff & Isaiah “Swerve” Scott will end their rivalry together with a falls count anywhere match. The Way is also ready to become the NXT Women’s tag team champion before even facing Shotzi Blackheart & Ember Moon.

MUST WATCH: NXT started with a falls count anywhere match between Leon Ruff & Isaiah “Swerve” Scott. This match started quickly where both competitors gave their best to pin each other in the ring. Both wrestlers then went outside of the ring gave so many heavy spots to impressed the fans. The spinning cutter by Leon Ruff on the outside was the highlight of the match. The match ended after new WWE Signings, AJ Francis, threw Ruff over the barricade, resulting in Scott hitting Ruff with the JML Driver, for the win.

GREAT: Johnny Gargano & Austin Theory were walking to William Regal’s office but found out that Regal was having a business with Scarlett. Austin Theory then talked about how big Scarlett’s nails are even tho Theory was not really going to say that. After that happened, Gargano complained about getting a match with Bronson Reed but Regal said that the match is still going to happen soon. Regal also said that Austin Theory will have a match with Karrion Kross next week.

GOOD: Cameron Grimes was backstage celebrating when Ever-Rise congratulate him. Grimes said that he loves their show but they need Cameron Grimes to make it interesting. Grimes then said that he’s going to VIP Room and walked off. Grimes was about to go to the VIP Room but was interrupted by Ted Dibiase. Dibiase said that he bought the place that Grimes wanted to go in and laughed leaving Grimes alone outside.

GREAT: Timothy Thatcher & Tommaso Ciampa beat Grizzled Young Veterans in a brutal tag team match. Ciampa & Thatcher continued to show their tag team chemistry after going over in this match. Grizzled Young Veterans also didn’t look weak cause both of them were dominating the match. The match ended where Thatcher hit Zack Gibson with an actual boot and finished it by making Gibson tapped out to the Fujiwara Armbar.

MUST WATCH: The NXT Champion, Karrion Kross then made his entrance with Scarlett. Kross gave an awesome babyface promo and willing to drop Austin Theory on his head and leave him unconscious. Kool Kyle O’Reilly then came out and said that he agrees with Kross because he’s dominant, and everyone is afraid of him, but not Kyle O’Reilly. Pete Dunne interrupted the scene and said that he wants to prove to both Kross & O’Reilly that he’s the baddest man in NXT. Dunne also said that he doesn’t care about the new look of Kyle O’Reilly. Finn Balor then came out and said that he already beat Dunne & O’Reilly twice. Balor then punched Kross but the champion instantly dropped Balor to the floor. Kross dominated the ring by attacking O’Reilly, Dunne, and Balor. The security tried to separate Kross but he ended up getting slammed by Kross. Johnny Gargano & Austin Theory then attacked Karrion Kross. Gargano hit Kross with his title laying the NXT Champion unconscious while THE WAY left him on the ring with Scarlett

GOOD SQUASH: Another squash match was happened when Sarray defeated Zayda Ramier after Sarray gave a brutal exploder to finished the match. The problem with this match was both of the competitors were not having a good chemistry together.

GOOD SQUASH: LA Knight defeated Jake Atlas in a quick match. Jake Atlas gave so many offense to LA Knight but Atlas can’t face the Fact of Life and ended being pinned by LA Knight.

GOOD: Legado del Fantasma gave a really good promo talking about last week, Legado del Fantasma witnessed a premonition when they beat Kushida & MSK. Joaquin Wilde & Raul Mendoza step up and said that they’re coming for the Tag Team titles. KUSHIDA appeared on the big screen and said that last week was a mistake. Next week, Kushida will once again fight Santos Escobar in a 2 out of 3 falls match.

GREAT: Raquel Gonzalez & Mercedez Martinez gave an awesome interview backstage. They had a war of words together ahead of their NXT Women’s Championship Match next week. Martinez warned that she will end Gonzalez’s title reign next week, but Gonzalez corrected her words and said that Martinez will merely be the first in a long-line of challengers.

MUST WATCH: Candice Lerae & Indi Hartwell became the NXT Women’s Tag Team champions after they defeated Ember Moon & Shotzi Blackheart in an awesome street fight match. Both teams gave their best to make a gigantic street fight together. Shotzi Blackheart was the MVP of this match after she gave so many scary spots to The Way.

NXT this week was the best episode since the fallout of the takeover. This episode gave so many awesome storylines and a couple of awesome matches. Kross proved himself that he’s a dominant NXT Champion and he’s ready to fight the world. The Women’s Division in NXT was also keeps getting better after we see some heat in the feuds and a perfect ending in their Women’s Tag Division.