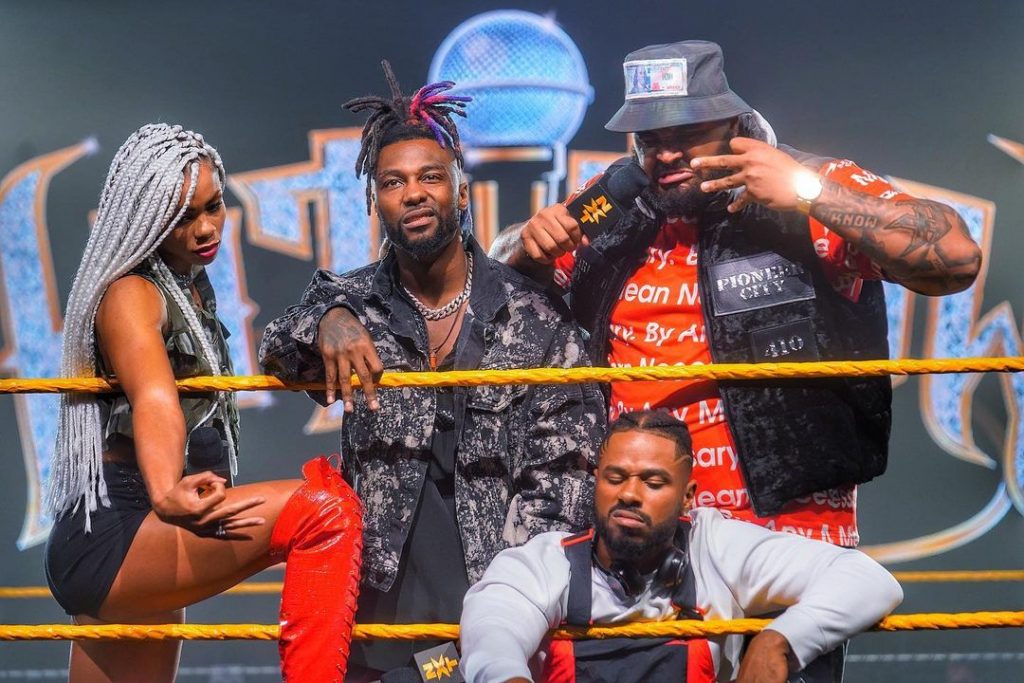 A championship night is here for NXT! This week’s NXT featured two gigantic championship matches. Raquel Gonzalez & KUSHIDA had to defend their titles facing their biggest enemies in NXT. A couple champions were having non title matches too against various opponents. This episode also mark the start of the build to NXT Takeover: In Your House II.

GOOD: NXT started with The Doomsday and the current NXT Champion, Karrion Kross, facing one of the members of THE WAY, Austin Theory. This match overall was good and I thought the match was going to be a complete squash, but Theory got a couple of offenses to Kross. The match ended with Kross delivered the Kross Jacket to Theory in front of Johnny Gargano.

GOOD: After the match ended, the camera was looking at Karrion Kross posing with his NXT Title before it panned out to Finn Balor. Finn Balor was behind Karrion Kross all along. Balor wanted a rematch with Kross instantly accepted the match and it’s going to happen in two weeks.

GOOD: Up next, we got a non title tag team action between MSK & Breezango. This was such a fun tag team match between two of the most over tag teams in NXT. The referee spot was amazing and it made the match even more interesting. MSK defeated Breezango with their tag finisher. Both teams gave respect to each other after the match ended.

MUST WATCH: Isaiah “Swerve” Scott introduced his new spooky family to the NXT Universe. They called “The Hits Row Records”. They came out with an awesome hiphop theme to the ring and they were ready to introduce themselves to the crowd. Swerve said that he’s in the dangerous mode and he said that he’s disrespectful. Swerve introduced The Top Dolla, AJ Francis. Aj Francis gave an amazing introduction to the universe with some flow and bars. Brianna Brandy than flexed that she was better than everybody in the world. Isaiah “Swerve” Scott said that the universe might now know about Hit Row Records before, and now they know! Such an interesting way to introduce this faction by these four amazing people.

GREAT: Another funny Cameron Grimes segment is in the books when Grimes when to an auction hall. Grimes had a bid war with Ted Dibiase. Unfortunately for Grimes, Ted Dibiase continued to beat Grimes by Outbids Grimes offer. This feud between Grimes & Dibiase has been an amazing addition to NXT. This was always a feel good moment and a funny way to keep the viewers tune in to NXT.

GOOD: After the match ended, Oney Lorcan & Pete Dunne attacked Kyle O’Reilly before Bobby Fish made his return and saved O’Reilly. Bobby Fish & Kyle O’Reilly had a little conversation at the end. Fish said that he has a score to settle.

MUST WATCH: In the main event of the evening, we got a cruiserweight title match between KUSHIDA & Santos Escobar. This match started in a fast paced action where MSK came outta nowhere to attack Legado del Fantasma. The action continued between these two competitors with Santos Escobar picked up his first fall after he delivered the Phantom Driver to KUSHIDA. The picture in picture commercial was about to came out but Kushida locked Santos Escobar in an armbar and the commentary went crazy that they stopped the commercial being played. There was a couple of amazing sequence in this match leading up to the ending. KUSHIDA picked up the win after he used the northern lights suplex to retained his title.

This week’s episode of NXT ended up being better than expected. All of the matches in this show were atleast good and the two championship matches were amazing. They continued to stack the show with so many quality storylines in the making. NXT’s decision to put the cruiserweight title match in the main event was perfect. It made the Cruiserweight Title looks more prestigious than ever. With that being said, NXT continued to deliver their shows without any hesitation of competition.