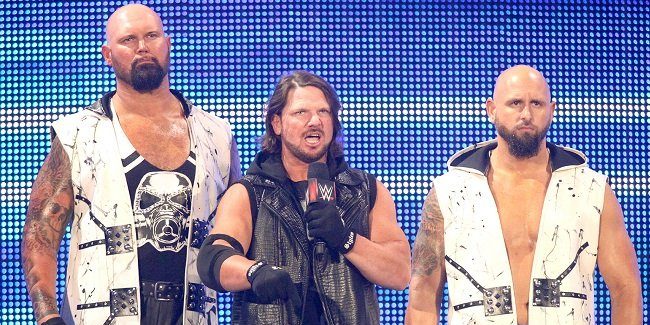 Doc Gallows has revealed more behind The Club (Karl Anderson & AJ Styles) being split up due to the 2016 draft, as well as each members reaction to the split.

Recently, Gallows was interviewed on the Generation of Wrestling podcast, were he would delve into the origins of the Talk ‘N Shop PPV, Vince’s opinion of a WWE style Bullet Club and The Club being split up in the 2016 draft.

First, Gallows would talk about the origins of Talk ‘N Shop PPV:

“We got fired after being in a WrestleMania main event. I’m like, Karl is pissed off. I’ve been through this before. I go, ‘How do we not parody this? We have to spoof it. That’s the reaction. We have to make fun out of everything that they’ve been doing.” I came up with Talk ‘N Shop. We put it up on PPV, and it was a hit, and now it’s a thing. It was a weird blessing for wrestling in a lot of ways.”

Secondly, Gallows would discuss if doing Bullet Club in WWE was discussed:

“Not to my knowledge. We always thought they should have done it and they should have done it right away when we came in. Then the further you got away from it, you know, they put us with Finn for a little bit on RAW, but we weren’t on any show with him very much at all other than that couple months on RAW. I mean, he was there. We were on SmackDown at one point, then he was back in NXT. We were with AJ a lot.”

Finally, the split of The Club in 2016 was discussed with Gallows:

“We did The Club with AJ. When they split The Club up, they didn’t tell AJ or us so he was really pissed off and we went to the other show. I feel like the reason why they did the O.C. thing was because we were going to leave and go to AEW. Our contracts were up in September 2019. It was no secret we had buddies over there. We had a very nice offer to go over there. They were trying to keep us and make us happy and AJ wanted us to stay because he wanted to keep his buddies around. We’re both Atlanta guys. We hung out together and he wanted us to stay. I think that was not only the money they kept upping to get us to stay, but I think that getting creative and putting the OC together was what they thought would make us happy and be a reason to keep us around, and then ultimately, you saw how that worked out.”