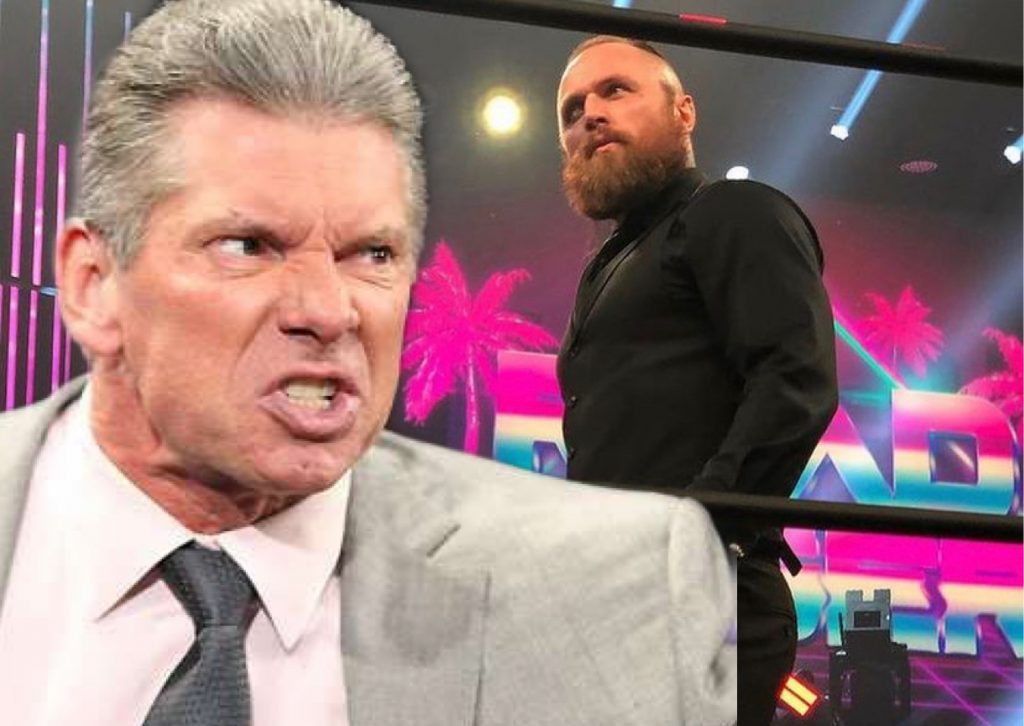 In today’s special Saturday edition of the Rasslin Roundup, WWE didn’t realise Black had a 30 day no compete clause, and thought it was another talent who did, Paul Heyman has announced an upcoming WWE documentary, Buddy Murphy has reacted to his WWE release, AJ Styles has responded to criticism over recent booking, Kurt Angle has claimed he would ‘do the job’ for a female star, and and Impact Star has said he wants to ‘beat the f**k’ out of Jon Moxley.

The ‘special advisor’ to the current Universal Champion Roman Reigns, Paul Heyman, has announced via Twitter that WWE are currently filming a documentary on WrestleMania 37.

The show saw Roman Reigns retain his universal championship by pinning both Daniel Bryan and Edge.

Heyman took to Twitter to say Shooting a ‘@WWE @WWENetwork documentary for @peacockTV on #WrestleMania 37, which turned out to be the Showcase for ONE Immortal … the #TribalChief who scored the most declaratively dominant pinfall in the history of #WrestleMania main events …. @WWERomanReigns!’

Shooting a @WWE @WWENetwork documentary for @peacockTV on #WrestleMania 37, which turned out to be the Showcase for ONE Immortal … the #TribalChief who scored the most declaratively dominant pinfall in the history of #WrestleMania main events …. @WWERomanReigns! pic.twitter.com/CiMvOeRsLG

Buddy Murphy sat down for an interview with Sean Ross Sapp of Fightful this past week, where he opened up about how he found out about his WWE release, and how he feels about it.

Murphy revealed “When I got the call, I had a feeling and was on my way to the Performance Center because I had to go and get something printed out. In today’s (age), who has an actual printer? My phone rings and it says ‘WWE Inc.’ I knew, so I didn’t answer. I went in and got my things printed. Obviously, I knew it was coming because I put across that I was unhappy. Without overly stepping on toes, I made it quite apparant that I wanted to do more and where I currently was didn’t sit well with me. Got my thing printed off, gave the call back, they informed me that they were going to release me and I had always heard rumblings that once that day comes, and it comes for everyone. Everyone is going to get that call one day. They would always say that this weight would get lifted off your shoulders. There are two things in my life, which people have said, which are very curious. They say, ‘once you have a child, it’s a love that you can’t explain’ and ‘when you get fired from WWE, it’s this crazy weight lifted off.’ Those were two things that I was curious to see what people were talking about. One just happened before the other. It was a literal weight coming off and I felt free. My main concern was what would happen with my visa situation. I didn’t care about the wrestling. Like I said, I wasn’t overly happy there, just sitting in the back and not being utilized, but I’ve built a life [in America]. I have animals and a house. I’ve spent a quarter of my life in the US. That was my main concern because I think I have a strong belief that I have something to offer and will land on my feet. That is what I was mainly focused on. Once a couple of days passed, I embraced it and was excited with different projects to dip my foot in. It’s a weird and unique situation. As well as getting punched in the stomach, it was a massive shock, but also a breath of fresh air”

When AJ Styles debuted in WWE back in 2016, he was almost instantly given a main event push which resulted in him carrying the WWE championship for over a year on the SmackDown brand. However over the past year Styles’s push has slowed down significantly and he has been competing in an around the mid card.

With that said, AJ Styles is currently one half of the Raw tag team champions along with Omos.

Many fans have criticised the booking of AJ Styles over the past year, with one Twitter user tweeting out ‘Back when AJ Styles was used properly…’ in reply to a tweet by WWE on Fox.

Back when AJ Styles was used properly…

AJ Styles responded to this tweet saying that he appreciated how he was made into a star when he arrived in WWE, but now it’s his time to make other wrestlers stars.

Styles tweeted ‘I appreciate how I was used. I was made into a star. Now it’s my time to be what is needed and in the process make other stars. My time will come.’

I appreciate how I was used. I was made into a star. Now it’s my time to be what is needed and in the process make other stars. My time will come. https://t.co/jYEAUeGmb6

3. Karl Anderson Wants To Beat The F**k Out Of Jon Moxley

Ahead of his his United States IWGP Heavyweight championship match against Jon Moxley on next weeks edition of AEW Dynamite, Impact Wrestling star Karl Anderson has made the claim that he will beat the ‘F*ck’ out of Moxley.

Anderson tweeted “I’m serious. I’m gonna beat the fuck out of #JonMoxley next Wednesday on Dynamite. What the fuck do I have to lose? Nothing. New York n Michael Hayes attempted to bury me, didn’t work.. I’m already a #Legend , #G1Final2012 @njpw1972 Let’s fuckin Go @AEW @IMPACTWRESTLING”

I’m serious.
I’m gonna beat the fuck out of #JonMoxley next Wednesday on Dynamite.
What the fuck do I have to lose? Nothing.
New York n Michael Hayes attempted to bury me, didn’t work..
I’m already a #Legend , #G1Final2012 @njpw1972
Let’s fuckin Go @AEW @IMPACTWRESTLING

2. WWE Thought They Forgot To Give Murphy A 90 Day No Compete Clause

This past week on AEW Dynamite, former WWE star Aleister Black made his debut for the promotion, despite the event being just over 30 days after he was released from WWE. In the following days multiple reports came out revealing that WWE actually forgot to update Black’s no compete clause from 30 days to 90.

In an interview with Fightful, former WWE star Buddy Murphy revealed that WWE thought that he was the one without a 90 day no compete clause.

Murphy revealed “I received a phone call from the office the day after I was released saying that they received an email that they messed up and my contract was only 30-day non-compete and that if I wanted to prolong it to the 90 days that they would do that for me. I thought that was weird as I was a budget cut, but you’re still willing to pay me another two months, but it wasn’t me. I had my letter, which says ‘August 31.’ August 31 is my day. When it comes to the visa situation, the more time I have, the better so I can get prepared. Even if they gave me an out, I would have to take it for my life. They thought it was me (who had a 30-day non-compete). I informed them that it wasn’t because I received a letter with (August 31). It turned to relief. It went from panic to relief on the voice (on the phone call). Then they moved on. I think they panicked and obviously they got the name mixed up. It was someone, but it wasn’t me. Maybe Buddy and Aleister got mixed up. Buddy or Black, they are both B’s. They called me, not me. You hear all the things like the trash bag thing and I’m a pretty open-minded person and don’t get affected by it. I try and see both sides of the story. I don’t think there was any malice behind the garbage bag, but it’s not a good look, I get it. Do I believe there was actual malice to upset (talent)? No, I don’t. Definitely a shitty thing to do once you’ve been released and your life is being changed.“

1.Kurt Angle Claims He Would Do The Job For A Female Star

Kurt Angle was recently a guest on Grilling JR where he was asked if he would ever ‘do the job’ to a female star in wrestling.

For those unaware, ‘doing the job’ is wrestling terminology for losing to your opponent and putting them ‘over’ in the process.

Angle replied saying “Yes, I would, especially someone like Chyna or even Charlotte Flair,” Angle said. “She’s got so much success, you could pin her up against any male today. She’s somebody that I would probably do a job for. Ric was a great athlete but not nearly as athletic as Charlotte. She is incredible, especially for her height. She’s not a stocky girl, she’s pretty tall.” (H/T WrestlingInc)