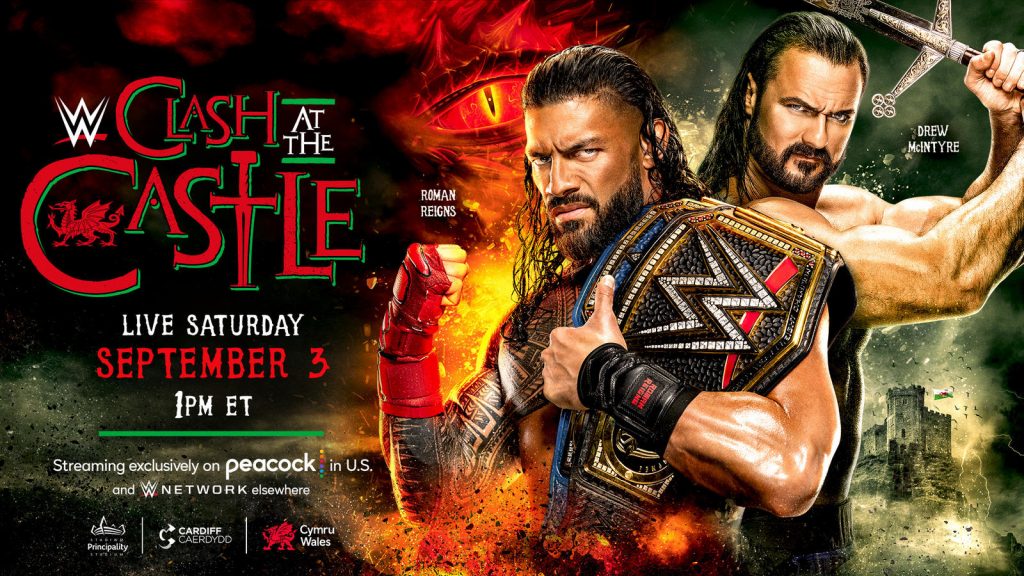 WWE Clash At The Castle has been awarded as the Special Event of the Year by the Wrestling Republic Voting committee.

Special event of the year went to the show that had: the best matches, atmosphere, enjoying moments and from top to bottom was the best show of the year. The Special Event of the year was given to what the voter thought had a magical feeling towards it.

Clash At The Castle (Our Review is linked) had received 9 out of 17 votes.

Wrestlemania Night One received the second most votes in 4.

WrestleMania Night Two, Summerslam, ROH Final Battle and Supercard of Honor, and Impact Wrestling’s Slammiversary were the other events on the ballet. These events didn’t get any votes.

Clash At The Castle:

“WWE Clash At The Castle was the best overall show of the year, it had two match of the year candidates in Gunther vs Sheamus and Roman Reigns vs Drew McIntyre. The show also had the best crowd of the year as well. “ – Archie Carter (News & Opinion Writer)

“As Excalibur says: “you have got to give the people what they want” and with this PPV, fans got that. Despite McIntyre losing to Roman Reigns, this match was one of several bangers on the night that also featured European talent. The other of course being Gunther vs. Sheamus. “ – Matt Cookson (Review Writer)

“A hot crowd, amazing production values, sensible booking and some amazing wrestling- what more could anyone ask for? Clash at the Castle was a wonderful afternoon/evening of wrestling entertainment, other than the ending, which, due to an unfortunate failure to switch off cameras, did somewhat sour it. “ – Ben Wagner (Opinion Writer & Lions Of The Republic Co-Host)

“WWE Clash At The Castle was the best show of the year for its importance and what it meant to return to the UK after many years. For its part, the billboard was attractive with fights that will be remembered for a long time.” – Gabriela Boteo (News Writer)

“The atmosphere, the stage, the matches, the debuts. In my opinion, HHH has YET to top this PLE since his takeover. such a great show. also I had the privilege of being there in person so that made it even easier picking this one.” – Chaos (Host of Take It To The Table)

“Clash at the Castle excelled in one thing, proving why European Crowds are phenomenal. From singing Seth’s music to Metalingus for Edge. Clash at the castle delivered instant classics and edge of your seat action. “– Coby Galenzoski (Head of Reviews & Co Host of Republic Ramble)

“While I do attempt to put aside my bias of having been at the show, WWE Clash At The Castle was my show of the year, followed by WM Night One. Clash featured several bangers, and featured one of the best WWE Crowds in years. “ – Ben Allison (Owner Of Wrestling Republic and Graphic Artist)

“First PPV since HHH took the reign, match after match had me on the edge of my seat. “ – Savannah Gall (Head Of Scouting Showcase & News Writer)

“This show had an insane amount of hype around it and it delivered. From Logan Paul showing the world he wasn’t just a typical celebrity wrestling and had talent for this business. Becky and Bianca delivering. Cody Rhodes making his anticipated return home and tearing the house down with Seth and finally Austin and Owens delivering too. The final WM under Vince McMahon delivered. “ – Anthony Ricciardi (Head Of Opinions)

“The first night of WM 38 delivered many emotional and iconic moments, such as the return of Cody Rhodes and Stone Cold Steve Austin’s first match in more than a decade. Due to the iconic moments it had, I consider WM38 to be the best event of the year. “ – Tomas Gramajo (News Writer)

“Wrestlemania night 1 was the best Premium Live Event of the year. The return of Cody Rhodes to WWE and Stone Cold Steve Austin’s perceived last match is enough to lock this in as the show of the year. If that wasn’t enough Bianca Bel-Air and Becky Lynch tore the house down in their title match. It also featured the debut of Logan Paul as an in-ring performer and he had proven to be a hot commodity. “ – Ignacio Pinalez (Opinion Writer & Take It To The Table Guest)

“With the ALL OUT incident, AEW needed to redeem itself and i think this was what it needed. Solid wrestling, solid storytelling, and it brushed off their ALL OUT burden and almost started a new chapter in AEW.” – Suki (Japanese News Writer & Lions Of The Republic Co-host)

“Top to bottom, the card was amazing. In my opinion, there wasn’t a bad match and watching Jamie Hayter and MJF win the titles added that little extra bit of sweetness. “ – Olivia Quinlan (Head Of News)

“AEW X NJPW Forbidden Door was the show of the year. Forbidden Door allowed wrestling fans to get a taste of a promotional crossover. Giving the fans a chance to see matches only once dreamt of. “ – Mark Mumby (News & Scouting Showcase Writer)

“The first wrestling show I attended live. What. A. F**king. Experience. This will be a memory I hold dear to me as a wrestling fan. From travelling to Orlando and surviving the intense heat, was all worth it. Revolution started the year hot for AEW. With great matches such as The Face of The Revolution Ladder Match, Jon Moxley vs Bryan Danielson, Adam Cole vs Hangman Page. However, the best match. Was easily, MJF vs CM Punk in a dog collar match. Two very similar men, beating the living shit out of each other. As their blood stained the mat, their souls laid bare for the fans to watch a fight of the ages. Revolution showed what AEW is. Fun, Entertaining and pure utter joy. “ – Soul (Host of Soul Sessions & Regular Guest on Take It To The Table)