Wrestling With Demons … AND A Broken Freakin’ Neck: A Kurt Angle Story 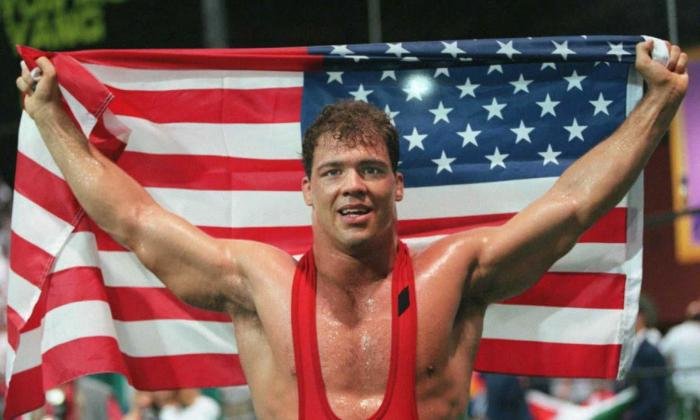 We’ve all heard the line “I won a gold medal with a broken freaking neck.” Kurt Angle would never fail to let you know about this. As long as you give him the chance, he’ll be in your ear to tell you. He has very good reason to do so.

Born as Kurt Angle in Pennsylvania, Kurt is an Olympic gold medalist, and former professional wrestler. Before his time in the squared circles of WWE, TNA, NJPW, and a few independents; Kurt Angle wrestled amateur wrestling throughout high school, and college. Angle would go undefeated in his freshman year of high school, and would make the cut for the state wrestling tournament by the time he was a sophomore. In his junior year, Angle would place third in the state tournament, but as a senior, Angle would win the whole tournament, and become champion.

Kurt would go on to college to continued success. In college, Kurt would become a two time NCAA Division 1 wrestling champion. When he graduated college, he wouldn’t give up wrestling. In fact, he took it to the next level. Kurt would prepare for the Olympics of 1996, often times training about ten hours a day. When participating in Olympic trials for the 1996 Olympics, Kurt would suffer his “broken freaking neck.” He would fracture two cervical vertebrae, herniate two discs, and pull four muscles. Still, he somehow managed to win in the trials, and qualify for the Olympics. For the next five months, Kurt would try to rehab his neck injuries. When it was time for the Olympics, Kurt was ready to go, with assistance from pain reducing injections to the neck. The rest was history. He’d go on to win the gold medal in his weight class, and become cemented in history.

Fast forward seven years, and Kurt Angle is in the main event of WrestleMania in 2003. Kurt was already five years into a WWE career, and had two WWE Championship reigns under his belt. He was in the midst of his third one, when he would enter WrestleMania 19 in 2003, as WWE Champion. Kurt defended the title against Brock Lesnar, who was that year’s Royal Rumble winner. It was later revealed that the reason why Lesnar would go over, was due to Angle taking time off to “recover” from injuries. Turns out, once again, he had been wrestling with another broken freaking neck. He would have to undergo surgery to repair spinal, as well as nerve damage, calcium buildup, bone spurs, and intervertebral disc problems. Kurt banked on half way repairing his neck, by only removing the bone spurs, and certain pieces of discs, rather than completely allowing a full surgery to totally repair his neck. We later learned in a WWE Network special, that Kurt opted for the partial repair, so that his recovery time would be reduced from a year, to three months. That’s how competitive Kurt Angle was. Kurt would return in June of 2003, just short of three months after dropping the title to Brock at WrestleMania, and would win the WWE Championship once again, in a triple threat versus Brock, and Big Show.

In 2006 it seemed as though the injuries caught up to Kurt. When you couple in a competitive spirit, with a gruesome history of neck injuries, you have a man that was on twenty Percocet’s a day, as revealed by him self. The pain ended up being too much to handle, that he began messing himself up with drugs. He then made the realization that he could no longer bare with the lingering pain, and not get time off. In fact, he wrestled one of his best matches against The Undertaker in 2006, with approximately his 5th broken neck of his career. He’d work a WrestleMania main event in 2006 against Randy Orton, and Rey Mysterio, with the same broken neck he wrestled Undertaker with. The WrestleMania main event was the last straw. He requested his release from WWE, revealing to Vince that it wasn’t just his neck, he had plenty of more lingering injuries, such as his knee, groin, and hamstring. Kurt was granted his release in hopes that not only would he rehab his injuries, but he’d clean up off the drugs. Instead, Kurt just signed with TNA wrestling.

Kurt Angle would eventually sober up, and find his way back home to WWE, and to the Hall of Fame, after 11 years. What was once a dream career, became a nightmare by the time 2006 rolled around. Kurt recalls telling Vince, that he was afraid he was going to kill his-self. Not purposely, but accidentally, due to having to power through the pain of injuries, and wrestle drugged up.

We are glad that Kurt managed to dig himself out of that nightmare, slowly but surely. He’s been sober for years now, and has been in a much better place personally, for years. Kurt is truly one of the toughest people to grace pro-wrestling. It was never a doubt that he was one of the greatest, but his will, determination, and toughness, outweighs his performances by miles. Thank you, Kurt! We appreciate everything you have done for this business, and although risky, we salute you for being such a tough SOB. No broken freakin neck can stop the legend of Kurt Angle.