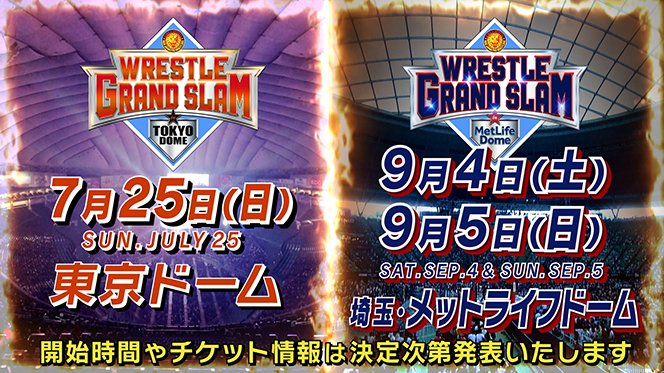 Today during the Kizuna Road show. We saw a VTR for the presentation of the Wrestle Grand Slam dates that were postponed for the Tokyo Dome and sadly cancelled for the home of Yokohama DeNA Baystars, Yokohama Stadium. You can read about that here by Ben Allison.

First we saw the new date for the Tokyo Dome which is July 25th(Sunday). It was featured in the VTR that the main event will be Shingo Takagi defending his title against Kota Ibushi as New Japan said on the VTR and on their official website. After Shingo Takagi beat Kazuchika Okada at Dominion in Osaka-Jo Hall, He called out Kota Ibushi. Honestly I thought it will happen during Kizuna Road but New Japan gave us a better setting for this match. Will The Dragon defeat the Golden Star? Full cards were not announced but I am sure that the card will score a star in Meltzer’s ratings. We sure are very happy that we still got WGS at the Tokyo Dome.

It was not only the Tokyo Dome that will host Wrestle Grand Slam. We will see New Japan’s return to MetLife Dome (FKA Seibu Dome) in Saitama. We will see a 2 day Show in the MetLife Dome. The dates are September 4th and 5th (Saturday, Sunday). The last time we saw New Japan at the MetLife Dome was 7 years ago when Shinsuke Nakamura defeated Kazuchika Okada to win the 24th G1 Climax. I am sure that this event will hit a home run through the ticket sales. No cards were announced for both dates just yet but I’m confident that they won’t disappoint

I am so excited to see these events and to see New Japan bring Grand Slam back and not throwing it away.