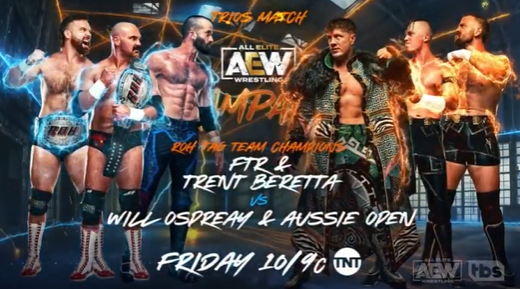 This week’s episode of AEW Rampage will feature Top New Japan Pro-Wrestling star Will Ospreay making his AEW debut alongside Aussie Open to take on FTR and Trent.

Trent addressed the crowd on Wednesday’s AEW Dynamite as he was without his best friends on National Best Friends Day. He was sad because he and Rocky Romero didn’t get a rightful outcome in their ROH Tag Team Title bout against FTR (Cash Wheeler & Dax Harwood) on the May 25 episode of AEW Dynamite.

FTR came out and said his issue should be with Will Ospreay’s “bitch boys” Jeff Cobb & Great-O-Khan of the United Empire, who attacked FTR and Roppongi Vice in the match.

This brought out Will Ospreay, who provided a quick distraction and allowed Aussie Open (Kyle Fletcher & Mark Davis) to attack FTR and Trent. In the end, United Empire stood tall in the middle of the ring.

Also making his in-ring debut will be Satnam Singh in a tag team match alongside Jay Lethal and Sonjay Dutt.

Jake Hager and Eddie Kingston will also go against one another. During the Casino battle royale, Jake Hager eliminated Eddie Kingston, this led to Kingston calling out Hager for a match on Rampage. Red velvet will face Kris Statlander.

Lastly, they will be sending HOOK, and Danhausen will accompany him to address what is next for them.