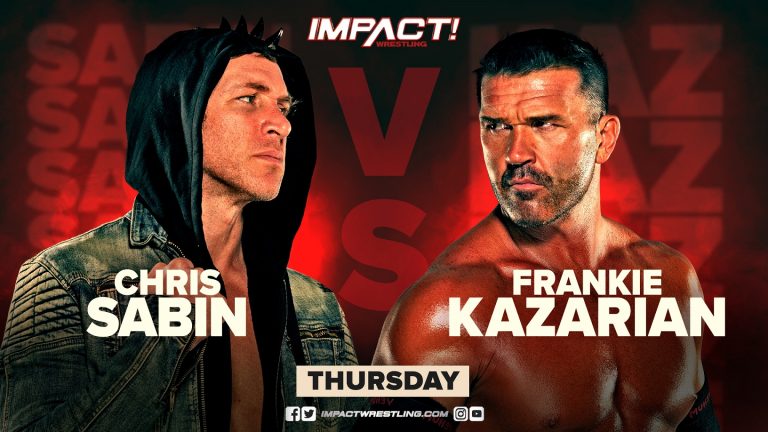 Overall, this was a fantastic go home edition of Impact. In fact, the show felt like it was a mini pay per view in its own right. The best matches on the show were Ace vs Alex and Sabin vs Kaz. Impact also did a great job with the build to Against All Odds. However, while I had no issue with tonight's episode whatsoever, I felt as though they shouldn't have put Against All Odds so soon, just almost two weeks after Slammiversary. Other than that, this was a great episode. Tune in next time…….or read as I’m doing the review here, for Against All Odds.

Preview: Tonight is the go home edition of Impact before Against All Odds. Tonights show consists of Chris Sabin going one on one with Frankie Kazarian, as well as the new tag champs the Good Brothers going against PCO and Vincent of Honor No More. In addition, before the new Knockouts champion Jordynne Grace faces former champion Tasha Steelz, she must first go through Savannah Evans. We also have a fatal 4 way to determine the number one contender against the new X-Divisions champion Mike Bailey and so much more. What will happen? Who will have momentum going forward? Lets find out as the review begins.

Impact opens up with America’s Most Wanted and the Good Brothers talking to PCO to convince him to join the team for the upcoming match tomorrow. However, Vincent interrupts them and tells them to back off and explains PCO is with Honor No More.

GREAT: Our opening match is a Fatal 4 Way match to determine who will face Mike Bailey for the X-Divisions championship at Against All Odds as its Chris Bey vs Steve Maclin vs Laredo vs Trey Miguel. The match begins as each challenger gives it their all. Miguel begins fast as he quickly takes out Kid, followed by a double team by Chris and Steve. We see several manuevuers, followed by powerbombs. Each member goes out of their way to go for a chop fest towards one another, followed by even more maneuvers, such as for high moves, running dives, and even each wrestler attempting their finishing moves. In the end, Trey takes out Chris as he goes for a double knee on Chris and wins the match, earning the right to face Mike Bailey for his X-Divisions championship at Against All Odds.

Result: Trey Miguel pins Chris Bey to get the win.

We get a video package of Raven talking about the upcoming match between Sami Callihan and Moose facing off in Raven’s own creation, “Clockwork Orange House of Fun.” It is then announced Raven will be present for his creation of a match, as well as a run down of the card for tomorrow’s show.

AVERAGE: Up next, Giselle Shaw goes one on one with Rosemary with Taya Valkyrie by ringside. (IIn addition, the Influence joins commentary to see the match.) The match begins as the two lock up. Rosemary throws out Shaw, forcing Shaw to regroup. The match continues as Shaw gains the upper hand as she goes for some clotheslines on Rosemary, followed by whipping her into a corner. After dazing Rosemary for a bit, Shaw tries to get a group picture with the Influence, but they say no. Shaw goes for some strikes and kicks, followed by a pin, but Rosemary kicks out. Shaw tries to go for a running nothing as Rosemary dodges the attack and returns the favor with biting Shaw. Rosemary tries to apply several maneuvers, followed by a cutter off the ropes by Shaw, but not enough as Rosemary kicks out at two. Rosemary returns with a reverse DDT and goes for a pin, but Shaw kicks out. However, just as Rosemary is about to finish off Shaw, the Influence beats up Taya. Unfortunately, this distracts Rosemary but tries to spear Shaw, but Shaw dodges and finishes Rosemary off with a running knee to get the win. After the match, the Influence beat up Rosemary and sent her packing. It ends with the team raising Shaw’s hand. Does that mean she has been welcomed into the group?

Result: Giselle Shaw pins Rosemary to get the win.

Cut to backstage where Mickie James is asked about her upcoming tag team match tomorrow at Against All Odds. Mickie explains her team will win and believes Deonna Purrazzo is the weak link as Mickie explains that she has beaten Deonna once and she can do it again. However, just as she says her name, Deonna as well as Chelsea Green appear, to talk trash to Mickie. This ends with the two double teaming on Mickie, but Mia Yim chases the two off, rescuing Mickie James.

Continuing backstage, Rosemary pulls something out and Taya asks what it is. Rosemary shows it’s a necklace…….a spell  necklace as she summons Father James. Rosemary demands he finds Havok, and finds her he shall.

GOOD: Up next, Jordynne Grace goes one on one with Savannah Evans with Tasha Steelz by ringside. The match begins as the two lock up. Evans goes for some shoulder tackles, followed by some strikes to Grace’ midsection, but it doesn’t do much to Grace. Grace goes for a running slide, but Evans dodges it and follows it with a chokeslam on Grace on the apron. Evans tries to pin Grace but kicks out. Evans continues the onslaught on Grace, but Grace returns the attack with a forearm, followed by a chop. Evans goes for some more maneuvers and more strikes and kicks, but Grace dodges. Grace goes for a spinning back arm. Grace finishes off Evans with a Muscle Buster to get the win.

Result: Jordynne Grace pins Savannah Evans to get the win.

GREAT: Up next, The Good Brothers (Doc Gallows and Karl Anderson) defend their tag team championships against Honor No More (PCO and Vincent). The match begins as Vincent and Karl square off. They each deliver blow after blow towards one another. Soon PCO tags in as he hits Karl with a splash. PCO applies various maneuvers, strikes and kicks to Karl and goes to pin him, but it’s not enough as Karl kicks out at two. Vincent tags in and tries to damage Karl some more, but Karl counters with a spine buster. This gives Karl just enough time to tag in Doc in and is soon all over Vincent with many clotheslines and super kicks. Karl tags in and double team on Vincent with a magic killer, but PCO makes the save as he gets Vincent out of there. Vincent climbs up to go for a flying nothing as Karl uses the most devastating move in all of professional wrestling the surprise roll up to get the win and retain the tag team championship. After the match, the rest of Honor No More beat up the Good Brothers. James Storm tries to help but it’s a numbers game. Soon, Chris Harris puts the fight to vault as both sides are ordering him to go home (for his safety), but then Heath appears, giving Harris and friends the advantage and chase Honor No More out the ring. It ends with the Good Brothers, Heath, James Storm, and Chris Harris (who is questioning on what’s more important as it’s health or wrestling), celebrate

Cut to backstage where Good Brothers, America’s Most Wanted, and Heath celebrate. In addition, Heath and Chris are the final members of the team to face Honor, but James asks Harris if he really wants to do this. Harris explains he’s been working hard to returning and doesn’t want anyone telling him no, so James allows him to officially join the team as they face Honor tomorrow.

AMAZING: Up next, Ace Austin with Chris Bey goes one on one with Alex Zayne. The match begins as both lock up. Each competitor try to out manuevuer one another but it’s not enough and are at a stalemate. Soon, Ace has the upper hand as he unleashes a side flip slam. Ace soon goes for an arm hold but it’s no good. Ace goes for more manuevuers, strikes and kicks to the corner, but Alex counters it with a knee to Ace’s face. The continue fighting both in and out the ring, but in the end, Ace goes for the fold and defeats Alex to get the win.

Result: Ace Austin pins Alex Zayne to get the win.

We get one final run down for tomorrow’s Against All Odds show.

FANTASTIC: And now it’s time for the main event as it’s Chris Sabin going one on one with Frankie “Kaz” Kazarian. Before the match starts, the two shake hands as a sign of mutual respect. The two lock up with lots of submissions, but are unable to gain the advantage. Sabin manages to get some good forearm. Kaz tries to go for a flying nothing, but Sabin counters with an attack to the knee. Sabin goes after the weakened knee in order to gain the advantage. Soon, Sabin tries to get Kaz to submit by putting him in the figure four leg lock, but Kaz reaches the ropes in order to break the hold. Sabin tries to attack Kaz, but Kaz goes for a leg drop on Sabin through the ropes. Kaz goes some more maneuvers in order to bring Sabin down but Sabin won’t stay down. Soon, the two start exchanging strikes towards one another. The match continues as Kaz has Sabin in the submission hold, but Sabin escapes from it. Sabin returns with a DDT to Kaz but it’s not enough as he kicks out. Sabin soon throws Kaz out the ring, following with a running dive to weaken Kaz. In the end, Sabin counters Kaz’ German suplex with a cradle shock to secure the victory. After the match, the two hug each other to show each other’s respect for their hard work. The show ends with the two celebrating.

Overall, this was a fantastic go home edition of Impact. In fact, the show felt like it was a mini pay per view in its own right. The best matches on the show were Ace vs Alex and Sabin vs Kaz. Impact also did a great job with the build to Against All Odds. However, while I had no issue with tonight’s episode whatsoever, I felt as though they shouldn’t have put Against All Odds so soon, just almost two weeks after Slammiversary. Other than that, this was a great episode. Tune in next time…….or read as I’m doing the review here, for Against All Odds.