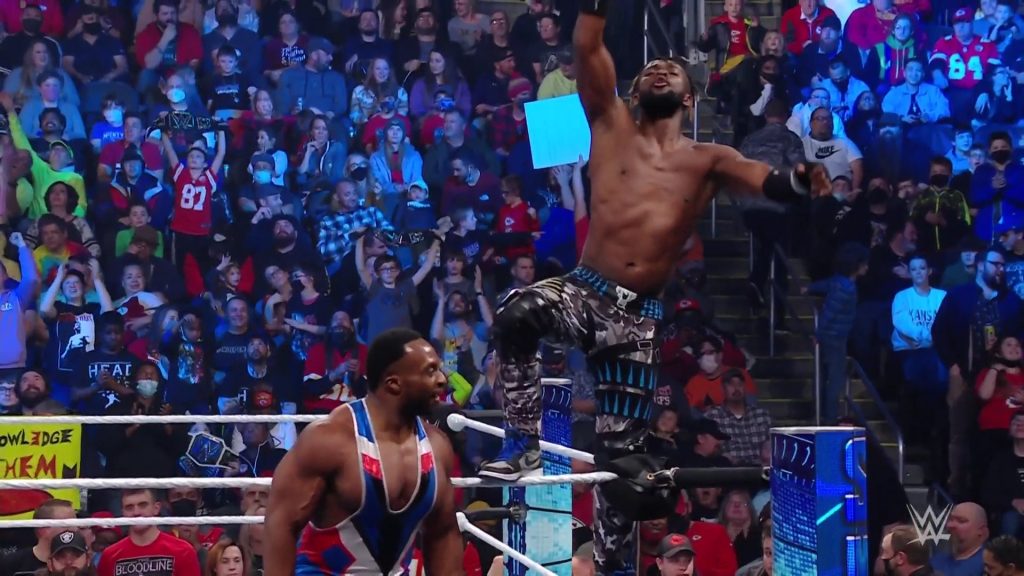 We’re one day away from the Royal Rumble event. Tomorrow marks the official start of the Road to Wrestlemania. However, before that happens we have one final stop. Will Smackdown prove to be an enjoyable go home show? Let’s find out!

AVERAGE: The show kicks off with Charlotte Flair. She puts over the fact that she, as the Smackdown Women’s champion, has officially entered the rumble and if she wins she gets to pick her challenger at Wrestlemania. She says she’s a dominant champion until Shayna Baszler comes out. She says that if it comes down to it she won’t hesitate to eliminate Charlotte to win the rumble and challenge her at Wrestlemania. Aliyah comes out and says that due to her recent momentum, she feels optimistic about her chances in the rumble. Shotzi comes out and simply says she enjoys the chaos that the rumble causes. Sasha Banks finally returns and says she’s ready to rumble. She slaps Charlotte and all of the women begin to brawl. The segment ends with the faces standing tall.

AVERAGE: Ridge Holland is back from his nose injury as he and Sheamus are interviewed backstage. Ridge says that Ricochet is a parasite and will make him pay for breaking his nose. Sheamus is happy to have his protege back and bestows a gift upon him, his face mask for Holland to wear.

GOOD: Up next we have Sheamus and Ridge Holland vs Cesaro and Ricochet. This was a fun match to open the show with. Both teams looked good here and this was a good comeback match for Ridge. The match ends with Sheamus hitting Ricochet with the Brogue kick for the win.

GOOD: Up next is Naomi vs Sonya Deville. Before the match Sonya is backstage talking to a referee. She wants him to essentially help her win, but the ref he’ll call the match right down the middle. This match started very slow but definitely picked up towards the end. Sonya looked good here and I’m happy she actually wrestled for a majority of it. Naomi eventually wins after hitting the rear view followed by a split legged moonsault.

AVERAGE: Naomi cuts an emotional promo afterwards, elated that she’s finally beaten Sonya. She tells Sonya to get lost, but Sonya comes back out with her blazer which gives her her power as an authority figure back. She announces another surprise entrant in the Rumble match, herself.

AVERAGE: The Usos are backstage and are asked about the face off with Seth and Roman tonight. They don’t care because the Bloodline remains strong. The Viking Raiders show up with axes and talk about the many uses they have for said axes.

AVERAGE: Up next is a new addition of In- Zayn with special guests Jinder Mahal and Shanky. Sami Zayn says that the last couple of weeks with pranks got out of hand, so the show is now a live podcast. He talks to Jinder and Shanky, disparaging Johnny Knoxville and Jackass as something not even on India’s radar. However, Jinder and Shanky reveal to actually be fans of Jackass. Rick Boogs and Shinsuke Nakamura come out for the next match and take out Sami.

AVERAGE: Immediately after we have Shinsuke Nakamura and Rick Boogs vs Jinder Mahal and Shanky. This was an alright match but nothing special. The only real highlight was that this was another Rick Boogs showcase, going as far as to hit an impressive Boogs Cruise on Shanky for the win.

AVERAGE: Up next we have our main event as the New Day takes on Happy Corbin and Madcap Moss. This was another average match and wasn’t anything of real substance. The New Day win after hitting the Midnight Hour.

GREAT: Finally we have the face off between Seth Rollins and Roman Reigns. Roman tells Seth to stop living in the past, but Seth uses the past to his advantage by reminding Roman of all the times he’s undermined his successes, most notably breaking up the shield. This actually gets under the skin of the Tribal Chief, who says that he’s never forgiven Seth for that and he hates him. Seth simply laughs, to which Roman is irate that he’s treating this as a joke. Roman slaps Seth and goes to leave. He attempts the Superman Punch, but Rollins knows better and gets out of the way to end the show.

Overall, this Smackdown had virtually nothing of substance. It had a few bright spots like Sonya vs Naomi being a pleasant surprise and Roman and Seth being entertaining as always, but most of the show amounted to nothing. Average matches and average segments led to a rather skippable go home show.