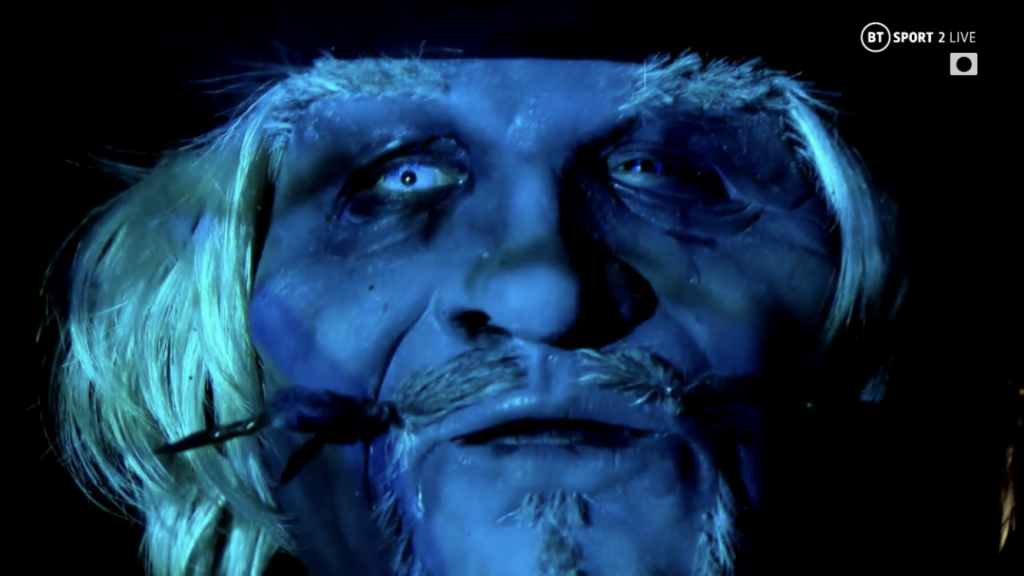 The Character Uncle Howdy is now thought to be played by Bo Dallas, who is rumored to be returning to the company.

Fans everywhere rejoiced when Bray Wyatt finally made his long-awaited return to WWE last month following Extreme Rules. The star was shockingly released from his contract early last year as part of a massive string of cuts.

However, ever since Triple H took over creative following Vince McMahon’s retirement, a lot of stars have returned. Fans saw yesterday that Bray won’t be the last to come back as Emma made her return against Ronda Rousey.

Last night, fans got their clearest look at Bray’s new persona, Uncle Howdy, who’ll be featured in a new faction. No one knows yet who is behind the mask, but fans have already spotted a clue about the star’s identity.

Is Uncle Howdy Played By a Familiar Face?

When looking at Uncle Howdy’s right ear, a cross earring can be seen dangling from his ear. For those who don’t recognize this piece of jewelry, Bo Dallas used to wear an earring just like it.

Bo Dallas is Bray Wyatt’s brother and a former NXT Champion before his less-than-satisfactory main roster run. Like Bray, Bo was released as part of the string of cuts, but he was among the first to go.

There are already rumors circulating that Bo could be in store for a return like others before him. He would be a perfect fit for Bray’s new stable, and he is more than deserving of a legitimate run.

Before being released, Bo was part of a tag team with Curtis Axel, and the two would become tag champions. Before that, Bo was languishing away on the lower card and mainly being getting destroyed in squash matches.

Bo Dallas is one of many deserving a second chance on the main roster, but we’ll have to see what happens.