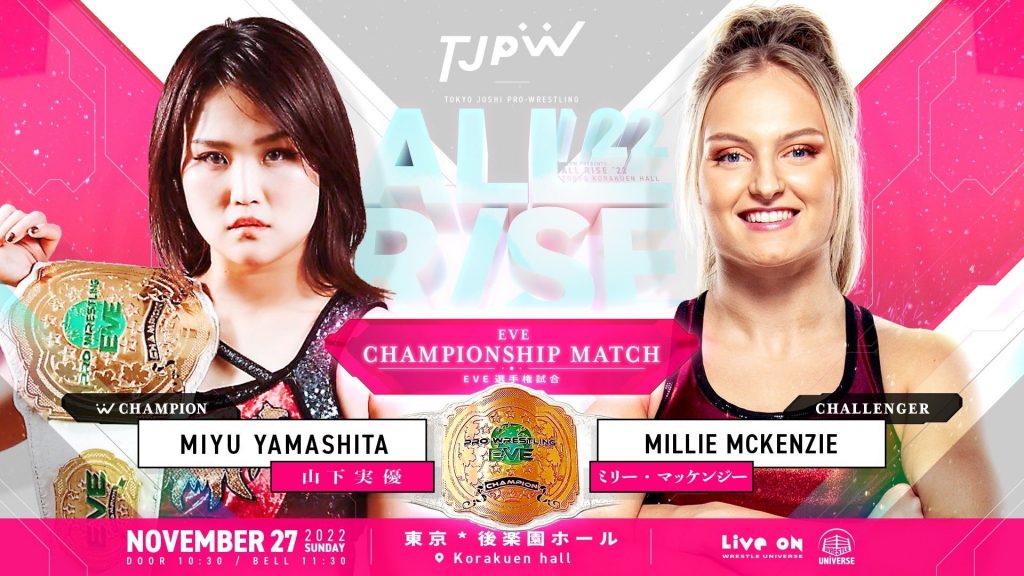 As noted recently on social media, Miyu Yamashita vs Millie McKenzie and a Princess Tag Team Title match have been set for TJPW ALL RISE ‘22

Tokyo Joshi Pro-Wrestling have been through some very busy weeks recently, with the hosting of many enjoyable events as a part of their Autumn Tour.

Even though their focus is currently set on the Autumn Tour, TJPW are also preparing to host another big PPV event this upcoming November 27th, named TJPW ALL RISE ‘22.

The promotion had previously announced that the main event would feature a Princess of Princess Title Match, with champion Yuka Sakazaki making her first title defense against 17-year-old American rising star Billie Starkz.

However, as noted recently on TJPW’s social media accounts, two more matches have been added to the ALL RISE ‘22 matchcard. Via Twitter, TJPW revealed that Miyu Yamashita- who recently became Pro Wrestling EVE’s Champion- will be making her first title defense against former NXT UK star Millie McKenzie.

Additionally, after issuing a challenge to the reigning Princess Tag Team Champions during TJPW’s latest event, Raku & Yuki Aino will be challenging champions Saki Akai & Yuki Arai for the titles during this event.

With the addition of Miyu Yamashita vs Millie McKenzie and the Princess Tag Team Title match, TJPW ALL RISE ‘22 will feature the following matches:

Please keep in mind that the matchcard is still subject to change, since TJPW will be announcing more matches within the next few days.

Stay tuned to Wrestling Republic, as we’ll be covering the complete results of TJPW ALL RISE ‘22 and updating you with everything you need to know about Japanese wrestling.