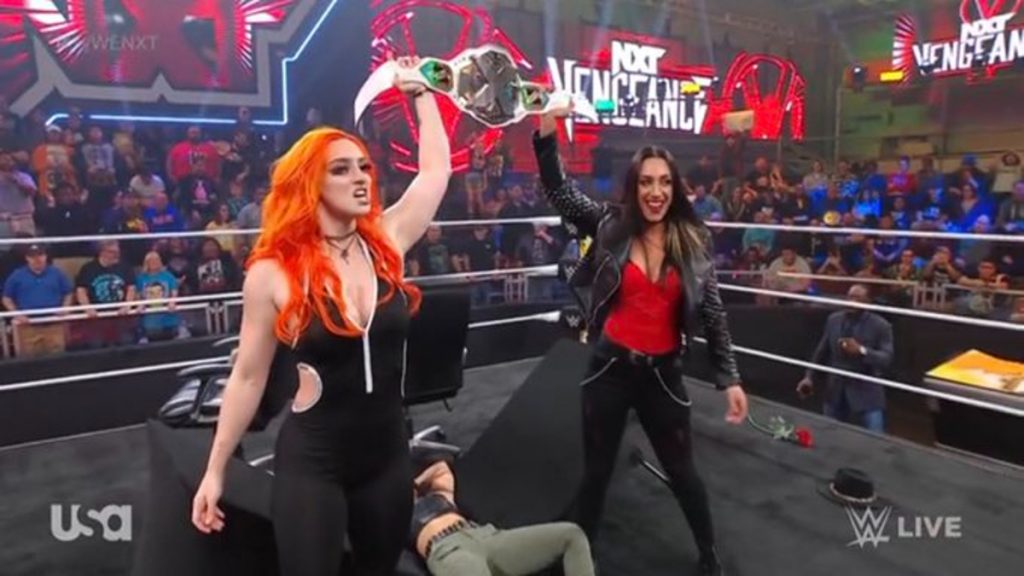 On tonight’s episode of NXT: Roxanne Perez, Gigi Dolin, and Jacy Jayne have a summit. What will be discussed? Wendy Choo faces off against Elektra Lopez. Will Lopez pick up the win or will Choo out her opponent to sleep? Kayden Carter and Katana Chance defend the NXT Women’s Tag Team Championships against Alba Fyre. Who will team with Fyre in the challenge for Gold? An award ceremony for Thea Hail. How will Andre Chase honor one of his top students? And Indi Hartwell battles Tiffany Stratton.

Footage is shown of Grayson Waller starting a fight in the performance center with Bron Breakker.

This was a match in which Hartwell was looking for revenge. She attacked Stratton before the bell rang and later swatted Stratton’s attempt at a handshake. Later in the match, Stratton focused on submission moves. When that didn’t work, Stratton faked an injury to lower Hartwell’s defenses. She won the match on a moonsault.

Jacy Jayne told McKenzie Mitchell that she intentionally attacked her former partner. Jayne said she carried Toxic Attraction and promised something big at the championship summit.

A training session between Drew Gulak and Diamond Mine nearly turned into a fight between Julius Creed and Gulak.

After using not family-friendly words in his speech, Andre Chase presented Hale with an award commemorating her first win. As Hale started to talk, JD McDonagh interrupted the ceremony. McDonagh told Chase U they were a bunch of losers for celebrating one win. Andre Chase defended his honor by challenging McDonagh to a match.

Chase dropped McDonagh with a belly-to-back suplex after the two men exchanged sleeper holds. Andre Chase thought he picked up the victory after a Canadian destroyer but McDonagh got his foot on the rope. The turning point came when Chase was distracted by Duke Hudson leaving ringside. JD McDonagh picked up the win via The Devil Inside.

Results: JD McDonagh by Pinfall via Devil Inside

Showing the tension between them, Henley tagged herself in right after the bell rang. They were able to build their chemistry throughout the match. Despite their differences, James and Henly overcame the tension to pick up the win.

The New Day invited the Dyad and Blade and Enofe a chance to earn a spot in their title match.

Apollo Crews and Carmelo Hayes agree to a two out of three falls match at Vengeance Day.

GOOD the Creed Brothers vs Drew Gulak and Hank Walker:

The Creeds dropped Walker with a flurry of fireman’s carries. Later on, Gulak looked to embarrass Brutus with multiple slaps to the face. He countered with a German suplex. The Creeds nearly pinned Hank Walker with some creative offense but Gulak broke up the pin. The turning point came when Charlie Dempsey distracted Drew Gulak. Brutus Creed made the pin after a Brutus Ball. After the match, Indus Sheer challenged the Creed Brothers to a match.

Results: the Creed Brothers by Pinfall via Brutus Ball

Gigi Dolin said she would give Jacy Jayne a piece of her mind as Toxic Attraction continues to fall apart.

Lopez showed off her style but she wasn’t just fighting for herself, she was trying to prove to Valentina Feroz that she is worth following. Lopez tried to submit Choo but Choo broke out of it. In the finish, Lopez won the match after using a weapon, unbeknownst to the referee.

Brooks Jensen booked a title match for Fallon Henley and Kiana James but Henly was upset by the blindside.

Stevie Turner announced that her debut on NXT will come next week.

Donning his own NXT Championship belt, Waller talked about how he would dethrone Breakker and leave the champion having nightmares. Bron Breakker came to the ring to fight Waller, as the rest of the locker room tried to separate them. Breakker tried to spear Waller but he missed and went through the barricade.

Fyre originally was going to challenge for the tag titles by herself, but Ruca joined her just before the match began. Ruca and Fyre showed potential, with Ruca showing a splash off the top rope. However, Carter and Chance retained after a 450 SPlash. After the match, Fallon Henly and Kiana James announced that Henley agreed to team up with James for a title match.

Results: Kayden Carter and Katana Chance by Pinfall via 450 splash

Nikkita Lyons was attacked in the parking lot.

Duke Hudson got himself and Andre Chase into the New Day Invitational.

This segment started off with Dolin and Jayne sniping at each other. Perez told the two challengers that the chaos in their relationship is karma. It was all a ruse, however, as Dolin and Jayne teamed up to put Perez through the table.

This was an average episode of NXT. The matches were ok but none of them was anything special. If I had to pick a highlight, I would say it was the tag match between the Creed Brothers and Hank Walker and Drew Gulak. Pretty good action and the end of the match saw Indus Sheer challenge the Creeds. The lowlight was the Elektra Lopez match. The action wasn’t great and the storytelling was ok.

Matches are the lowest-rated part of the show because none of the matches were great. The show structure suffered from the ending feeling chaotic and lacking highlight matches. The atmosphere was decent at times but wasn’t top-notch. Several storylines were advanced although I’m not sure what Toxic Attraction accomplished with their swerve. Production was good as usual but again without a special theme.