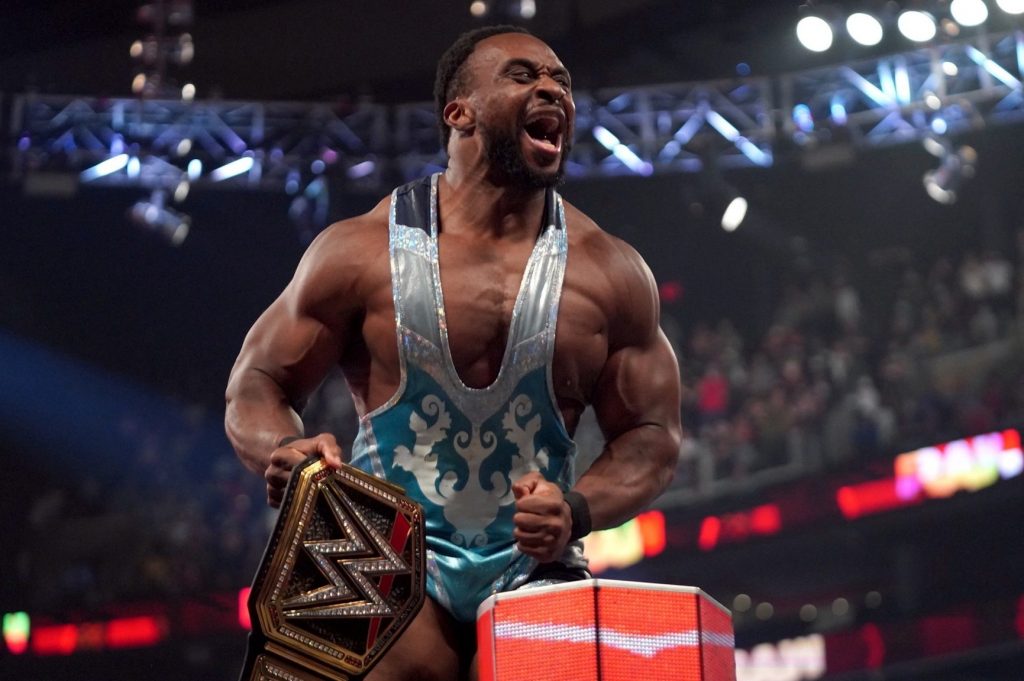 Big E has won the WWE Championship and for the time being all is right in the world. Ettore Ewan the man known as Big E Langston is exactly what the WWE universe wanted. Even though it seems WWE is throwing shit at a wall right now to see what sticks with looming competition from AEW and Monday Night Football. However, a deserved champion will always be a deserved champion, and Big E is a deserved champion. The moment that deserved champion is crowned is never not a feel good moment. Like the time before Dark Side of the Ring came along and destroyed your childhood heroes. Pour one out for poor old Tommy Dreamer. He must have had some the publicist as AOC who recently thought it be wise to wear a dress that had the words “tax the rich” draped over it at an event held for the elite (not the Young Bucks, the 1%). It is actually unbelievable that neither Dreamer or AOC incidents were perpetuated by WWE booking. The WWE booking has actually been stark in contrast. Over the past few weeks, the booking has been solid from WWE. In large part that has to a lot to do with picking the right person to be champ. Big E was the absolute right choice. This was no title change simply to create a moment or add the number of titles held to build up a particular wrestler (please see Nikki A.S.H. cashing in on Charlotte to win the title). Big E earned this. In return, the fans got a moment to rejoice. This title change was long over due. We are witnessing what it is like to have a credible challenger use the Money-In-The-Bank clause. What a novel idea! It has lead to the engaging storylines we have right now centering around the championship title. Big E was built the right way and because of it we now have interesting future storylines surrounding the title. Lashley, Drew McIntyre and Roman Reigns all have credible claims to the throne, while a whole bunch more have a personal issue with Big E. We at the Wrestling Republic examine the top ten challengers to Big E’s title.

The New Day and The Bloodline tore the house down on the 20th of September’s edition of Monday Night Raw. The WWE’s lack of tag teams and love of splitting up tag teams means any long term tag teams like the Usos and the New Day are guaranteed to have history.  The Usos have battled the New Day religiously over the past few years. They are WWE’s answer to Lucha Bros & Young Bucks.  A break in case of emergency five-star match. The hell in a cell match between the two teams might be the best hell in a cell match to actually occur at the pay-per-view’s namesake. Why not add Big E’s brothers & Roman’s footmen to the mix knowing it will result in a classic? Perhaps New Day could reclaim the Raw tag titles and these 6 men could battle for all the belts. An added bonus if Roman Reigns and the Usos win both belts we would get a Paul Heyman sermon for the ages. Big E could win the title back on a Monday night main event to leave each show with a champion but in the mean time throw these 6 guys in a hell in a cell, or elimination chamber or ladders tables and chairs match or better yet give us all of them and let these two teams tear the house down once again.

A WrestleMania New Day triple threat main event just seems right. Now the fact that the New Day never broke up even when they had a brand split was a stroke of genius. It was a rare move by WWE not to insult the older die hard fans. Every other promotion has these groups with history that remain connected despite not being involved in a current storyline. It made Big E’s cash-in more meaningful knowing we would be getting some future New Day matches. The WWE Championship being involved means we can get a New Day triple threat without breaking up the New Day.  Big E is a deserving champion and should keep the belt long enough to main event WrestleMania. Kofi has years of Royal Rumble moments doesn’t it just make sense for him to finally win one. As for Xavier Woods, the man has come along way from the Apollo Creed days. He could easily finagle his way into the match as he was the founding member of New Day. Turning slightly heel during the build up claiming both Big E and Kofi would have been ‘future endeavored’ years ago if not for Xavier and that they owe him their careers.  Afterwards the triple threat, the New Day can all embrace in throwback to WrestleMania 20, with men who have travelled the hard long arduous road together are embracing each other as they have just scaled pro wrestling’s Everest together.