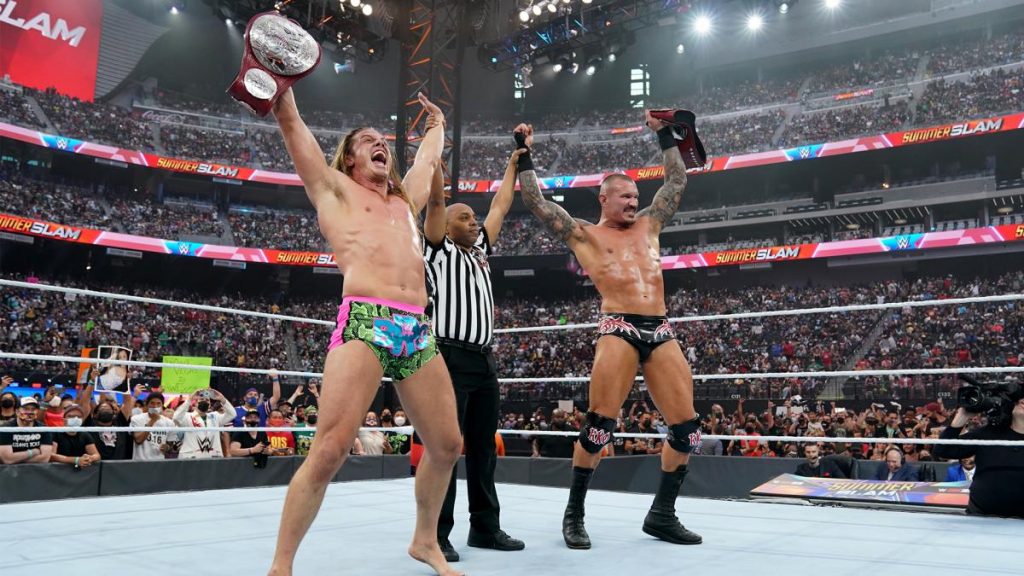 All Out, SummerSlam and Crown Jewel have all come and gone. Those of us who find ourselves in the unfortunate situation of living in the northern hemisphere must now head inside for a beer. Real life Ric Flair impersonator Dave Portnoy posted an educational video of apple picking. No shit, as someone foreign to apple picking I found it strangely riveting. Perhaps I am also entering the Autumn of my life. Yes, Summer is over.  In the world of professional wrestling, it has been eventful. C.M. Punk has returned. Bryan Danielson and Adam Cole both jumped ship. We had three of the best pay-per-views of the year. Big E has finally claimed the WWE Championship and Ric Flair keeps doing Ric Flair things. Do not google “Ric Flair Train”. The summer, however, belongs to the mishmash WWE Raw tag team champions – RK-BRO. Randy Orton and Matt Riddle received high praise from Mick Foley very early in their tenure together and to no one’s surprise Foley was right. RK-BRO have gone to new heights. The Wrestling Republic take a look at the top ten teams we want to see challenge for the tag team championship.

The Briscoe Brothers debuting on WWE programming, attacking RK-BRO through the crowd, would be a rare win for the WWE. Lately every talent that is available signs with Tony Khan and AEW. WWE really need a talent acquisition win. This has to be it. Long before AEW and after the demise of ECW, Ring of Honor (ROH) was the standard bearer of North American based Professional Wrestling alternate to the WWE. Unfortunately, ROH will go the way of ECW and like ECW it will hold a special place in the history of Professional Wrestling. The best talent to represent ROH may just be the tag team wrestling savants – Jay & Mark Briscoe.  When examining the ROH alumni, it is a class that features a man who held the WWE title for a then modern record of 462 days. The leader of a certain positive movement who had the biggest WrestleMania runs in recent history and one third of the greatest faction in WWE history, hell the current WWE Championship program is featuring two former ROH talents. Yet the Briscoe Brothers stand alone.  The Briscoe Brothers are the biggest free agents in the business. After all the ill-feelings towards all the roster cuts, this acquisition can single handedly turn that around with the WWE Raw tag team titles scene the talk of fans everywhere.