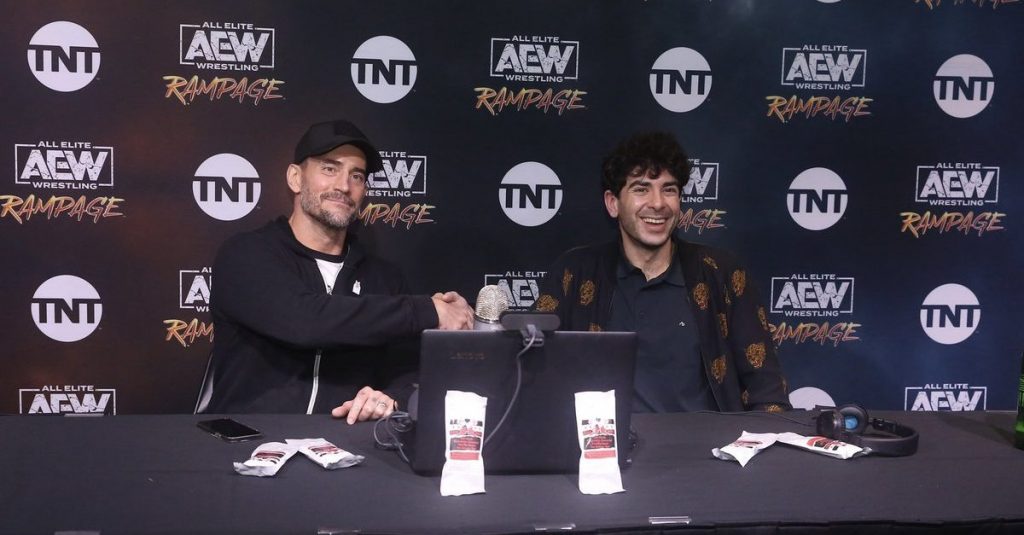 AEW President Tony Khan gave major praise to CM Punk during Thursday’s media call. Khan claimed that anyone who’s stepped in the ring with Punk, has come out a better wrestler.

Ahead of Sunday’s Double Or Nothing Pay-Per-View, Tony Khan did one of his quarterly pre PPV media calls last night.

“CM Punk has come in so far and had a great series of matches with wrestlers of all different experience levels.” Khan told the media “Against younger wrestlers who, even for their age, have tons of experience like Daniel Garcia and Darby Allin, but also some of the great veterans along the way and people who are a mix of the two.”

The AEW President then went on to bring MJF’s feud with CM Punk into the conversation.

“MJF is another person who has a ton of experience for his age. I believe the people who have wrestled CM Punk, no matter the result, so far, have come out for the better have reached a bigger audience and have learned in the process.”

During the media call, MJF seemingly took offence to some things said about him by Khan. You can read more about that here.

“CM Punk is somebody who, continuously, surprises me and amazes me.” Khan continued. “He helped grow our business when he arrived here. In particular helped put a spotlight on the young wrestlers. He’s also been a really good mentor backstage, in addition to just helping people’s wallets, potentially, by getting everybody in a better position in this company by helping us get more fans, selling more pay-per-views and more merchandise. He’s been that guy. But he’s also been somebody that will help mentor wrestlers and will watch matches after the fact, matches they’ve had with him or other people.”

“A number of people will watch all their matches with CM Punk.” The AEW President proceeded. “He’s been a great mentor to a lot of men and women in our locker room. He brings a mindset of giving back, in particular to the younger wrestlers, but also somebody who has done a lot for the veteran wrestlers here. In doing so, he’s wrestled a lot of matches. He’s won a lot of matches.

He’s helped us by not only being a great mentor, but by being involved in really compelling television that has helped AEW a lot. Including his program with MJF, that is probably one of the most personal rivalries ever in pro wrestling in terms of how strong the build was, how much you really wanted to see their pay-per-view match, the intensity between them. CM Punk has helped everybody in AEW so far. As to how he can do that as champion, we’ll see going into the pay-per-view if that’ll happen. Right now we have the greatest champion in pro wrestling.” (H/T Fightful for the transcription)

CM Punk will take on Hangman Page this Sunday at Double Of Nothing. If Punk wins the match he will win the AEW World Championship.