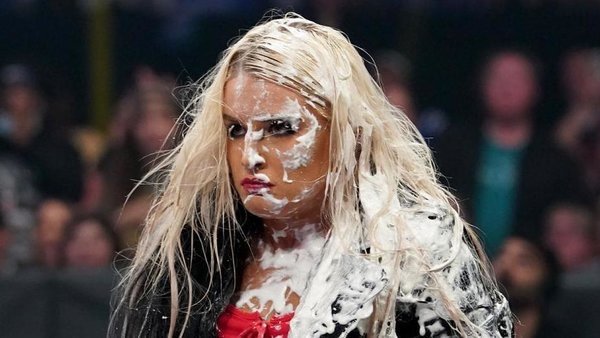 Former WWE star Toni Storm has revealed in an interview with AEW Unrestricted, that WWE had previously asked her if she would be comfortable with Charlotte Flair stripping her during a segment on SmackDown.

On the November 26th episode of WWE SmackDown, Charlotte Flair ‘humiliated’ Toni Storm by throwing a pie in her face.

The segment was criticised by many fans following the show, but Toni Storm has now revealed she was happy with how the segment played out, saying it was much better than the original idea.

Speaking on a recent episode of AEW Unrestricted, the former NXT UK Women’s Champion was asked if this was the last straw for her before asking for her release.

“I was actually quite happy with that segment that day” Storm surprisingly revealed. “It was a lot better than the original idea. The original idea was like, I was called up and asked if I was comfortable having my shirt ripped off or something. They wanted to do this whole angle where they wanted to rip my shirt off to be embarrassed, in my underwear, I guess.

When you’re asked if you’re comfortable to do that and literally, people are being fired every single week, it’s like, ‘Well, yeah, I guess I’m comfortable with that.’ [said with nervous sarcasm]. Then, a lot of people fought to not have that happen. That would have been a terrible idea. To be honest, the pie was actually quite a sweet treat in comparison to what it could have been.

In hindsight, I don’t really mad. I’m not even mad. People think I’m mad, I think it’s hilarious, standing there covered in pie. I can demolish food, so if they’re throwing food at me, that was a good day. Not painful at all. That was a good one, to be honest. That was one of my better times,” (Via AEW Unrestricted H/T Fightful)

Toni Storm was granted her release from WWE at the end of last year, leading to her signing and making her debut for AEW on March 30th 2022.